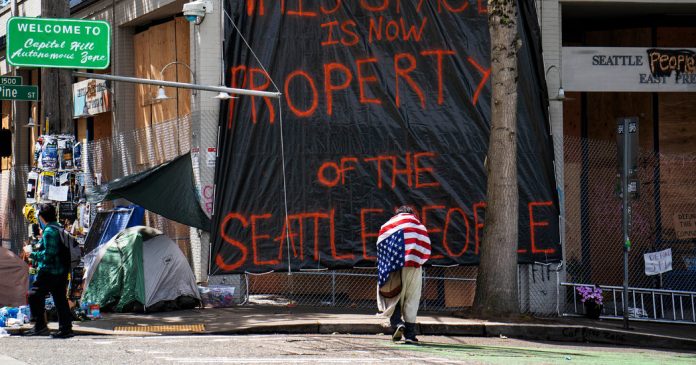 One person died and another was critically injured by gunfire early Saturday morning inside a portion of a Seattle neighborhood that has been occupied by protesters for more than a week, officials said.

The shootings unfolded at a protester-run region known as the Capitol Hill Autonomous Zone or the Capitol Hill Organized Protest area. It has been celebrated as a “no cop” zone, and the Seattle Police Department wrote in a statement that detectives were investigating the shooting “despite the challenges presented by the circumstances.”

This month, the city made the unusual decision to abandon a police station in the Capitol Hill neighborhood, board up the windows and let protesters have free rein outside, in the wake of demonstrations nationwide over the death of George Floyd in Minneapolis police custody.

Protesters laid claim to several city blocks and put up a banner on the front entrance of the emptied police station reading, “This space is now property of the Seattle people.” The zone, with the atmosphere of a street festival or commune frequented by families during daytime hours, drew the ire of President Trump, who called on Twitter for officials to crack down on protesters and declared that “Domestic Terrorists have taken over Seattle.”

On Saturday, records show officers responding to a report of shots fired at Cal Anderson Park around 2:20 a.m.

John Moore, 23, a volunteer medic working inside the zone, said he believed there were two separate shootings. He was less than 150 feet away from the first one, treating someone who had been punched in the face during some confrontations in the crowd, when he heard about six to eight shots.

After assessing the scene and rushing to grab a bag of medical supplies, he said, people in the crowd brought the first victim to his team. Mr. Moore said the person had a gunshot wound in a shoulder and another in a thigh, and the medics began treatment. The victim had a pulse for about two minutes before it stopped. The team performed CPR.

Instead, Mr. Moore said, the group planned to meet the Fire Department at a previously designated intersection outside of the zone. But after getting the person in a truck while continuing CPR, the group arrived at the intersection to find nobody waiting there. So they continued to a hospital.

Mr. Moore expressed frustration about the lack of aid, although he said it might not have made a difference given the victim’s dire condition. He said other medics treating the second victim nearby also reported difficulties with getting support.

The Fire Department did not return a call seeking comment on Saturday.

The Seattle police said in a statement that the suspect or suspects fled, and that the motive was unknown.

“Officers attempted to locate a shooting victim but were met by a violent crowd that prevented officers’ safe access to the victims,” the police statement said.

Videos taken at the scene and posted on social media by Converge Media showed the volunteer medics racing through crowds of onlookers in the pre-dawn darkness. Tensions were high as some protesters appeared to object to the arrival of the police.

As armed officers in riot gear entered the zone, people screamed, “The victim left the premises!” At one point, protesters briefly surrounded a police car and then yelled, as the vehicle sped away, “Whose streets? Our streets!”

The police said they were eventually informed that two men had been transported to a hospital by the protest camp’s medics. A 19-year-old man died and another man was being treated for life-threatening injuries, the authorities said.

Gov. Jay Inslee said on Saturday that he was saddened to hear of a shooting and was still gathering information about what had occurred. But he said it was clear that the government needed to be able to provide protection for all citizens, including in that zone, and that “other options” might need to be explored.

“We have to have a way to provide police services and fire services in that area,” Mr. Inslee said.

Mr. Moore said he did not think policing would have helped prevent the shooting. And he said the act of violence was not reason to shut down the protest zone, which has been advocating reforms to policing and other parts of government.

“We are out here because officials are not doing their jobs,” Mr. Moore said. “They are not listening to us. They refuse to make any meaningful concessions.”