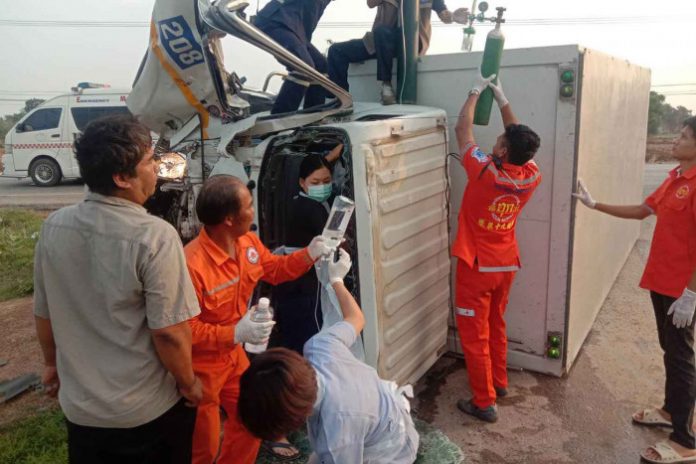 Rescuers break into the front section of a six-wheeled truck to help two men, who were seriously injured and trapped inside, out of the vehicle. The truck collided with a pick-up on Highway 202 in Nakhon Ratchasima’s Sida district, leaving one killed and two injured. (Photo: Prasit Tangprasert)

NAKHON RATCHASIMA: One man was killed and two other people seriously injured when two ice trucks collided on Wednesday morning.

Pol Capt Bantoon Srithiang, a Sida police duty officer, said the accident occurred at about 7.30am on Highway 202 near Ban Nong No in Sida district.

Local residents said while a pick-up loaded with ice was heading for Sida district at high speed, one of its tyres burst. This caused the vehicle to swerve across the middle line to collide head-on with an oncoming six-wheel truck, also loaded with ice.

Chatchai Jaemnoy, 26, the driver of the first vehicle, was killed. Two other men were trapped in the other ice truck, seriously injured. They were extracted from the wreck by rescuers from Hook 31 Rescue Unit and rushed to Sida Hospital.

Police were investigating to establish the actual cause of the accident.