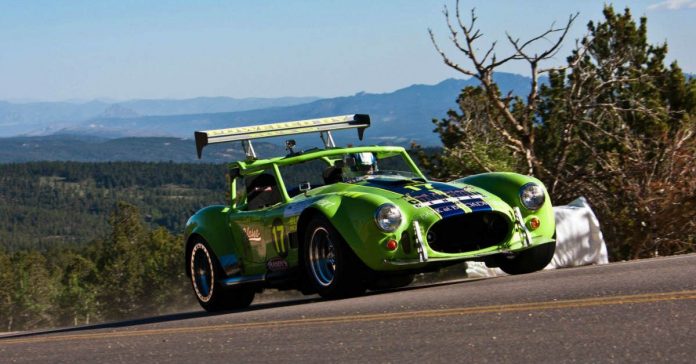 Needing little introduction, Pikes Peak is one of the most demanding motorsports in history, over 14 miles in length encompassing 156 turns twisting and turning to the finish line at 14,115 feet.

Race To The Clouds tests drivers and cars to their limits, from concept cars to production cars the competition is always closely contested.

Taking the outright record in 2018, in a sense-making up for the ongoing VW emissions scandal, Romain Dumas at the wheel of VW’s ID.R concept shaved 15 seconds off the previous record with a time of 7 minutes 57 seconds. Twin electric motors generate 680hp, 480ft-lbs of torque combined with a total weight of 2400lb results in 60mph in 2.25 seconds.

Pure electric vehicles have advantages over internal combustion engines when it comes to acceleration with high torque figures available at lower motor speeds. While these characteristics are beneficial for hill climb events, a vehicles maximum speed is better served by higher horsepower.

Competition success for Bentley has previously been restricted to Le Mans or GT racing series until 2019 with a factory-prepared Continental GT set the record for a production road car. Setting a time of 10 minutes 18 seconds, a full 8 seconds faster than the previous record-holder, a Porsche 911 turbo is no mean feat.

Standard production cars are gaining ever more powerful engines, and Bentley has never been lacking for power, Continental GTs packing 6-liter W12 engines and 626hp and of course all-wheel drive to help things along.

No strangers to Pikes Peak, Peugeot over the years has developed and entered several cars based on production models, their latest a heavily modified 208 model. Rest assured this is no ordinary 208, in place of the standard car’s engine sits a twin-turbocharged 3.2-liter V6 engine with 875hp on tap.

With more power than most supercars and weighing just 875 kg, 0-62mph vanishes in the blink of an eye taking 1.8 seconds – faster than modern F1 cars.

7 Toyota Tacoma – Tacoma in Name Only

Excellent traction is a well-known specialty of all 911 models with their rear-mounted engined layout adding weight over the rear wheels. Heavily modified for the 2019 Time Attack 1 class, BBI Autosport’s 911 GT3 boasts a twin-turbocharged 3.8-liter 900hp motor breaking the existing record with a new time of 9 minutes 23 seconds.

RELATED: Ranking The 10 Fastest Porsches Ever Made

Motorsport should be open to all-comers, teams, and privateers competing on a level playing field. No more than a group of friends took the outright win in 2019, operating from a homage garage with a used Wolf GB08 chassis fitted with a Honda sourced 2-liter racing engine.

Making the best use of 600hp and a low 1100lbs weight, driver Robin Schute stormed across the finishing line in 9 minutes 12 seconds, a full 11 seconds ahead of second place.

4 Shelby Cobra Replica/Propane – Green In More Ways Than One

Sporting its lurid green paint job, this Cobra replica is not just green on the outside, under the hood an all American V8 motor running on Propane. Converting cars to burn Propane isn’t new technology with kits available for most cars. Still competitive? Sure this 5.7-liter Chevy powered Cobra reached the summit in 11 mins 57 seconds, a record for LPG power.

Any alternative fuel is sure to have plus and minus points, Propane power does produce fewer miles per gallon, but is cheaper to buy. Most importantly from an environmental point of view, Propane produces up to 60% less carbon helping to save the planet in the process.

No racing event would be complete without Porsche’s 935 model, seen here based on a later 911 GT2 RS model.  The traditional flat-six pushes out 700hp courtesy of 3.8-liters and twin turbochargers, while carbon-fiber reduces weight to just 3000lbs enabling Jeff Zwart to cross the line in 9 minutes 43 seconds

All publicity is good publicity, right? Unscheduled off-road moments did damage Tesla’s Model 3 entrant but didn’t prevent the team from completing the course.

Even the name Charger seems fitting for the annual Pikes Peak Hillclimb event, the latest generation boasting 707hp should be quick to the summit. Minor engine modifications to help the 6.2-liter Supercharged V8 breathe at higher altitudes, otherwise, this is a stock SRT Hellcat,

NEXT: Here’s Why NASCAR Racing Is Harder Than Everyone Thinks


Next
Cars You Didn’t Know Shared The Same Engines

Global Water Truck market 2020 to rise at an impressive xx%...

Road Trip: Our Guide to Eating and Drinking in Yellow Springs...