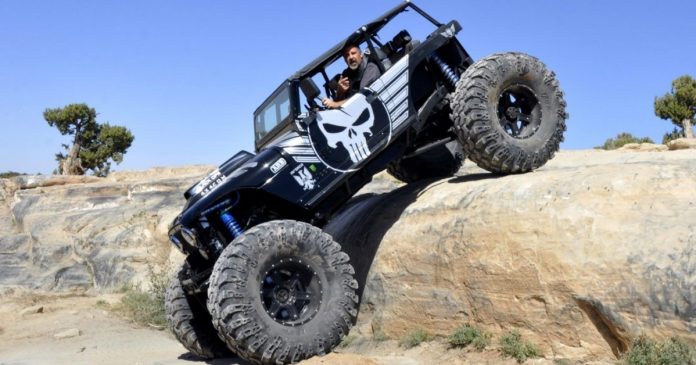 Not all roads are paved. Sometimes, getting to a specific destination requires a bit more than four wheels, an engine, and some fuel. Thankfully, some tuners understand that what is given to drivers nowadays is just not enough. Though you may not need a zombie killing machine on a daily basis, it always nice to have one nearby.

Whether it is a rock crawler, a mud bogger, or simply an “anomaly”, observing these creatures evolve in the wild is always a satisfying feeling. Usually associated with being redneck, those creatures are anything but bland and forgettable. For them, a giant rock formation or a lake as deep as the Atlantic Ocean is nothing but a bump on the road.

To avoid trashing your car’s suspension, among other parts, it is crucial that you slow down when approaching a major pothole. The same applies to a speedbump. It is a safe, responsible, and effective manner to approach an obstacle. However, if you happen to drive a crazily modded monster truck, forget the aforementioned advice and crank up your engine.

It would have been a lot more entertaining to see the ice-cream man pulling up in the neighborhood, doing backflips and flying 20ft above ground. Even if the track has been engineered to generate as much “safe” entertainment as possible, most of the obstacles found on the course are death wishes if approached with a mini crossover.

Jeeps are absolutely gorgeous trucks. With a reputation as solid as a rock, it is understandable that outdoors and off-road lovers are eyeing the brand with scrutiny. This special custom edition, the Black Ops, can basically climb anything.

RELATED: 5 Modified Jeeps We’d Love To Own (5 We Don’t Want To Be Associated With)

The driver of this specific Jeep CJ7, with The Punisher sticker on the door, seems to be telling his progeny to stop messing around and to get a butt home since tomorrow is a school day. With a truck that can access pretty any remote places of a given countryside area, it is safe to say going home is the most sensible thing to do.

8 When You Need To Cool Down

ATVs are fun. They are very modular and fast. The best part is that they can be almost completely submerged in mud or water and still function properly. This particular driver seems to have had a need for a dip.

He seems as if floating in swamp water while sitting in his lifted ATV RZR is, well, pretty cool. Extreme off-road drivers will recognize the satisfaction associated with beating the odds. Is that a life-jacket behind the headrest? The driver’s video is available on YouTube.

Southern California is the land of the Toyota Tacoma. Whether it is at your university, job, at the supermarket, or at the most inaccessible place in the state, Tacomas will be there 8 times out of 10. Thanks to the state’s rugged nature, testing new mods and the great resilience of this mid-size truck is amply possible.

RELATED: 7 Pickups That Are In Danger Of Rolling Over (8 That Are As Steady As A Rock)

For a state that is portrayed as being environmentally friendly, the amount of gas-guzzling truck owners is quite large. Though it may infuriate Greta Thunberg, it gives truck fans out there the possibility to meet like-minded people and go on snowy, sandy, rocky, or muddy adventures. With a decently modded Tacoma, some beautiful places can become accessible.

6 From Russia With Love

Straight out of Russia, crazy looking beige truck named Sherp ATV. Ah, Russia. A country that never ceases to amaze. This two-seater has no bound. It is highly versatile and therefore comfortable on most terrains including water. Yes. Water. With a price tag of $65,000, the Sherp ATV might be among the most expensive and biggest stock ATV on the world market.

RELATED: These People Tried To Build Their Own 4x4s… And Failed Miserably

Although it seems like a Cold War-era prototype, this 40hp moving thing seems to satisfy its creators. It is widely unknown whether the project was picked up by Lada or any soviet car manufacturers.

The Diesel Brothers were made popular thanks to their unholy customized trucks. Most of their trucks, American-made trucks, undergo what could be considered as an indecent amount of transformation. In comparison, Nicki Minaj and Kim Kardashian seem to have never had recourse to plastic surgery.

This lifted Ford F-650 two-toned limo is the equivalent of glamping for rock crawling. Though it is capable of overcoming most obstacles that some other trucks cannot, this F-650 remains a very luxurious and polluting vehicle that is perfect for a weekend getaway with the squad.

Elon Musk is definitely an interesting character. His numerous successful ventures have been so inspiring that it became a great marketing tool for his Tesla brand. Similarly to Musk, some Tesla owners can be a bit crazy.

This particular Tesla Model 3 owner figured that tank treads may help him a great deal in a snowy environment. Although it is somewhat debatable whether the treads are helpful or not, one thing that is for sure is that car aficionados would love to see this Tesla in action.

The most interesting feature of serious rock crawlers is the suspensions. The truck itself may seem to remain fairly level, but the wheels are going up and down as well as left and right. This highly transformed Ford F-250 can go through Joshua Tree National Park and Grand Canyon National Park without ever having to look for an alternative route.

It is unfortunate that getting to Havasupai Falls by car is forbidden. This particular truck would have been perfect to enjoy the scenery while getting some serious adrenaline rushes. Only drawback: where to put all the camping gear?

2 Ford Trucks Can Swim, Too

Some Ford trucks are made to climb rocks. Others are made to swim/ bathe in mud. Both uses are very region-specific. Mudding (or mud bogging) is a very Southern tradition due to the swampy landscapes found there. Often associated with being redneck, mudding is still a very entertaining use of outrageously lifted pick-up trucks.

It is highly unlikely that spectators will stumble upon a Toyota truck there. In this part of the country, everything is American, from the beer to the truck. Southerners take it a step further by having lifted trucks jump over other lifted trucks. Yeeha!

The Southwestern part of the US, due to its arid weather, it’s home to some of the most beautiful and challenging rock formations. It is then logical that rock crawling became popular among sports drivers in the region. Unlike amateur rock crawling with moderately modified trucks, professional rock crawling requires some serious custom work.

As you can see, the Jeep in this picture may not be street-legal and that is ok. As look as its roar and ability to climb rocks are there to satisfy spectators, there is nothing else car fans can ask for.

NEXT: We Can’t Stop Staring At These Modified Mid-Sized Trucks


Next
Ranking The Fastest Chevrolets Ever Made

Return to Sanhok as PUBG Season 8, new Challenger and Payback...

Comprehensive Analysis on Telematics in Trucks Market based on types and...