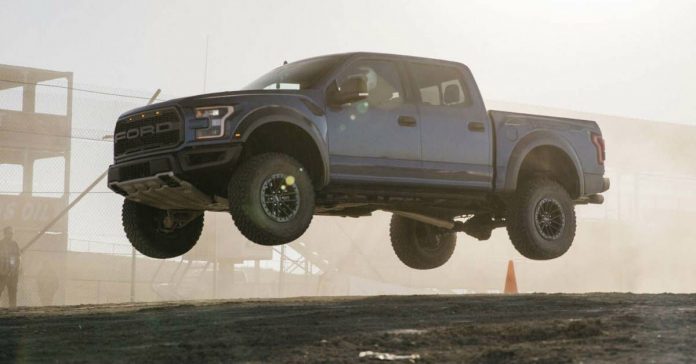 Normally, trucks are used for work. The guys who got behind the wheel of these trucks, however, decided to catch as much air as possible.

The thrill of weightlessness that adrenalin junkies crave is often an experience that is out of their control on a roller coaster or in a falling elevator. Off-roading gives drivers the chance to push their bodies and trucks to the limit, jumping over crests creates the weightlessness feeling more commonly dubbed “getting air”.

Anything dangerous or exciting causes an adrenalin rush, something highly addictive that junkies crave more and more attempting longer and faster jumps – often in vehicles that were never intended to be driven that way.

Semi drivers spend countless hours traversing the highways of America hauling pretty much anything they can fit in their trailers. You would think in their downtime they would want to get away from their rigs?

This Ford LTL owner had different ideas. Achieving a distance of 101ft and landing in one piece, able to drive away afterward, in a truck normally used to haul loads up to 61,000lbs is very impressive.

Once a familiar sight on the Paris Dakar rally as a support vehicle, the JSC Kamaz has since found rally success as a competitor itself. Everything about the Kamaz is big, weighing in at 9.5 tons and capable of reaching a limited 140kmh requires enormous power.

Equipped with a 13-liter turbodiesel engine producing 1150hp naturally driving all four wheels that weigh 150kgs each. As to be expected the Kamaz has quite a thirst for fuel-burning up to 200 liters every 100km under full load.

With its immense popularity spanning 43 years as the best-selling pick-up truck in the US, it should come as no surprise to see owners taking testing the limits of their vehicles. In standard factory specification, Raptors make great off-roaders able to cope with the roughest terrain with little effort.

Owners are well catered for with aftermarket long-travel suspension kits making the F-150 a great truck for off-road racing, where getting airborne is a necessity to be quick.

Formula 1 team Lotus powered and sponsored by Renault set a world record in 2014 by jumping one of the teams Renault Magnum trucks over a moving F1 car, managing to clear a distance of 83ft.

Renault Magnum trucks are not designed for speed with a maximum speed of 81mph, and weighing 18,000 kgs excluding the trailer is quite an achievement while avoiding crushing the multi-million dollar F1 car in the process. As publicity stunts go this is a good one, and no other team has attempted it since.

6 Bowler Nemesis – How Range Rovers Should Be Built

Bowler started out modifying and tuning Land Rover SUVs before moving into the custom-designed and built off-road market. Arriving in 2006, the Nemesis model bears some visual similarity with the Range Rover utilizing the grille and light clusters.

Bowler has produced a road version of the Nemesis but ultimately the truck is designed to compete in rally raid events where the space frame chassis strengths are evident. Under the hood owners have the choice of 4 or 4.2-liter engines with the top specification model also being supercharged.

Little introduction is needed for one of the most famous monster trucks, Grave Digger, originally built in 1982 using the bodyshell from a 1957 pick-up. Monster trucks are all about exciting displays for the fans, whether its crushing cars, racing head-to-head or, just getting airborne they make great crowd-pleasers.

Dodge updated the RAM model in 2019 to great success with average monthly sales now much closer to the F-150 Raptor range. Buyers can specify the air-suspension set-up providing a smoother ride, but off-road use is better suited to the aftermarket suspension lift kits giving a better ride height allowing faster rough terrain driving.

Even in base model spec with its V6 engine, the RAM 1500 has enough power to make those all-important jumps.

Being produced in limited numbers the Mercedes G63 6×6 unlike any other civilian SUV has a third powered axle making it a 6-wheel-drive off-roader. Built using the body of the standard car mounted to a lengthened chassis to accommodate the additional axle, the interior maintains the normal luxury refinements.

Under the hood, AMG carried out the tuning of the 5.5-liter V8 engine raising power output to 536hp although for safety purposes the G63 is limited to a top speed of 100mph.

In one form or another Toyota’s Hilux has been produced for over 50 years, earning a reputation for being robust and reliable. Tested to destruction by Top Gear and later famously drive to the North Pole the Hilux can be found in even the most inhospitable and remote locations.

No surprises that it would prove to be suitable for the Dakar Rally, Toyota Gazoo Racing have entered the 2020 event with a modified Hilux sporting a V8 5.0-liter engine producing 385hp and 458lb-ft under the hood.

Newcomers to motorsport, Robby Gordon’s Stadium Super Truck series, a real crowd-pleaser, often features as a support series for other events. Similar in format to NASCAR the trucks themselves are customs designed sharing only the appearance of the truck range they are based on.

Custom chassis and suspension allow drivers to race on asphalt at high speed and also perform huge jumps, sometimes up to 130ft in length. Anyone who fancies a drive with $25,000 in their pocket and a suitable crash helmet can have a go.

NEXT: These Owners Decided To Take Their Supercars Off-Road