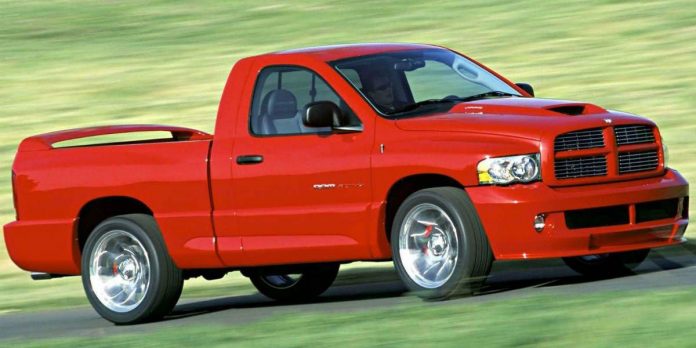 Aside from cowboy hats and hotdogs, a pickup truck is the true definition of what America is all about. The sheer monstrosity of a muscle truck filled with luxury, power, and engineering has been around for decades and the Dodge brand is no exception.

Over the years, Dodge has proven to be among the best in the automotive industry when it comes to trucks, along with Ford and GM. RAM was first introduced in 1981, which became an independent brand divided from Chrysler in 2010, was part of the pickup line up Dodge has been offering ever since it was founded in 1900.

Introduced in 1960, the Dodge D series was an all American icon with a Chrysler A engine under the hood. The D100 comes with a V8 engine option as standard, with the first generation of the D series topping a horsepower range of 365 for the high-performance package. The D100 was redesigned continuously, each look being bolder and more masculine than the previous one until it reached a halt in 1993.

Manufactured in Michigan, the D100 had the signature chrome grille with straight or narrow beds in the back. Adventurer trim packages were later added, and a little known fun fact is that in the early 70’s a sporty trim package called The Dude was offered for only 2 years, pretty trendy and fashionable for such a muscle truck back in the day.

A powerful light-duty pickup truck, the Ram Daytona has been a legend for years carrying the name of Dodge up high. The Daytona has a unique performance package including an insane 5.7-liter HEMI engine, producing 345 hp and 375 lb-ft of torque, and a 5-speed automatic transmission.

Appearance-wise, the Daytona is a real beauty that comes in 2 custom paint jobs, it has a sporty hood scoop, 20-inch chrome wheels, and an angry rear spoiler that screams master of the road. Whether on the road or on the track, the Daytona destroys all tracks that stand in its way, and it does it savagely.

The Ram Dakota rose up high in the early 90s, proving that Dodge yet again is the road king. The Dakota was available in 3 engine trim levels of which the 5.2L Magnum V8 was is the most powerful among the first generation producing 230hp and 280 torques. The Dakota was also available as a convertible truck to boost sales, which was not a very demanded option but nevertheless the first of its kind.

The Dakota moved on to be even more successful in the late 90s/ early 2000s in terms of sales and recognition, with the best in its class features such as having the highest towing capacity and the most stable steering column. The Dakota later became available in a sport upgrade with new performance tires and a heavy-duty four-speed automatic later after that onto its third generation.

With a limited-slip differential and bench seats, the Ram D150 is a mixture between a farm vehicle and a manly truck to own. The D150 is one of those cars that generate a sense of joy and belonging every time the owner bonds with it. The D150 had the Cummins engine, which is the most important diesel engine for light and medium-duty trucks as well as school buses, producing 160 hp and 400 lb·ft of torque.

This truck is a typical product of the ’80s on through the ’90s with a square boxy shape and a raw masculine feel. The D150 was excellent for hauling and farm work around the ranch, this was back when trucks were utilitarian vehicles not knowing what asphalt was.

Before leather interiors and sunroofs were even introduced, the D150 defines what a truck was all about, a smelly carbon dioxide burning vehicle that was loud and uncomfortable to ride in. But, even if it felt like a chore riding trucks back in the day, they were a charm to be in, and they guaranteed to put a smile on the owner’s face all day.

Although the Dodge B series was only sold for 5 years, it was still a worthy pickup to be put with the best. Underneath the glossy green hood is a flathead straight-six engine with a starting base power of 95hp.

On the rear is a spacious cargo bed, and on the sides were the signature Dodge logo metallic letters along with matching wheels and cross-steering arrangement. The B1 is a timeless truck in terms of looks and purpose, it is an old-school beauty ready for duty!

What is the ultimate performance pickup truck of all time? Well, that title goes to the Dodge Ram Srt-10. With an 8.3 liter V10 straight from the Dodge Viper, the Srt-10 is a small light truck with a short bed and a short cab, add these two ingredients together and you get a recipe for destruction!

A 500hp range on a heavy-duty pickup truck, which is lowered to suit its sporty sense, is a concept that is monstrous and bizarre to any car enthusiast which is why it is the ultimate dream truck.

The Ram Srt-10 has an aerodynamic spoiler that comes standard on this model, and a massive hood scoop on the front for that extra aggressive appeal and for engine cooling purposes. The Srt-10 has one of the most massive engine soundtracks of all time, it is music to the driver’s ears. With comfortable leather seats and a luxury interior, the Srt-10 is a demon on the track and a spacious powerful old-school truck on the road.

A four-wheel-drive medium-duty truck first introduced in 1945, the Dodge Power Wagon is a beast of a machine. The Power Wagon is a towing and hauling truck built for forestry and ranching back in the world war 2 days, the sales curve was so high they are pretty rare to find nowadays.

Equipped with a flathead straight-six engine in the first model, the Power Wagon is a vertical climbing machine capable of pulling just anything that comes in its way. The Power Wagon started off as a troop transport and moved on to the US Air Force before it was available to the public on the open road.

Need a heavy-duty pickup truck? Look no further than the Dodge Ram 2500, a truck with a towing power of 20,000 to 35,000 pounds and the most comfortable customized interior making it Rolls-Royce luxury level. The ultimate trim is the Limited that comes with a Cummins turbo diesel as optional, an inline 6-cylinder motor with 370hp and 850 lb-ft of torque making the Dodge 2500 a highly capable vehicle on the road.

The 2500 is swanky on the inside of plenty of wood grain choices and leather stitching all over the interior, it also comes with high tech gauges and the massive cutting edge 12-inch screen that is common on many Dodge models making it the best in the business. The center console is another feature carried on from the 1500 model onto the 2500, which is extremely spacious and multitasked. All in all, the 2500 is a great choice both on-road and off-road.

Along with chrome tow hooks, an automatic step-up, parking sensors, and a massive front end garnished with chrome. The 3500 gives you an interior premium feel with lots of leather stitching and 360 view cameras on the 12-inch screen, as well as the maneuverability and crisp handling which sits on a very comfortable suspension.

This is it, everyone’s favorite Ram pickup truck! The Ram 1500 is a very popular and successful truck that has been around for years. A truck with an attitude and road presence, the 1500 has loads of customization options and is available in 6 trim models. Available with a Hemi 5.7 liter engine, the 1500 comes in a V8 option producing 395 hp and 555 torques making it Ford F-150 territory.

The 1500 has plenty of interior room and a 19 speaker sound system with noise cancellation, and of course the Tesla-level 16-inch touch screen just like in the 2500. In terms of ride quality, the 1500 Rebel is the off-roader of the 6 available choices so you get more tire and less rims, but an air ride suspension upgrade can be added for highway high speeds lowering the truck for better grip and reducing drag.


Next
Here Are The Fastest V6-Engined Cars Ever

Jad Hallab is a writer, motion graphics designer, animator, and music producer. He has been involved in several successful projects requiring his skills in infographics, 2D animation, photography, e-commerce, & social media marketing. Currently, he is dedicating time to write for Valnet Inc, covering the Hot Cars website. A graduate of Lebanese American University’s Graphic Design program, writing and producing storyboards has been his passion to create articles and animations especially in topics related to cars, gaming and traveling.

Is Now a Good Time to Buy a Pickup Truck?

Fire next to Salvation Army facility in Perris spreads to field,...

Man Pleads to Running Over 2 Peacocks With His Pickup Truck

Child, 3, Runs Into Road, Hits Side Of Pickup Truck: Cops