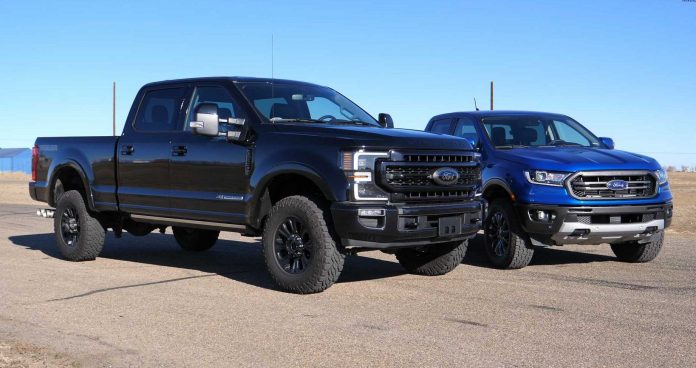 Funded in 1903, Ford is one of the most recognizable automotive brands in the world. The website Statista reports the Ford F-Series truck as the world’s best-selling light truck model in 2019, selling over one million units of its top trim. However, in 2019, Ford’s vehicle wholesales dropped for the third year in a row to about 5.4 million units. The American manufacturer still was a best seller, but with lowering numbers.

RELATED: 10 Times Ford Made A Bad Pickup (5 Times They Blew Everyone Away)

The numbers might drop even more in 2020 and not just because of Covid-19. Recently, Ford has recalled models and buyers have been complaining. Here are the ten most alarming issues with Ford’s new trucks.

This issue was most common to the 2017-2018 Ford F-150, the 2018 Ford Expedition, the Mustang, and Lincoln Navigator vehicles. Specifically, drivers have been complaining about the 10-speed automatic transmission, which is slow in changing gears. Or, sometimes, it changed gear at random. The shift slipped on its own and drivers had unpleasant surprises, such as the car being on the reverse when they thought it was in park.

A class-action lawsuit claims that the “the 10-speed 10R80 automatic transmission equipped in Ford F-150 models can cause life-threatening issues due to harsh shifting, jerking, hesitation and slipped gears.

Once again, a transmission problem for the Ford trucks F-150, F-253,F-254. The gear shit indicators of these trucks are on the display and they are supposed to illuminate each time the driver changes gears. YouTuber Johns Trucks 4Sale made a video to highlight the issue, saying that many of his customers called him for a solution. In the video, he suggest turning on and off the power and the indicators, hoping to solve the problem. The gears disappear from the screen without any reason and many Ford truck owners had to figure out on their own how to solve the issue.

One customer at Ford150.net wrote that anything and nothing seemed to solve the problem. The reviewer wrote, “sometimes even putting the windows down could seemingly allow the gear indicator to come on and we could start the vehicle.”

This issue is most common in 2014-2017 F-150 pickup trucks. These vehicles feature 3.5L Ecoboost engines, which caused troubles to the drivers. When a vehicle loses brake fluid, the drive becomes more difficult and sometimes even impossible. Pickup owners faced increased pedal effort and reduced front brake function, which required greater effort and distance to stop the vehicle.

This issue increased the chances of a crash and Ford moved on it in June 2020. The manufacturer issued owners a notification, stating that “dealers will replace the brake master cylinder and inspect the brake booster, replacing it as necessary, free of charge.

The Takata airbag recall involved five cars and one pickup truck: the Ford Ranger, 2004-2011. Ford’s notification stated that these airbags are most likely to malfunction in areas with high temperatures and high humidity. Vehicles affected didn’t show any signs or any warnings, but some drivers noticed the issues and they tried disabling the airbag.

Ford went as far as advising customers to avoid sitting in the passenger seat, a way around the problem. In 2017, Ford issued a safety recall for 935 model year 2017 Ford F-150, in which the inflator may rupture, cause a crash, and metal fragments might strike the vehicle’s occupants. Certainly an alarming issue.

6 The Spark Plugs Breaking Off

This issue concerns pickup models such as the Expedition, the Lincoln Navigator, the Explorer, the Mercury Mountaineer, and the Lincoln Mark LT. These vehicles have Motorcraft brand spark plugs with a crimped lower electrode shell that becomes coated with carbon, causing it to stick in the cylinder head. Rust and corrosion could cause the same issue and when drivers attempted to unplug the plug, the lower shell broke.

RELATED: Chevy’s 5 Greatest Trucks (And 5 Ford Trucks That Knock Them Out Of Park)

To make matters worse, if any fragments of the electrodes fall into the cylinder, drivers might have to remove the cylinder head to get the debris out. Dealers suggest replacing the Motorcraft spark plugs before they get too many miles on them -over 40,000 miles. In fact, the sparks tend to blow out when the vehicle has between 60,000 and 100,000 miles on it.

These issues concerned Ford pickup trucks like the F-250 and the F-150, the F series. A driver wrote on a forum dedicated to Ford that “the car has started leaking from the rear of the passenger head gasket. Enough to drip on the driveway and exhaust, and have some exhaust smell. It was really disappointing.”

Some of the most common symptoms of the head gasket leak include a rough idle, loss of power, white smoke from the exhaust, and loss of coolant. Mechanics charge as much as $2,000 to fix the issue and some owners simply gave up on their pickup.

4 The Issues With The Windows

The windows Ford 150 and of the 250 models are troublemakers. Often, they got stuck and then refused to come down -or up. One pickup owner on the forum of Car Gurus tried to replace the relay, but with no luck. More Ford owners suggested changing the regulator (the small motor that powers the windows) or it might be the switch. Drivers replaced the switch and still, the door ajar warning sign came on.

The hose is a crucial element in a car since it carries automotive fluids or gases from one part of the vehicle to another. It carries oxygen, fuel, and coolant. These hoses run from fixed points on the chassis to the individual front brake calipers. The 2015-2018 Ford Edge had defective front brake jounce hoses and the manufacturer announced safety recalls in August.

A total of 488,594 pickups in the U.S. and federal territories and 62,876 in Canada and 7,140 in Mexico are affected by this recall. While no accidents were reported, this issues is alarming. Defective hoses could potentially rupture, allowing brake fluid to leak and resulting in a loss of braking function. It is a dangerous defect indeed.

Depending on the pickup model, each vehicle had different contact problems. The F-150 had issues with the defroster of the rear sliding window, for example. Contact needs to happen: between the tab located on the lower edge of the moving portion of the window and the contact tab on the lower portion of the fixed window pane.

If this contact fails, the defroster stops working, causing dangerous situations in extreme weather conditions. The F-150 seems to be unlucky since drivers also faced issues with the gearshiftS. They disengage from the transmission and turn the vehicle incapable of shifting.

In theory, a car’s battery is supposed to last between four and seven years, unless it is the 2019-2020 F-150 battery. Drivers reported battery drained overnight. The cause? The battery cables were secured improperly, which caused them to lose connectivity either intermittently or permanently. A fastener that connects the components might loosen and cause a series of issues, some most serious than others.

Mild symptoms include flickering lights or instruments, while more worrying symptoms can cause smoke or melting. The deadliest one? Fire. This is why once again, Ford recalled 135,725 trucks in the U.S. The fix to this dangerous issue is easy enough: retorque the fastener.

In the past years, Ford has had to recall many vehicles, too many even. The list includes 2011-2013 models as well as more recent ones, from 2019. Last year, the American manufacturer recalled over 1.5 million vehicles, many including pickup trucks. Finding out why this is happening seems to be the secret to solving the issues once and for all.

NEXT: These 10 Trucks Prove Ford Makes The Best Pickups


Next
These Are The Absolute Worst Cars For Beginners

Italian writer who loves pasta, coffee and blogging. I graduated with a BA in Communications from Columbia College Chicago and I have worked ever since in social media, marketing and blogging.
I love good writing, the ironic and fun side of cars and bikes, with colors and trends. What I don’t know, I learn.

Truck Campers Excessive Growth Opportunities Estimated to be Experienced 2018 to...