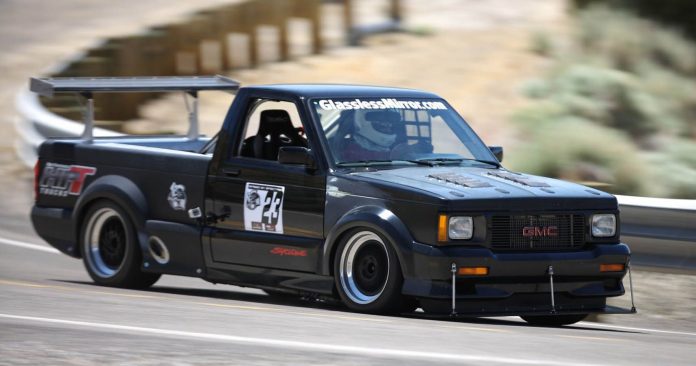 What are pickup trucks for? To haul heavy stuff and help their owners to be the best and most rugged workhorses there are. For most, they are a need and replace the beasts of burden of the past. For others, pickup trucks are a lifestyle choice, no sedans or SUVs for them.

But that said; ultimately, a pickup truck is a working vehicle that comes with a certain amount of off-road worth and can haul or tow decent amounts of weight, while making the driver and the passengers as comfortable as possible.

Yet, there have been pickup trucks made in the history of American automobiles, that do not fit these descriptions at all. These trucks are outrageous when it comes to speed, power, prices, and of course, looks. Why were they made? Well, because why not? If you can reach for the stars, won’t it be fun to go higher?

After the oil embargo-fuelled malaise era of the ‘70s and the stringent emission-controlled ‘80s, the ‘90s brought about a fresh era in automobile power, especially in trucks and SUVs. The Ford F-150 Lightning was one such amalgamation, though its early 1992 avatar came with only 280 horses.

The 454SS badge has been used on many Chevrolet vehicles over the years like the Chevelle, Impala, El Camino, and even the Nova, but it was in 1990 that it came to be borne by a truck.

Chevy’s engineers took a perfectly ordinary Chevrolet 1500 pickup truck with a short bed and swapped the engine for a 454 V8, aka a 7.4-liter V8. The horsepower was only 230-235 but boasted a massive 385 ft-lb of torque and made this ordinary-looking truck take off in a cloud of dust.

With GM doing stuff to the Chevy trucks, GMC could not be left behind, and in 1991 they introduced the Syclone, which to many was the worst pickup truck ever because it could haul to save ass. What it could do, is do things fast. For the GMC, it was a simple S10 body, into which came a 4.3-liter V6 that made 280 horses. A turbocharger was further added in along with a four-speed AT from a Vette, and a performance-based all-wheel-drive. The result was a 0-60 mph sprint of 5.3 seconds which meant that for a short time, a pickup truck became faster than a Ferrari.

Dodge may have floundered for a bit in between, but with cars like the Charger and Challenger, they were always a superior automaking team that reveled in special editions. Enter the Dodge Lil’ Express Truck in 1978, that not only flouted emission rules because it was not a “car” but also became the fastest thing on wheels for that one year. All it took was a standard D series short bed truck and a 5.8-liter V8 in it, along with stacked exhausts and reliable AT. This crazy truck made 225 horses, a number which was big in the late ’70s.

Jeep pickup trucks are not new, and neither is the Gladiator. But the Gladiator 2020 rustled up a fuss because of the time gap between it and its predecessor. In the ‘70s, with bad automobile sales all around, the Jeep Gladiator was no different. So they tried to liven up things with some graphics and made the Gladiator Honcho, which, if bought with the 6.5-liter AMC V8 was a baddie on the road. Sadly, sales remained low and only 1,500 of these were made in the day, and demand crazy high prices today in the classic car bazaar.

The Ford Ranchero was a crazy combination, giving its owner the practicality of a truck, on a car that rode far smoother. The Ranchero GT was a whole new kind of crazy and carried the very potent, 7.0-liter Cobra Jet V8 that turned this car-truck into a truck-car-racing. Now, for insurance purposes, the Cobra Jet engine was rated at 335 horses but in reality, it made closer to 450, turning the sedate Ranchero into a bucking bronco. Needless to say, it was a handful to drive and not many could take to it.

RELATED: 15 All-American Cars That Proved To Be Game Changers

When the Ford Ranchero was introduced in 1957 and began to sell despite being a pickup truck on a car chassis, Chevrolet followed suit with the El Camino in 1959. To match the Ranchero GT’s insane power, they stamped the El Camino with the reliable and powerful 454 SS. As in, the El Camino now got a 7.0-liter V8 that made 450 horses officially, and an unheard-of 500 horses unofficially. To buy one today, you need a crazy bank balance as well.

The Ram SRT-10 is the craziest pickup truck ever because all Dodge did was take a Ram short bed truck and put in the Viper SRT-10 engine in it. What was the SRT engine? It was 8.2-liter V10 insanity that made 500 horses officially but went a lot higher than that in real life. The fuel economy was the very pits, in single digits, but this truck could go 0-60 mph in less than five seconds and cost you a whopping $45,000. There was no practicality to this, it was simply all about performance, in crazy colors.

When Lincoln decided that it needed to have a truck, too, it simply took a Ford F-150 and lux’d it up to insane amounts. So yes, it was practical, because at heart it was a Ford F-150. But it had pin-striping on the streets and a carpeted bed and was probably driven around by English butlers called Reeves. If you could afford this truck and at $52,000, that was a big if, it was an absolute delight that took away everything you hated about a Ford F-150 and replaced it with buttery comfort.

If we tell you of a vehicle that has a 3.5-liter turbocharged V6, jetting out 450 horses on a 10-speed AT and less-than 5-second 0-60 mph times, you’d probably think we are talking of a $200,000+ supercar. Well, nope. These are authentic figures of the Ford F-150 Raptor, and this is one truck that comes warranty-laden and off-road ready. It is still very much in production and by far has to be the craziest truck in the market since 2009 considering people are still lining up for it.

NEXT: 5 Great Pickups With Hideous Paint Jobs (5 Bad Ones Modified To Perfection)


Next
Here Are The 10 Most Influential Supercars In Automotive History

Arun Singh Pundir has been a longtime media crackerjack and worked most of his life in sales and marketing. In 2018, he officially flipped and switched sides to the editorial. He lives with his wife, two rascally sons and is a car and motorcycle nut in his free time. Not that he has too much free time. He currently writes for HotCars on anything that has any number or kind of wheels. He is also penning pop culture, lifestyle and all things rich for TheRichest. For now, he considers his Isuzu D-Max V-Cross, Suzuki Ciaz, and Royal Enfield Classic 500, the three current flames of his life. His dream is to drive around the world; even if it takes more than eighty days.

2 killed in crash involving motorcyle, truck, and car at Karnack...