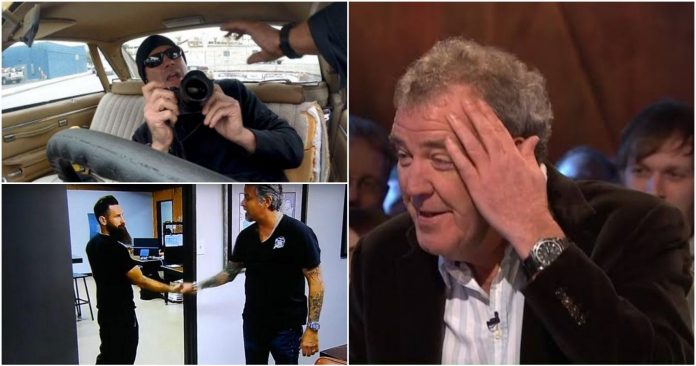 The number of car TV shows available to car lovers exploded in the last decade. In the past, our high-quality car show options were limited to Top Gear, Jay Leno’s Garage, and a few others.

Today, car lovers are spoilt for choice. There are new shows that are centered around the chemistry and expertise of the hosts like The Grand Tour and Fast N’ Loud, and there are also build-it shows like Overhaulin’, West Coast Customs, and many others.

Nowadays, if you ever feel like getting some automotive excitement, all you need to do is turn on the TV, and you have a wealth of options to choose from. Many of these shows are great and, they have provided car lovers with a ton of information and entertainment over the years.

However, there have been instances where these shows have made mistakes – big mistakes that have left the viewership both confused and annoyed.

Top Gear is the most popular car TV show on the planet, and it is safe to say that when any of its hosts messes up, it becomes a major issue. During his time as a host of Top Gear, Jeremy Clarkson reviewed the Tesla Roadster, and the vehicle was shown to have run out power after the car was taken for a few laps.

However, this wasn’t true, and the car never ran out of power – the show was merely trying to prove a point that electric cars are limited by performance. The gaffe attracted a lot of criticism, and the BBC was forced to admit that the Tesla Roadster didn’t run out of power.

9 When Jeremy Clarkson Suggested That British Workers Should Be Executed

Jeremy Clarkson is no stranger to controversy, and his mouth got him into trouble again. At the time this particular episode of Top Gear was filmed, British workers were on strike, and Jeremy Clarkson wasn’t happy about it. According to him, the workers were entitled to gilt-edged pensions and thus had no right to go on strike. He claimed that he would have executed all the workers in front of their families. It is of little surprise that such a statement didn’t go down well with the public. He was forced to apologize to British trade unions.

There were three hosts during Jeremy Clarkson’s time at Top Gear, and yet he alone is responsible for three of the four Top Gear related messes in this list. He was test-driving a Toyota pick-up truck when he got the strange idea to ram the truck into a tree in other to test its strength. The locals initially thought it was an accident, but when they discovered it was done by Top Gear, they were very unhappy about the stunt. BBC had to pay compensation to the local parish council and apologize for the destroyed tree.

‘Captain Slow’ has Richard Hammond is fondly called on Top Gear seems to have fallen under the bad influence of Jeremy Clarkson. The show’s hosts were reviewing Mexican cars, and Richard Hammond claimed that Mexican cars would be lazy and overweight- a clear insinuation that Mexicans are lazy and fat. Jeremy Clarkson also joked that there will be no complaints because the Mexican ambassador would likely be asleep. Unfortunately for them, he was awake, and he duly sent a letter to the BBC complaining about the inappropriate conduct of the Top Gear hosts.

RELATED: Top Gear: 18 Times They Messed Up On Screen (But We Didn’t Notice)

The news that fan-favorite Aaron Kaufman would be leaving the Fast N’ Loud car show was already known to the large majority of the fans of the show. This is why fans were not too happy with the episode where the crew expressed feigned surprise when Aaron told them he would be leaving the show. Richard Rawlings even went to the extent of begging Aaron to stay onboard. The major draw of Fast N’ Loud as always been its originality, and this episode fell short in that respect.

The central concept behind Fast N’ Loud is that the hosts will acquire run-down vehicles, restore them, and sell them for a huge profit. The problem we have is with the restoration stage. During the first few seasons of Fast N’ Loud, the projects were simpler, and it was easy for anyone who knows anything about cars to believe the timeline. Naturally, over the years, the projects have gotten more complicated, and thus, they require more time to complete. However, the show had been insulting the intelligence of viewers, and modifications that we know should take weeks are seemingly done in a few hours.

4 Gas Monkey Bar Filling A Defamation Suit Against Its Founder

You know things are pretty messed up when a company decides to take its founder to court. Richard Rawlings helms the Gas Monkey Garage of the Fast N’ Loud show, and the Gas Monkey Bar N’ Grill is located close to the garage. The restaurant has initiated a $6million defamation suit against Richard on the grounds that he has been disruptive and has engaged in deceitful attempts to get out of his contract with the restaurant. Richard has denied these accusations, and we will closely watch how it will all play out in court.

3 The Poorly Modified Oldsmobile In Episode 442 Of Overhaulin’

Overhaulin’ is helmed by legendary designer, Chip Foose and we are quite disappointed that he allowed a car under his supervision to be handled recklessly by his crew. The owner of this car reported that there were numerous mistakes in the car after the build and that he tried to contact the show but got no response. He also claims that he warned the crew that the vehicle wasn’t fit for highway use but they still drove it on the highway nonetheless. This made the vehicle overheat and breakdown.

The reputation and skillset of its hosts may be beyond repute, but the show’s penchant for using low-cost car parts for its builds has severely impaired their reliability. TV shows are filmed on a tight budget, and that may explain why the show heavily relies on donated or cheap car parts. However, the downside to this is low-build quality, and owners who are already elated about getting their dream cars may end up disappointed after using their cars for a few years.

A core rule of Overhaulin’ is that the car owner must be unaware that their cars are undergoing modifications to preserve the element of genuine surprise when the finished product is delivered. The problem is that the show’s hosts will go to any length to trick the car owner. Thefts and phony legal schemes were often used and the most memorable incident was when Glen – one of the crew members, was punched by a car owner after he smashed a guitar into his Porsche. Fortunately, the show has stopped this practice.


Next
10 Performance Mods That Actually Make Your Car Worse

Joseph is a freelance writer, who is trained as a lawyer. He currently works as a car journalist for Hotcars.com and as a freelance travel writer for Trip101. He is a car lover and a big fan of Top Gear and the Amazon- The Grand Tour show. He also enjoys traveling and playing badminton.

Electric Trucks Will Be True Signal of Electric Vehicle Era