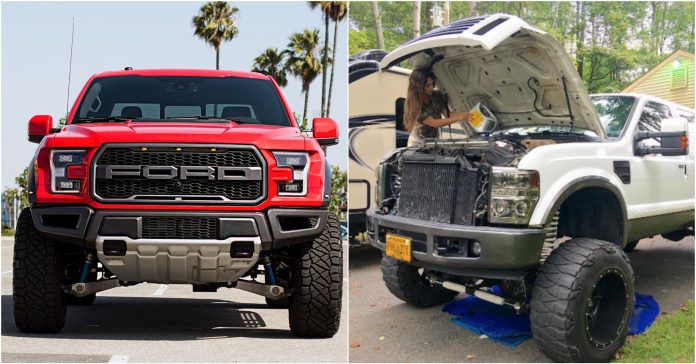 50 years ago, muscle cars were the car segment that everyone identified Americans with; today, it’s pickup trucks. The trucks have almost come to embody the American spirit, and you would be hard-pressed to find a place in the US where there aren’t any pickup owners. And one of the companies that helped make America the land of the world’s greatest pickup trucks has undeniably got to be Ford.

The blue oval has made a lot of trucks over the years. This ranges from the first F-series trucks launched in the 1940s and all the way to that of the latest trucks such as the ground-shattering Ford F-150 Raptor. But, with such a long legacy, it’s hardly a surprise that not every Ford truck ever was a good one. In fact, some were quite bad.

Well, on this list we have 10 of the best and 5 of the worst trucks that the Ford Motor Company has produced in its century-old history.

In 1974 Ford introduced the extended cab on its F-series of trucks dubbed the SuperCab. No rear doors were featured on it and the two-wheel-drive was the only option available. Plus, the three-speed manual gearbox Ford gave the truck didn’t cut it, making the truck very sluggish. It was overall just an unimpressive machine, even by that era’s standards.

The Ford F-150 is the main truck that Ford produces, along with the bigger versions – the F-250 and the F-350. But the 2004 F-150 really let the consumers down. The engine was a big problem, with multiple breakdowns reported. No big failures, just lots of road-side breakdowns. A rare blip for the range that was thankfully fixed in newer generations.

The Ford F-350 is the biggest of the lot when it comes to Ford pickups. But like the F-150, they have had their issues over the years, and the 2006 model is one of the worst. Wiring issues really let this truck down, leading to all manner of electrical issues, and the transmission didn’t exactly hold up well either.

Related: 15 Pickup Trucks From The ’90s That’ll Increase In Value In 10 Years

What was wrong with the Ford Courier? Quite a lot, as it would appear. The courier was an import pickup from Japan, but it had one fundamental flaw. Other than being plain ugly, It could not pull a damn thing. And if you had that bed loaded with anything remotely heavy then you simply weren’t going anywhere.

2005 saw Ford facing increased competition from its main rival, Chevrolet. The Silverado was getting into its stride, so Ford needed to go big or go home. Now, the 2005 model was strong, it was quiet, and its 5.4-liter V8 was a stunner. But it had a horrible fuel economy of around 16 mpg and its acceleration was atrocious.

The name Sport Trac does make you think that this is a sporty edition of a truck. The reality is very different indeed, as the Explorer Sport Trac is nothing like a sports truck. The battery on this would run flat very, very fast and that smaller bed meant it lost out massively compared to the Dodge Dakota and Toyota Tacoma.

The 2002 Ford F-250 is another rare blip in Ford’s line of trucks. The F-250 is sandwiched nicely in-between the F-150 and F-350 and the 2002 model had a number of issues. Engine issues are the biggest problem. This has included shot out spark plugs, outright engine blowouts, and various cooling issues, many being reported to the NHTSA.

It’s difficult to really work out if the Bronco is a truck or not. Because looking at it, you’re never really quite sure. A new edition is coming in 2022 after the original died in 1996. But given that this could never pull much, it’s the bed was too small and it was basically just an SUV pretending to be a truck, why is it coming back?

The 2005 F-250 looked good, there was a lot of range on offer, and it was sturdy. But it did have its issues. Its diesel engine was very noisy, you couldn’t tune the radio, and the interior was a bit …cheap, shall we say. Definitely not the best truck on offer back then.

The Ranchero is becoming a highly collectible classic. But upon its launch, it was difficult to find anyone excited about it. Put simply, the concept didn’t work. It could never carry enough and to classify it as a truck is almost an insult. As a classic though, it’s an absolutely awesome thing to own.

5 Blew Everyone Away: Ford F-2

What makes the Ford F-2 from the 1940s and 1950s so special is that many regard it as the beginning of the Ford trucks that we know and love today. It was the first ¾-ton pickup produced by the company and nowadays, they are massively sought after as a vintage car/truck and finding one in good condition is hard.

4 Blew Everyone Away: 1993 Ford Lightning XLT

The Ford Lightning XLT was a bit of a mad beast. It first appeared on the scene in 1993 and its 240-hp 5.8-liter engine made a great sound and provided plenty of intimidating power. It’s four-speed automatic transmission was tough, as the truck was designed for performance enthusiasts. It could literally take anything you threw at it.

The 1998 Ford F-150 NASCAR was a great car simply because it was a unique, one-off edition of the 1998 F-150. And that it was partnered up with NASCAR. 200+ hp were extracted from a larger Triton V8 engine, setting it apart from basically any truck at the time. It’s a rarity, so you might struggle to find one now.

Whilst some of its trucks in the 2000s did appear to fall by the wayside, the 2001 F-150 really did not suffer that same fate. Four-wheel antilock brakes were a big hit on the 2001 model, with four-doors also being added on the crew-cab model. Plus, it was rugged and tough. It could take quite a beating.

The Ford F-150 Raptor has been one of the most anticipated trucks of recent times. Perfect for finding that balance between off-roading and performance, it has a huge 450-hp twin-turbo V6 at 3.5 liters. A 0-60 of 5 seconds puts this massive truck into sportscar territory, and there’s virtually nothing that can stop this thing off-road.