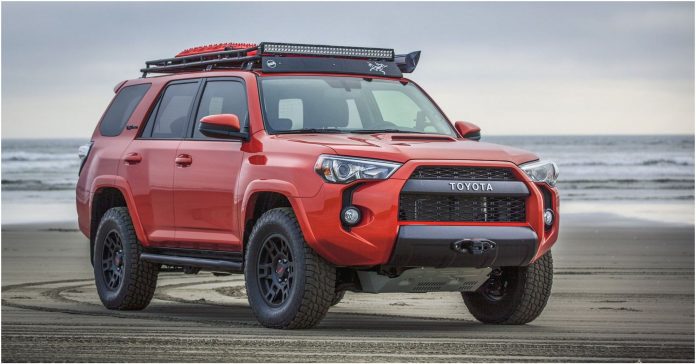 Let’s face it: if you’re looking for a car that is both extremely practical and can really take a beating off-road, you can either go for an SUV or a pickup truck. Both of these large vehicles boast plenty of power, utility, and ground clearance to be up to just about any task, so the only question that remains is which ones are tough.

In the world of trucks and SUVs, being tough doesn’t just mean being able to take a hit and continue running, it also means being able to perform tasks no other car can perform and remain reliable, comfortable, and in working order for years to come.

In this article, we’re answering exactly that question, by listing some of the toughest SUVs on the road (and off it) and comparing them to the most badass pickup trucks affordable to consumers.

The Ford Explorer wasn’t always a great car. In fact, it earned itself a reputation of sorts for breaking down at an alarming rate. But over time, the Explorer has become a very reliable and sturdy machine. An optional V6 turbo provides great power, the cabin is very quiet, and comfortable and there is plenty of space for luggage in the back.

The Subaru Outback is an SUV that has the claim of being one of the few cars that Jeremy Clarkson, Richard Hammond, and James May all collectively love. And for good reason, too. All-wheel-drive, and a solid 2.5 or 3.6-liter V6 engine provide good options. Plus, like a lot of Subaru’s, it’s tough as nails. Autowise has called it “simply indestructible.”

Related: These Are The Toughest Pickup Trucks On The Road

Rust has always been a bugbear for the Wrangler, no matter what the company does. But that aside, it’s always been, and still is, the most capable 4×4 SUV in the market for off-roading. The new models stick to the proven recipe and add a 2.0L engine producing 270 horsepower into the mix at an affordable starting MSRP of just under $30,000!

Mazda is probably more famous for its small sports cars, such as the MX-5 and the RX-7. But the CX-9 is a pretty damn good SUV. It has some of the sharpest stylings of any SUV on the market. It isn’t quite as strong as the explorer, and luggage space is not quite as plentiful. But it offers some of the most durable options for the price, along with proven Japanese reliability.

Ford does have a habit of making a solid, strong SUV don’t they? 3% of every Expedition made have eclipsed the 200,000-mile barrier and that is quite an achievement for any car. It’s a truck-based SUV, so it is extra tough over quite a few SUVs, according to Motor Biscuit. Take care of them and they will last you decades.

Toyota is perhaps one of the best car manufacturers out there. They certainly know how to make a solid car and the 4Runner is no exception. This is one of the cars that helped solidify Toyota’s reputation for producing cars with bulletproof reliability. One of the most capable SUV’s ever made and certainly one of Toyota’s best.

Related: 15 Expensive Trucks and SUVs That Depreciate Like Crazy

Mercedes are perhaps not that well known for making big SUVs. They are more well known for luxury sedans and some of the best performance cars on the planet. But the G-Class is a monster SUV. It’s one of the toughest cars the brand has ever made, perhaps the strongest ever according to AutoWise.

Land Rovers have had their issues, but the newer models are trying hard to rectify them. The Discovery is one of the sturdiest new SUVs on the market. The Land Rover Defender is perhaps the ultimate, but the Discovery can take a beating as well. Modern versions don’t quite have the same off-road capabilities of earlier versions, but they are every bit as durable.

What on earth is a Lada doing on this list, I hear you cry! I’m sure readers of AutoWise felt the same way too. Well despite its slightly odd, boxy looks this is no stereotypical early Lada that you find in memes of bad cars. This new version of the Niva, a long-standing name, is inexpensive and plenty tough enough for what you will need. And it can reach some crazy limits so, in some ways, it’s a shame they aren’t obtainable so easily!

The Volvo XC90 has been a part of the Volvo range for many, many years, and 2014 saw it finally shift up to its second generation. Surely, it’s one of the most handsome SUVs out there, and one of the safest, as Volvo are the kings of safety. It has won Motor Trend’s SUV of the Year award back in 2014, and those 2-liter engines that it comes with are superb.

GMC doesn’t often get much recognition for the trucks that they produce. Which is a shame, because the company’s Sierra trucks are some of the best out there. And the 2020 3500HD with it’s 35,500 IB towing capacity is something else. A staggering 59% more than the 2019 model! This truck is something else.

According to isecars.com, the Ford F-250 Super Duty is one of the longest-lasting vehicles ever made. And that’s backed up by Edmunds who says it has “great efficiency” as well. The F-250 is one of the most popular trucks in the F Series range, and they are incredibly tough. Not a lot comes close.

As we have seen earlier, Toyota knows how to make a strong and dependable truck. And the Tundra is no exception. One of the best for performance and durability, 381 hp coming from its V6 certainly makes it no slouch! From its launch in 2000, the Tundra has always sold well and is popular with enthusiasts too.

We haven’t talked about Nissan yet, but they know how to make a good pickup truck as well. A 4.6 liter V6 with 261 hp means the Frontier is not lacking in power, and great fuel efficiency makes it somewhat economic, too. If you want your truck to be more compact yet retain the same rigidity and build quality of some of the bigger trucks on this list, look into this one.

The Honda Ridgeline has not always had a good time of things. But over the years it has gotten better and better, and the 2017 edition was perhaps one of the best that the company has ever made. 280 hp from its V6 and great smoothness and stability, according to US News, make it a great truck to drive around every day.

Next: The Porsche 911’s Evolution Over The Years


Next
15 Slammed Trucks That Look Much Better Than Expected

Covering anything from JDM cars to WWII machines. Contributed to HotCars since the Autumn of 2018.