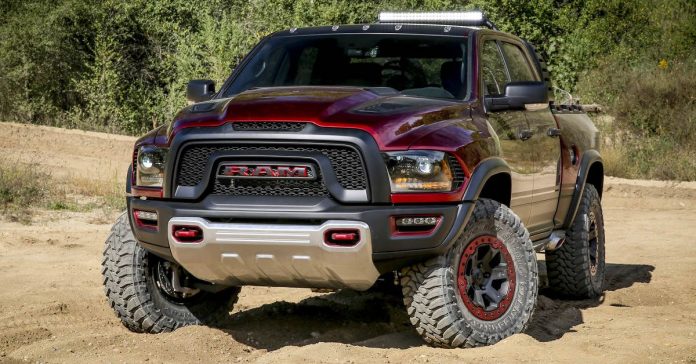 The Ram TRX is a new truck which is due for launch later in 2020, and which is already being eagerly awaited by pickup devotees. Short for Tyrannosaurus Rex, the TRX is designed to compete with the rough and ready Ford F-150 Raptor.

Not all the details about the new truck have been revealed, but we do know that it is going to be powered by the same V8 engine that is usually found in the Dodge Challenger Hellcat and that if you want to buy one, you should expect to pay at least $55,000.

Related: Here’s Why We’re Excited About The New Ram TRX

Not everyone is waiting with bated breath for the launch of the new Ram TRX, however, and there are plenty of pickups that may be a better option, depending on what the truck is going to be used for.

First and foremost, an anticipated starting price of $55,000 is expensive for a pickup and is going to be beyond the financial means of a lot of people in the market for a new truck. The Mitsubishi L200 is a solid pickup and is much better value for money for the equivalent of just $26,000.

The 6.2-liter V8 Hellcat engine that is destined for the Ram TRX is going to make it one of the most powerful pickups on the market, but the Nissan Titan isn’t far behind. In 2020, the Titan’s engine was upgraded to a 5.6-liter V8 which provides 500 bhp.

This may not be quite as impressive as the Ram TRX’s projected numbers but given that a new Nissan Titan will only set you back $36,000, you get a lot more bang for your buck with the cheaper model.

The Ford F-Series, which has been on the go since 1948, is the best-selling pickup truck in the world and has even been the best-selling vehicle overall in the States each year since 1986. It is difficult to compete with that level of success, and yet that is what Ram is trying to do with their new TRX truck.

The Ford F-150 remains the ultimate workhorse truck, with ample towing and storage capacity. This is the pickup you buy if you need a vehicle for work and not play.

Little is known about the long-term prospects of the Ram TRX, but some other Ram pickups haven’t fared so well when it comes to reliability surveys. If you’re looking for a reliable truck, a much better option would be the 2020 Toyota Tacoma which has an above-average reliability rating.

Despite being designated a compact truck, the Tacoma has ample room in the cab, and best of all it only costs $26,000. The Tacoma was the first pickup made by the Japanese manufacturer in US-based factories, and the vehicle has been built in the States since 1995.

The Jeep Gladiator is another new arrival on the truck market and it has a unique selling point compared to its rivals; it is a convertible pickup. Based on the design of the popular Jeep Wrangler SUV, the Gladiator made its first appearance as a concept car at the 2018 Los Angeles Auto Show, before going on sale to the public in 2019.

The Jeep Gladiator is either available with a fully-retractable soft-top or with aluminum roof panels that can be removed, along with the doors.

Once upon a time, pickup trucks were only ever used by business owners to do their heavy lifting work. These days, they are just as likely to be used on the morning commute, the school run or to go exploring off-road on a weekend.

All this means that it is increasingly important that pickups are comfortable for driver and passengers, and one of the trucks which scores highest for comfort is the Chevy Colorado, a mid-size truck which was first sold in the US between 2003 and 2012 before being relaunched in 2014.

The Ram TRX might have designed to compete with the Ford F-150 Raptor, but the F-Series is not the only pickup that is available as a high-performance Raptor model. The smaller Ford Ranger truck is also available as a Raptor – though only in the UK.

Lucky UK drivers get to experience the thrill of driving a real 4×4 pickup off-road, without having to deal with the larger Ford F-Series when driving in the city. It is surely only a matter of time before a sporty and speedy pickup like the Ford Ranger Raptor is available in its spiritual homeland, however.

There are lots of practical aspects to take into consideration when deciding which is the right pickup for your needs. If you are planning on carrying a lot of cargo, then you don’t just need strength, but you also need space – and the right kind of space.

One of the newest innovations in truck design is to introduce configuration options for the pickup bed to ensure that whatever you are carrying can be safely held in place. The Nissan Frontier comes with just such a bed features as standard, making it an ideal choice if you are planning on transporting large or unwieldy items.

The Ram TRX is not the only new pickup that the company has in the works. The US manufacturer is also working on relaunching the Ram Dakota, also known as the Dodge Dakota, which was previously available between 1987 and 2011.

The popular pickup has been given a complete redesign and is due to be relaunched the as Ram mid-size pickup option for 2021. If the sound of the fearsome Ram TRX is a little intimidating, then the new and improved Ram Dakota might be more your style.

With a starting price of over $50,000, anyone splashing out on the new Ram TRX is going to expect not just high-performance engineering but also a comfortable and luxurious interior. While Ram has promised their new pickup will have all mod-cons, it is unlikely to be able to match up to one of the most luxurious trucks ever sold – the Mercedes X-Class.

In fact, the luxury of the X-Class proved to be its downfall, as few pickup drivers were willing to pay big bucks the truck. You can still pick up second-hand models if you want to feel like royalty while you work.

Next: The Real Story Behind The Dodge Ram Engines


Next
We Wish These Supercars From The ’90s Were Still Here

Congestion remains after truck catches fire in three-vehicle accident on 210...