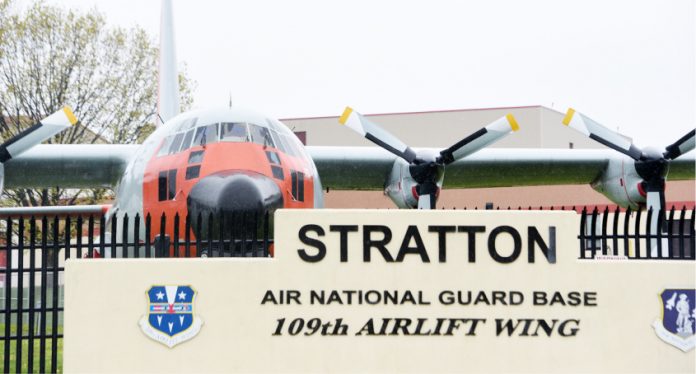 In what would normally take place during a five-month span, the National Guard’s 109th Airlift Wing will commence resupply missions to Greenland on Tuesday, fitting 25 flights into just three weeks of air time.

Three LC-130 Skibirds, manned by 20 aircrew members and 40 maintenance Airmen, will depart the Stratton Air National Guard Base in Scotia and deliver 40,000 gallons of fuel and 30,000 pounds of food to Summit Station. The station is operated by CH2MHill Polar Services for the National Science Foundation’s (NSF) Arctic Research Program. The National Guard usually sends a crew to Greenland to prepare for the program. But this year, pilots aren’t traveling to Greenland for training, but rather to solely supply the climate-research scientists stationed there with goods.

“The 109th has been going up to Greenland for quite a while, even before they had the Antarctic Mission,” said Capt. Joseph Shanahan of Corinth.

“[For this three-week span] it was just crunching the numbers and figuring out how many missions had to be done. We’re really going up there to resupply Summit Station so that they will have enough gas, fuel and other supplies to last the winter because once we leave after these three weeks there, the crew that is staying at Summit — the scientists that are staying at summit — they’re not going to see anybody until maybe March.”

Shanahan will be flying for a week during the missions, for roughly four or five flights. He said that, during a normal year, pilots bring fuel, construction materials, science gear and whatever else those at Summit Station may need during the five-month span. Given the pandemic and that training in Greenland for the Arctic Research Program isn’t happening, pilots are just delivering the essentials for the coming months.

The Skibirds will be loaded with a tank of excess fuel to drop off in Greenland and will be filled with food supplies, so that pilots can deliver everything the scientists need in a shorter period of time.

“It’s like we’ve been forced into this whole thing with COVID and all the restrictions put on travel,” Shanahan said. “Normally, we would want to be up there throughout the spring and summer between that April and September time frame. So I don’t see this being the new norm where we’re only going to go up for three weeks to resupply just the station.”

The missions will include precautions — which the 109th coordinated with the Danish government — to minimize the risk of transmitting COVID: quarantining before the trip and COVID testing prior to departure and while in country. And Shanahan’s biggest hope, at least right now, is that the pilots can stick to the three-week frame.

“I hope there’s good enough weather,” Shanahan said. “If we have to, we could end up staying an extra week. But as long as the weather is good, I think we’ll be able to get up there and get them refueled.”