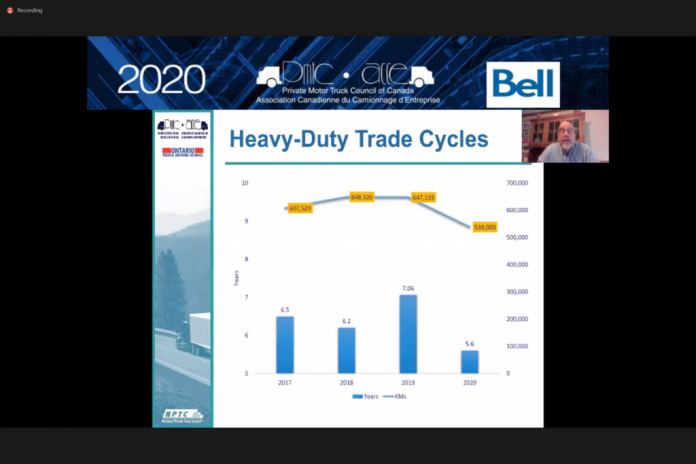 TORONTO, Ont. – Canada’s private fleets have offered a window into their operations through the Private Motor Truck Council of Canada’s (PMTC) 2020 benchmarking survey. Here are 11 things that emerged through the latest results.

2. Buying vs. leasing — “Forty percent of you all prefer leasing as a strategy, about 20% of fleets prefer ownership as a strategy, and 40% prefer a combination,” Moore added. “In the States, we’re seeing a movement more toward leasing – even on the trailer side of the fence.”

3. Diesel dominating, fuel economy improving – There are plenty of powertrain options on the market today, particularly when it comes to lighter equipment in urban service. But essentially all of those who responded to the survey used diesel equipment. The medium-duty fleets averaged 8.2 mpg (28.6847 L/100 km), and heavy-duty units averaged 6.7 mpg (35.1067 L/100 km).

4. Maintenance heading outside – Seventy-nine percent of the Canadian private fleets outsourced their maintenance, compared to 49% of their U.S. counterparts. Emissions systems were identified as the top maintenance challenge, followed by electrical work, cooling systems, brakes, and lighting.

5. Improved safety and cost savings connected – “If it ain’t safe, it ain’t efficient,” Moore said, noting that half of the surveyed fleets saw improved safety measures as their leading cost-saving strategy. One-third of respondents listed the use of on-board technologies or better fuel economy among the top cost-saving initiatives.

6. Wages down – The average wages reported by the Canadian private fleets were surprisingly down compared to previous years, but Moore said that likely had to do with a cross section of participants that included more medium-duty operations. The average starting wage was $58,400, rising to $63,400 by the third year on the job. Maximum wages were around $72,500. Mileage rates averaged around 41 cents per mile, while hourly wages were at an average of $22.16.

7. Aging truck drivers – The average truck driver working for a surveyed private fleet is 50.6 years old. Moore admits to be surprised by the “elevated” age, especially given a rising number of retirements in the sector. But he also stressed that the older drivers will need to be treated differently than their younger counterparts because of factors such as safety profiles and workers compensation needs.

8. Recruiters largely competing with other fleets– More than half (56%) of the drivers who left the surveyed fleets went to work at another driving job, while 34% retired. Fleets could do a better job of identifying job-hopping drivers earlier in the hiring process, Moore suggested. “The more you do at the very beginning of the hiring process may eliminate some of the problems.”

9. Offering generous benefits — Canada’s private fleets also tend to be generous when it comes to employee benefits, with virtually all of them offering medical and dental care, bereavement leave, vision care, life insurance, and long-term disability coverage. Another 92% offered wellness programs. “We need to do a better job of communicating that value to our drivers,” Moore said.

10. Don’t worry about the backhauls — A mere 8% of the surveyed Canadian fleets solicit backhaul freight. “It costs an awful lot of time, energy, and financial resources to attack those empty freight miles, and it’s better to get that outbound freight out,” Moore said. “They’re not trying to be all things to all people.”

11. On-board tech is popular – About ¾ of the surveyed fleets have adopted on-board technologies in their trucks. They’re all tracking idle time, sudden stops, and speeding. Meanwhile, 89% used e-logs and geofencing, while 67% of those with such systems used onboard technology to boost fuel economy.

This was the fourth year of the survey.