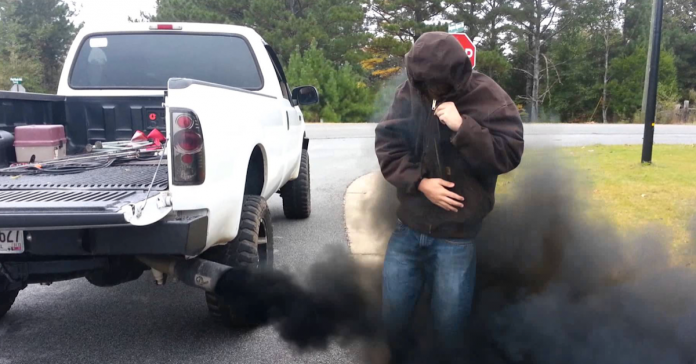 Every year, the roads see more and more pickup drivers. That’s a great sign for pickup manufacturers, but some people aren’t thrilled about that since they have had negative experiences with pickups. While most pickup drivers behave well on the road, there are some that take pickup ownership a bit too far. They do all kinds of things on the road that annoy people. That doesn’t happen only with pickups; it happens with all vehicle types.

Since pickups have gained a lot of attention over the years, we decided to share photos of pickup drivers misbehaving on the road and in parking lots.

Most pickup trucks are bigger than regular vehicles, so they require more space for parking. That’s one of the disadvantages of having a big vehicle. The driver has to look for a parking lot that can take his or her vehicle.

In some cases, that’s not always possible, so some drivers take up two bays when they need to park. On the one hand, people can complain about it, but the driver can argue that he needs extra space because his or her vehicle is bigger.

Getting splashed has happened to numerous people. Sometimes, it happens accidentally and the driver feels sorry for what they’ve done. The worst part is when a driver is deliberately gunning for you and wants you to get wet.

When this pickup driver splashed a pedestrian, he turned to see what was going on. That pedestrian definitely got more than be bargained for when stepping out for the day.

It’s one thing to practice rolling coal when you’re alone somewhere where you can’t bother anyone, but it’s a completely different thing when you put the health of others at risk.

There’s no doubt that rolling coal pollutes the environment much more than a regular car. Some states have instated fines for pickup drivers who engage in the practice. Here is a person who experienced the wrath of rolling coal.

When you see a driver talking on the phone, it’s annoying because it poses a risk to other people on the road. Drivers who are on the phone while driving aren’t fully focused on the road.

Simply Insurance reported that 1 out of 4 car accidents in the United States is due to driving and texting. As with this example, a pickup driver was on the phone and had a motorbike riding next to him. Sure, the biker shouldn’t be so close to the pickup, but the driver would be more cognizant of the situation if he wasn’t on the phone.

Almost everybody who has owned a car has pretty much done this. When you park, make sure that there’s nobody coming up from behind you before you open the door. Once you’ve seen that the coast is clear, make sure you close your door as soon as possible so that people who are going to come past you don’t get knocked over because your door is obstructing them.

RELATED: 15 Tips And Tricks For Finding Your Perfect Pickup Truck

There’s a reason that pickup manufacturers stipulate the maximum load a model can take. It’s not only that it helps drivers determine the weight that a pickup can take so that the vehicle isn’t overburdened, but it’s also so that there are no problems on the road. When you overload a pickup, an accident such as in the case above can happen, resulting in road closures.

This is a slightly different case than the one above. This driver wanted to get into the parking bay the easiest way possible, so he swerved off the road and parked at an awkward angle. The rear is sticking out, which could pose a problem to drivers passing by, but it also makes it difficult for the driver behind to get out.

Overloading your pickup not only affects the driver, but it can also affect other road users. In this case, it can also endanger the lives of those who are on the overloaded pickup. Not only does this pickup have too much cargo, but it’s got too many people as well. In all fairness, nobody forced those people on there, but this poses a problem for other road users

Some pickup drivers are adamant about having extra lighting. Not only do they make the standard lights brighter, but they also insist on fitting light bars, as well as additional lights. That might provide great visibility to them at night, but it can be extremely annoying to other road users.

It doesn’t look as if anything strange is going on here if you look at the photo. The backstory reveals that the driver of the pickup tried to make a getaway. When the tow truck attempted to tow the pickup away, the driver jumped into his car and tried to drive off.

2 In The Name Of Convenience

Regardless of what car you drive, you have to be considerate on the road. It’s not always about what’s convenient for you. Sure, there are times when you have to jump out of your car in an emergency, but those should be exceptions. By parking so close to the building and leaving the door open, the driver prevents pedestrians from strolling past and residents from entering or exiting.

We spoke about most pickup drivers needing more space than other drivers when searching for parking, but this is different. The other pickup shows that each bay provides plenty of space, so there’s no need to park horizontally and occupy three parking bays. We’re just glad that someone taught the horizontal parker a lesson.

NEXT: 12 Photos Show How Jeep Pickup Trucks Have Changed Over The Years


Next
The 15 Most Disappointing Italian Supercars Ever Produced

Risky Business: Not doing your homework on trade-in values can cost...