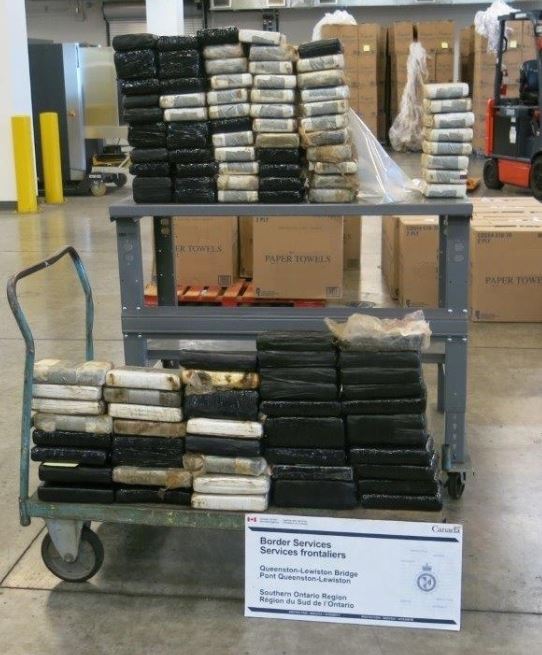 NIAGARA-ON-THE-LAKE, Ont. – Authorities have seized 136 kilograms of suspected cocaine worth $17 million from trucks in two incidents at border crossings in Southern Ontario.

The drug busts were announced by the Canada Border Services Agency (CBSA) and the Royal Canadian Mounted Police (RCMP) on Thursday.

The latest incident happened Aug. 18 when a man hauling a tractor trailer arrived at the Queenston-Lewiston Bridge, and was referred for a secondary examination after officers observed some anomalies in the packaging of the shipment, the CBSA said.

“Further examination led to the discovery of 104 packages of suspected cocaine concealed within the commercial load.”

The CBSA seized 117 kg of cocaine, valued at $14 million. The agency said it was one of the largest land border cocaine seizures in the region.

The driver was arrested and turned over to the RCMP Hamilton Niagara Detachment.

The agencies said the previous incident happened in April. It was not clear why that seizure was not reported until now.

The CBSA said on April 15 a male truck driver arrived at the Blue Water Bridge, and was referred for a secondary examination.

The driver was arrested and turned over to the RCMP London Detachment.

From January 2019 to August 2020, about 600 kg of suspected cocaine was seized by the CBSA at ports of entry in Southern Ontario, the agency said.

Migrants try to walk, cycle, travel in trucks to get home

Diesel and oil will be around for awhile yet: Energy analyst...