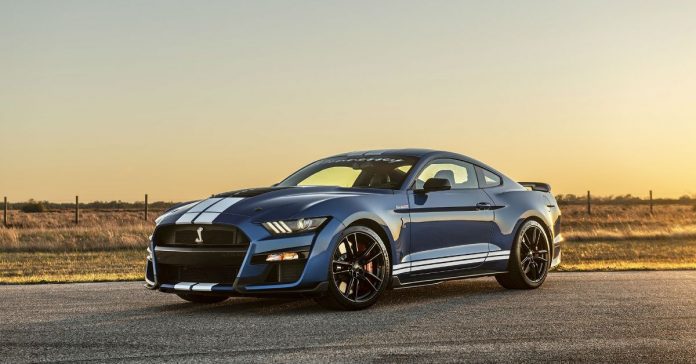 In the era of automakers trying to create greener vehicles with electric motors, Ford decided to deliver the most powerful and quickest Mustang: The Shelby GT500. Ford’s partnership with Carroll Shelby is the stuff of legends, a story that focuses on Shelby’s role within Ford: racing. Racing against Ferrari, to be specific. The GT500 played a very important role in Shelby’s history as a builder of performance automobiles.

Even though the GT500 is the most powerful street-legal, factory-built Mustang ever released by Ford, the 2020 Hennessey GT500 Venom 1000 blows it out of the water. The tuned version has a twin-turbocharged V8 that delivers 1,000 hp at 7,000 rpm. To add context, the standard GT offers 760 hp.

13 It’s Capable Of Much More Than Any Production Mustang

Following months of hard work, the tuned engine is capable of much more. Torque has been significantly increased (a total of 850 lb. ft. of torque at 4,800 rpm). This is much more than the official figure announced by Ford, which is 625 lb. ft. of torque in combination with the dual-clutch gearbox.

We’d imagine that in order to deliver 1,000 hp Hennessey would have to change the entire motor but it is robust enough to handle all that extra power. The engineers added a Twin Turbo system with new intercoolers, new fuel system, custom piping throughout and a stainless steel exhaust system.

The 2020 Ford Shelby Mustang GT500 hasn’t even been launched to the automotive world, and Hennessey is talking about upgrade packages. This Texas-based tuning company has confirmed three optional packages for the new car, just in case the standard 750 bhp doesn’t deliver to your expectations. All three packs have similar mods.

According to Hennessey, “the eight’s maximum torque output at 1,000 pound-feet when the tachometer indicates 4,800 rpm. Achieving those figures was easier said than done.” The V8 spins the rear wheels via a seven-speed, dual-clutch automatic transmission that has also been strengthened.” The significant power bump should make the car the force to reckon.

The visual upgrades are limited to embroidered headrests, unique emblems and badges, and numbered plaques signed by Hennessey engineers on the dashboard. It keeps the standard carbon fiber wheels. The base GT500 isn’t low-key at all, but the 2020 Hennessey GT500 Venom 1000 is in a segment of its own.

Together with Ford, Hennessey added small touches to set the GT500 Venom 1000 apart from the rest of the lineup. The signature Shelby snake sits on the center section of the steering wheel. There are many feel-good touches, such as Alcantara on the steering wheel, black toggle switches and a carbon fiber instrument panel.

RELATED: An Inside Look At Hennessey’s Ford Mustang Performance Packages

The 2020 Hennessey GT500 Venom 1000 is fitted with the class-exclusive, 12-inch LCD cluster with multiple personalization options, including 3 views: Normal, Track and Sport. With the MyColor feature, you can match the gauge hues to your mood. With drive modes (Normal, Snow/Wet, Sport, Track or Drag Strip), you take charge of vehicle dynamics.

Inside the cabin of the GT500 Venom 100, you will see a gear selector dial that’s similar to what the company has placed on the Edge and Fusion. It may require some time getting used to, but this was a necessary change in order to use the new dual-clutch transmission.

RELATED: 15 Cars Hennessey Performance Has Made Even Better

This tuned Mustang is surprisingly livable for how focused it is on track performance. Hennessey didn’t change the original magnetorheological dampers that keep the car under control and take shock out of impacts. Optional Recaro seats (a part of the Track pack or a stand-alone option) hug you tight at all times.

Every GT500 Venom 1000 comes with an 8.0-inch touchscreen with the Ford’s Sync 3 infotainment system. Ford’s unique navigation and a premium 12-speaker Bang & Olufsen sound system are a part of the $3,000 Technology package. Every model can be locked and unlocked from the phone app and serve as a WiFi hotspot.

Despite the high price, Hennessey GT500 Venom 1000 buyers have to drive without adaptive cruise control, automated emergency braking, automatic high-beams and other safety features offered on lesser Mustangs. A backup camera comes as standard because it’s required by law, while blind-spot monitoring is a part of the Technology package.

1 It Corners With Confidence

The 2020 Hennessey GT500 Venom 1000 isn’t all about performance. Even though it’s heavy with a carb weight of about 4,200 pounds, the car turns easily and corners with confidence. Huge Brembo brakes hold up just fine to truck abuse, without evidence of fade. Cup 2 tires turn the car into a hunting machine.


Next
15 Gorgeous Cars We Can Actually Afford