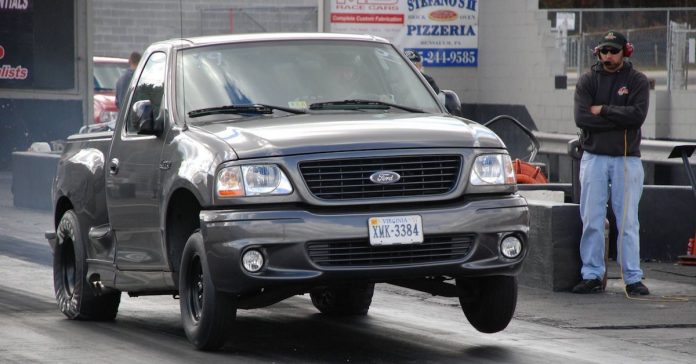 What can’t pickups do? When hauling cargo and off-roading isn’t enough, these pickups prove that high performance is possible too.

Pickups have always been known to haul cargo and for their offroading capabilities, maybe because the majority of people who owned them only used them for carrying cargo or towing other vehicles. Well, we can proudly say that this is no longer the case with pickups because the average American truck is no longer content with just having its towing strength; in addition, it tries to break into the speed game.

Being able to attain a massive top speed above 100 MPH and attain an acceleration of less than 6 seconds isn’t an easy affair considering that most of these trucks are really heavy and aren’t made of the same lightweight metal other cars enjoy, so when we see a pickup that breaks these limitations and offers the high performance that we’ve come to love so much, we give it all the necessary respect that it deserves.

So take a look at America’s fastest pickup trucks here. You’ll get to see a pickup that beat almost every sports car out there and a lot that remain in a contest with them. If you’re ready then let’s go.

Obviously, this is not one of the best performing pickup trucks in the market, but its V6 engine can summon a respectable 308 HP and 275 LB-FT of torque as well as reach a top speed of a meager 99 MPH while it crawls up to 60 MPH in 6.3 seconds.

RELATED: Here’s Everything We Know About The 2022 GMC Jimmy

The Silverado has been a long time favorite of pickup lovers. This vehicle is totally reliable and can haul cargo like the pro that it is. The 2019 Silverado can equally run-up to a top speed of 130 MPH and with its powerful V8 engine, this pickup makes 60 MPH in 6.0 seconds.

Yes, Ford is at it again. The F-150 is a pickup that has gathered so much love that it’ll be a mistake for Ford to let it go. This 2017 Raptor is another capable pickup that takes you across the finish line with 140 MPH and yet delivers a worthy acceleration to 60 MPH of 5.5 seconds.

With all the impressive upgrades that came to this 2015 Ram pickup, we fancied its clean style and how it was so eager to run at its top speed of 155 MPH while taking us up to 60 MPH in 5.4 seconds. We think this pickup was a great production piece from Ram.

Everyone knows that Ford’s 2017 F-150 didn’t have a lot of changes happening on the outside but on the inside, specifically under the hood. Yep, that’s where you’ll find all the changes you need because this pickup comes with four amazing engines. And to be specific, the EcoBoost engine is a proud one that offers 375 HP and 470 LB-FT of torque, which results in a sweet 60 MPH time of 5.3 seconds.

The 2003 Ford F-150 Lightning may not have a beautiful exterior that most people today would find attractive, but it’s definitely fast. This truck boasts a supercharged V8 engine that sprouts 380 HP and then goes ahead to bear an astonishing speed of 146 MPH and 60 MPH in 5.2 Seconds.

Ford’s Raptor SuperCrew makes 60 MPH in 5.1 seconds and also has a maximum speed of 107 MPH. Not exactly impressive, but this high-performing truck is a staple of American pickups and comes with a capable V6 engine that gives 450 HP and 510 LB-FT of torque coupled with a top speed of 107 MPH.

Hennessey once again has unveiled a pickup that stands out from the crowd. This lovely modified F-150 comes with a powerful engine V8 engine that’s supercharged and delivers a top speed of 186 MPH, and an unimpressive rise to 60 MPH that takes 4.9 seconds. This vehicle may not accelerate very fast, but it has a speed to match.

V10 engines are terribly fast and capable, and true to the fact that this was a muscle truck from the bosom of mother Dodge herself, it came with a sweet 150 MPH top speed, a really impressive feat for a pickup and could do 60 MPH in 4.9 seconds, faster than some SUVs in the market.

Never expect anything less than a sweet performance from a supercharged 2009 Toyota Tundra. This hunk of a pickup’s supercharger can push its V8 engine to new territories with 504 HP and 550 LB-FT of torque, making for an impressive set of muscles in a truck. For its performance, we’ve dubbed it the Toyota Thunder.

Hennessey Performance Engineering decided to touch up this pickup with their speed tuning hands. The result was a performance pickup whose turbocharged engine roared with 800 HP and 850 LB-FT., generating enough speed to take the pickup across 60 MPH in 4.4 seconds. We admire Hennessey’s love for vehicles with massive engine power.

RELATED: 7 Reasons To Buy A Dodge Charger This Year (And 5 Reasons To Wait)

The 1991 GMC Syclone was only produced in 1991 and it’s a cool performance truck that’d been tried and trusted for many years now, its performance had always been stellar and above average and we weren’t surprised when it was taken for a spin and brought up to 60 MPH in 4.3 seconds. It might interest you to know that the Syclone was only 2,995 units were built in 1991 and they were all black.

Chevy’s Silverado is a really capable truck, but Hennessey pushes the boundaries by installing really strong engines that would do perfectly well both in a drag race and a full-blown motor race by generating a whopping 805 HP and 812 LB-FT of torque as well as hit 60 MPH in a remarkable 3.9 seconds.

This one deserves a special placement here because it’s the only EV bold enough to stand amongst other high performing trucks. This sleek futuristic dream pickup can tow 14,000 pounds and would be able to travel 130 MPH and accelerate as fast as 4.5 seconds. We look forward to this wonder-pickup that’ll definitely change the pickup game.

Trust us, you may never see a truck, modified or not, that runs like this modified ’99 Chevy S-10. It almost reminds us of hypercars and their desperate trials to break the 1.0-second acceleration block. This remarkable Chevy, although wickedly upgraded, can muster 60 MPH in 1.1 seconds. It screams and roars like a tornado. Try not to cross this one’s path.

NEXT: 15 Things To Consider Before Buying A Chevrolet Sports Car


Next
All The Cars Snoop Dogg Owns (And Used To Own)

Taking A Look At The Proud Chevy Truck Tradition: Video