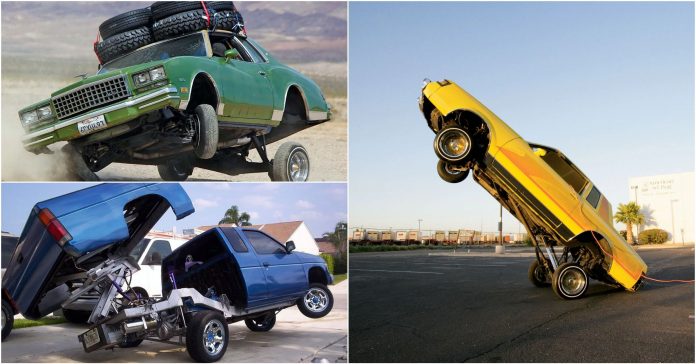 The word “hydraulics” may bring about visions of flowing water, but when it comes to vehicles, it means things that are way, way different. Car culture and modifications can be pretty zany and niche when it comes to hydraulics. You can take your car, truck, or any four-wheeled vehicle, add in hydraulics and turn into a certified lowrider. Hydraulics can turn your four-wheeler into something that can run on three wheels or jump up and down like an excited schoolgirl on two wheels, just for the fun of it.

Of course, when you win some, you got to lose some as well, and modifying your car with hydraulics means you have to make do with a decent amount of money spent. Also, once you turn a car into a low rider, speed isn’t your friend anymore. If you still think donking out your ride is cool and hydraulics make you badass, here go 15 completely out-there pictures of cars and trucks going crazy on hydraulics.

If the picture looks a little too sci-fi movie-like, well, its because the concept is a way out, or should we say, way up. It’s a Jeep on stilts, designed by special effects guy Scott Beverly as a promotional stunt for Verizon’s Hum platform. The idea is simple: when facing traffic, let your Jeep Grand Cherokee ride over it all.

14 Let Trucks Have Fun, Too

So this hydraulic-pumped pickup truck has been done by CCE Hydraulics, who use it as a promo vehicle to show off their hydraulic prowess. Why else would they make a truck prance the way a young horse does?

13 The Monster Carlo From Roadkill

While it’s mostly big-sized sedans from the ’50s or ’60s that are turned into lowriders, this one here is a Chevy Monte Carlo from the ‘80s replete with a full set of hydraulics and loads of tires on the roof – riding roughly in the desert as it hops and rides and lets loose on tarmac best left to proper offroaders.

12 Forget The Wheels, Let’s Do The Bed

…Or so thought the owner of this golden-hued pickup. Why use the tailgate when you can just tip the contents out in style? Not that lowriders can haul anything with any kind of speed. With hydraulics, these are pickup trucks are “pickups”, only in name.

When it comes to this pickup, the owner didn’t just add fancy hydraulics to the wheels but also added a rather creative set to the pickup truck bed. While the truck’s wheels do their bit, the pickup truck bed also adds its geometry to the whole chaos on a vehicle that can still run on the road despite all that dancing and stancing.

So this is what happens to an Impala Station Wagon once it has sniffed hydraulics. Other than the white roof, the whole of the interiors and exteriors run in a space-age blue, and all of its fleet-footedness has been siphoned off to its hydraulics thus making it an Impala in name only. Most would be able to run faster than this car.

The bottom of a car isn’t supposed to be seen by anyone other than its makers, roadkill and mechanics. This is why this particular shot of a bottoms-up lowrider prancing about in a parade makes us cringe. We don’t want to see the insides, or rather the bottom of any car, so there’s no need for a car to raise its posterior like that. Is there?

To someone who has not encountered hydraulics before, a car like this may look broken and in urgent need of a chiropractor, if vehicles had one. Despite the front wheels looking in severe distress, the hydraulic pumps are doing all the work here. And if installed correctly, they do their job well.

RELATED: 14 Disturbing Photos Of People Who Modified Their Bikes

Lowriders may not be up to everyone’s taste, but do remember that they don’t come cheap. A car like this has many hydraulic pumps attached to its suspension, and each pump puts you back by $500 or so. Anyone who has this done to their car has spare change and is a rather dedicated fan of this car culture.

Since these cars are meant to show off their prowess and chassis parts, having them look spiffy from the bottom up is a good idea and one we hope more lowriders would take up.

5 A Lowrider Parade On The Go

While it’s awesome to see so many vintage and classic cars on the road, wait till they start turning their tricks. These are lowriders, and out on a parade of sorts for your viewing pleasure. Of course, don’t expect any need-for-speed drivers in these cars, because hydraulics limit the speed of the car to snail-like crawls.

The way the bed has been sealed into a wagon-like enclosure on this teal-blue pickup, we can only hope some hard cocktails are being brewed, shaken and stirred within its confines.

Hey, big things have big dreams too. So if cars and trucks can do it, why not a bus? Despite the hack job of paint on this one, with some trippin’ stars and stripes and other graffiti that we cannot understand, the hydraulics are doing a fantastic job of taking this bus where no bus has ever gone before.

2 When You Want To Fly

Maybe this high-reaching lowrider belongs to someone who has aviation dreams, but no actual talent to fly a plane. So the next best thing is to take your car on a trip to hydraulic la-la land, right? Maybe, maybe not, but it seems to suit the car and its owner just fine.

So if it can be done to cars, buses, and pickup trucks, why not a van? And with that grin on the driver’s face, it’s pretty clear whose idea it was to take a perfectly serviceable van in black and turn it into a lowrider that can show off its bottom, but not do anything else a van can do.

NEXT: The 15 Craziest Engines In Motorcycles, Ever

Arun Singh Pundir has been a longtime media crackerjack and worked most of his life in sales and marketing. In 2018, he officially flipped and switched sides to the editorial. He lives with his wife, two rascally sons and is a car and motorcycle nut in his free time. Not that he has too much free time. He currently writes for HotCars on anything that has any number or kind of wheels. He is also penning pop culture, lifestyle and all things rich for TheRichest. For now, he considers his Isuzu D-Max V-Cross, Suzuki Ciaz, and Royal Enfield Classic 500, the three current flames of his life. His dream is to drive around the world; even if it takes more than eighty days.

Dove hunters, get out your notebook | News, Sports, Jobs

Tay fire department looking to welcome back an old friend