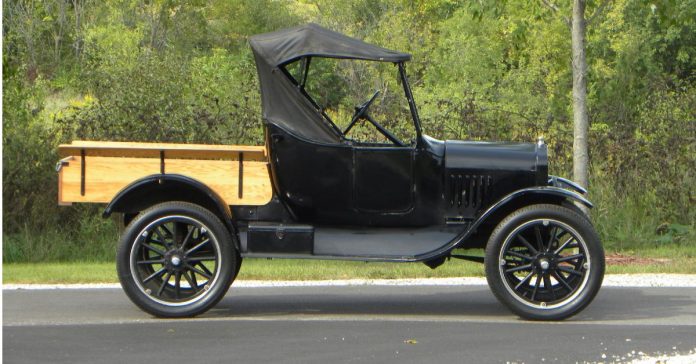 The first pickup truck arrived just after the beginning of the 20th century, as the world’s first pickup truck was actually a variant of Ford’s classic Model T. Ford had no idea what they’d stumbled onto at the time. Their invention quickly became popular and would later evolve into America’s Top Truck. Although the cabs in these Model Ts were new, the pickup boxes used were carried over from the Model T.

Ford produced 75,000 beds and 34,000 of the pickup vehicles in 1926. These new models showcased a new body, new engine, new transmission, new frames, and new wheels. They also were known to use four-cylinder engines, which were relatively new at the time. These new engines displaced approximately 200 cubic inches and produced 40 horsepower at 2200 RPM.

New three-speed manual transmissions backed up these newer engines, and the public found them easier to use than the earlier transmissions that were used in all the Model T’s. As of 2020, the only car manufacturer to produce more single model cars than the Ford Model T is Volkswagen’s Beetle, surpassing Ford’s record on February 17, 1972.

Here are a few more facts about the world first pickup truck.

15 The Ford Model T Runabout Was The First Pickup Truck

A variation on the first Ford Model T was actually considered the first official pickup truck. The specific variant was the Ford Model T Runabout with a pickup body. Henry Ford produced this vehicle in 1925 in his factories. Pickup trucks’ styles have been known to vary greatly after factoring make, model, purpose, and region.

14 Its First Evolution Was The Model A

A few years later, the Ford Model T pickup truck got its first evolution: the Ford Model A, in 1928. It was the only option available to customers, with only the Open Cab style initially available. The Model A featured a newly-styled body that Ford received, courtesy of Briggs Manufacturing. The Ford Model A also had a non-retractable soft top that used side curtains of canvas and mica to keep out the elements.

In today’s money, a Ford Model T pickup truck costs $3,922. When adjusted for lack of inflation, back in 1925, that only amounts to $281 for a whole vehicle. In 95 years, the price has officially skyrocketed. It was officially called the Ford Model T Runabout with Pickup Body.

Ford knew they had something popular and innovative when the Model T managed to sell 33,800 models in its first year. Although Ford was inspired by this sudden sales boom of the Ford Model T Runabout with Pickup Body, they decided to proceed with changes for the following year’s design.

When the Ford Model T Runabout with Pickup Body was produced between 1908 and 1927, more than 15 million Ford Model T’s were produced in five states and eleven countries. After a prosperous 19-year run, production on the Ford Model T ended ceremoniously in 1927. It was known for being the first affordable automobile.

Related: Toyota Tundra Vs Ford F-150: Which Is The Better Off-Road Truck?

Ford literally held an actual ceremony, albeit modest, on May 26, 1927, to note the formal end of Model T production. Production of the Ford Model T officially ended after 19 years, after 15,007,033 units had been built. With more than 15 Million Model Ts sold, it became the most sold vehicle than any other car model in history for the next 50 years. In the 1970s, the Volkswagen Beetle would eclipse its record.

9 The Doors Were Recycled

Ford often recycled car parts between similar models. Case in point: the doors. When it comes to differentiating between a 1927 Model T and a 1928 Model A, the fenders and body looking almost identical made differentiating difficult. The door of a 1928 Model A closed cab pickup truck would likely be a Model T door off of the Model T pickup.

8 The Restyle Was Seen As Radical

Ford gave the Model Ts a restyle for 1926, a move the public deemed “radical.” As part of the redesign, Ford Model Ts got a taller hood that flowed straight into the cowl, and further changes were made to the cowl panel, hood, fenders, and running board. Headlights moved from the sides of the radiator to the front fenders, an opening on the driver’s side was added for a door. Further, Ford added an electric starter, battery, and demountable tires. These enhancements boosted the price by $85.

7 It Had A Four-Cylinder Engine

The Ford Model T Runabout with Pickup Body ran on a four-cylinder engine that generated 20 horsepower. It could also achieve a top speed of 45 miles per hour, and it could use gasoline, kerosene, or ethanol for fuel. The Model T transmission offered two forward speeds and a reverse gear, as well as adjustment levers on the steering wheel for further control.

6 It Was Manufactured In 15 Various Body Styles

The Model T was manufactured in 15 various body styles. One of those body styles was a chassis-only style for independent coachbuilders. In the early years of the automobile, many of those coachbuilders were still producing carriages.

5 It Was The First To Use The Assembly Line

Another notable thing about the Ford Model T was that it was the first vehicle to use the assembly line for production. This decreased production time from 12.5 hours to 93 minutes per car. Every three minutes, a new Model T was coming off the production line. Half the world’s cars were Fords when Ford produced its 10 millionth Model T.

4 Black And Green Were Color Options

The Ford Model T was initially available in only black or green. The entire vehicle was painted black on the block models. However, on the green models, the fenders and radiator shells were still painted black. The bed was an additional $25 charge, and the customer had to bolt it to the chassis to modify their Model T into a Model T pickup.

3 The Bed Was Made For Modifications

This new Ford pickup had a bed made for modifications. The bed was made entirely of steel and measured 56 inches long, 40 inches wide, and 13 inches high. It was tiny compared to today’s F-150s and Super Duties. Further, the bed’s tailgate was adjustable, and both sides of the bed had holes to insert stakes for additional side panels.

2 Its Engine Had Only 20 Horsepower

The Ford Model T pickup truck only had 20 horsepower, which may be weak by today’s standards, but was a lot for its time. It also featured two-speed transmission in a four-cylinder engine that measured 177 cubic inches.

1 Amenities Were Offered As A Result Of Popularity

As a result of pickup trucks’ unprecedented popularity, Ford began to offer amenities with their Model T Runabout. One option, as mentioned earlier, was allowing the customer to include a truck bed. Meanwhile, Ford was also mass-producing more units of the Model T Runabout with Pickup Body. And when the innovative Model A pickup truck was sold in 1928, it featured roll-up windows and a fully-steel cab.

Next: 15 Pickup Trucks With The Coolest Gauge Clusters


Next
Here Are The Sickest Ford Restomods We’ve Ever Seen

Kenny graduated with a Bachelor of Science in Communication from the University of Indianapolis. He has since gone on to be a reporter for and write for three newspapers following graduation. Kenny also has experience editing websites using WordPress, and he directed a newspaper team to produce two issues during Indianapolis’ 2012 Super Bowl. Kenny was hired onto Valnet to write list articles in March 2020. In his free time, Kenny is often out socializing with friends, practicing karate, reading comics, discussing the Enneagram, or at a game night.

Welcome To A Kentucky Derby Day Like No Other