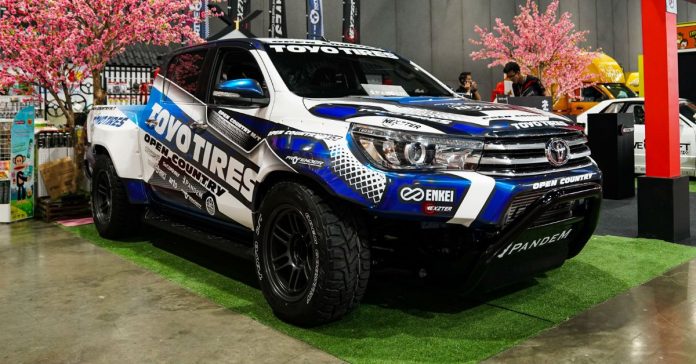 Pickup trucks have a certain appeal to them. Maybe it is the blue-collar practicality, the utility that is offered by the flatbed or even the rugged build that transforms a pickup truck into a dependable companion.

Maybe this is the reason behind the popularity of Japanese pickups? Because if it is the dependability that forms this strong bond between a man and his machine, then these workhorses are most likely your best friends.

Even though most of the world considers the pickup to be an American motoring icon, Japanese trucks have their dedicated fan following. As the automotive industry witnessed a substantial shift in trend with more and more buyers opting for utilitarian models over conventional family offerings, even electric vehicle manufacturers have thrown their hats in the ring trying to capitalize on the growing popularity of this segment. For now, we have compiled a list of 15 modified Japanese pickups that demand your undivided attention.

We all remember the Mazda Furai, a beautiful and capable concept car that met its end much before its time. At the time, Mazda was capitalizing on its Nagare design language, hints of which are evident in this BT-50 pickup customized by Vogue Industries. The lines of the truck flow with and complement the new bumper design along with rest of the styling upgrades

RELATED: 15 Pickups That Are Actually Too Fast For Their Own Good

This truck is a beautiful, road-going race car with a flatbed. The pickup rides on 15- in alloy wheels which were custom-built for this truck after tracking down the molds for the original rally-spec units. The rear wheels protrude by 2.5 inches over the front wheels and this is one of the many custom mods that make this Datsun stand out.

Any truck that can take on the challenging surfaces of the arctic and its frigid temperatures is good enough for us. This indestructible Toyota Hilux was modified by the Top Gear team and Arctic Trucks from Iceland.

Equipped with its large off-road tires, unnecessary auxiliary lights and a rifle rack, this truck didn’t just look good but won the challenge for Clarkson and May.

Toyota Land Cruisers are pretty much bulletproof which makes them a tempting prospect, to begin with. Enter Proffitt, a Colorado-based restoration outfit that has not only restored but also modified the pickup.

There is no substitute for the excitement one feels right before they get their driver’s license for the first time and what better way to celebrate the day leading up to it than by customizing your ride.

This is Gabriel’s Hijet in Skyline’s gunmetal grey with fifth-generation Hijet skirts and front lip. Other aesthetic enhancements include a red underglow setup and a Kenwood touchscreen music system.

Injection motorsport has stylized a Pandem body kit wearing Hilux to look like an intimidating road-going racecar. The flared and muscular wheel arches flow well with the curvaceous lines of the truck and the skid plate at the front paired with the crash guard enhances the ruggedness of the slammed truck.

The best part of an OEM modifying its production models is that it instills confidence in the buyer for doing the same. This truck is the result of a collaboration between Toyo tires and Isuzu Ute Australia. Design highlights of this modified monster truck include the huge 38-inch tires, updated suspension, steel wide-body kits, and a completely redesigned bumper.

Unlike his British Top Gear counterparts, Rutledge has a penchant for pickup trucks and loves his Toyota “Fundra”. This 2008 Tundra is a single cab short bed example and the pickup rides on 20X12 wheels. This truck was one of three examples built under the OMEGA project by TRD and was, in fact, a show truck until it was decommissioned after being in an accident with a forklift.

There are very few cars, even tanks for that matter that can intimidate a Devolro Interceptor. These trucks are built by a Miami-based company and have been designed for high priority clientele. Some key modifications include a B6 standard hybrid armor system, luxury upholstery, extended cargo-carrying capability and next-generation gadgetry for the passengers.

Kei Miura’s brainchild is exactly what any gearhead would want. The Rocket Bunny wide-body kits for Datsun 620 are coveted across the globe by both racers and flaunters alike. Thanks to its impressive build quality every Rocket Bunny Datsun comes together like a charm. These models are 3D printed after the vehicle is laser scanned and only get fabricated once Miura has worked his magic on the model.

Another concept brought to us straight from the OEM stables. The Triton Absolute was Mitsubishi making an extreme statement at the 2019 Bangkok International Motor Show. The truck exudes an awe-inspiring marriage of ruggedness and upscale styling. We love the contrasting red highlights, the carbon fiber flares and the raised height that bestows the pickup with a menacing stance.

Extreme Automobile in Japan took a Mazda B-series pickup and delivered a fusion between a show truck and a drift car. The Yokohama based truck uses an extended cab setup and the chassis has been tuned to help the beast go sideways. There are even cutouts in the flatbed that allow the spectators to admire the customizer’s handiwork.

We seldom find projects that embody high-class style and sophistication like this Datsun 620 does. The paint job, for instance, was done with such precision and care that even though the color seems to be black, it is green. We also love the 17X8 alloy wheels and the slammed look courtesy of the air suspension.

Other than the sporty side decals, the Toyota Hilux Black Rally edition gets blacked-out double-spoke rally wheels and TRD badging. The same badging can also be found on the mud flaps. At the rear, Toyota has replaced the standard exhausts with a dual chrome unit. Toyota made two examples featuring these modifications which included an extended cab model and a dual cab variant.

Jon Sibal is responsible for penning some of our favorite DC and Marvel characters which makes it no surprise that he came up with this piece of art. A ‘Performance Truck’ purpose-built to go sideways with a murdered-out paint scheme that probably belongs in the Batcave. Other than the doors every part of this truck is bespoke including the large rear wing, diffuser and flared fenders.


Next
15 Expensive Trucks And SUVs That Depreciate Like Crazy

My garage so far has been house to a Ford Fiesta, a Toyota Tercel, a Porsche Cayenne and a KTM RC 390 and I love driving more than riding, so please bear with me.

Drivers, Restraints, Opportunities, Trends, and Forecast up to 2026 – Owned

Food vendors find ways to steer through the pandemic while reeling...