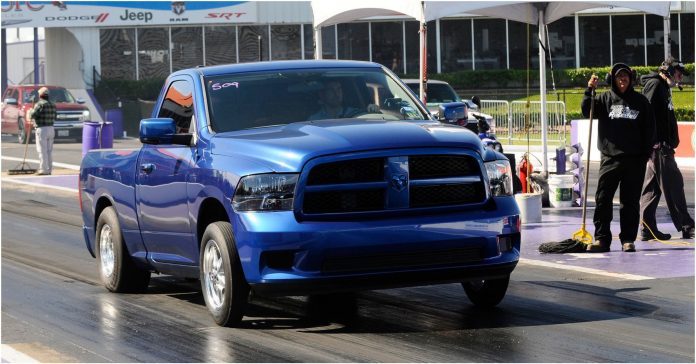 Here are some pickups you don’t have to be embarrassed to take to a drag race. They’ll smoke most of the sports cars in their price range.

There was a time when speed was mainly the domain of supercars and the oddball sedan. However, that has gradually shifted over time and carmakers have expanded that territory to include even the unlikeliest of vehicles – pickups. By nature, pickups are designed to be functional and practical; able to haul small amounts of cargo and fulfill a critical part of the supply chain.

That core function remains largely unchanged today but automobile companies have figured out a way to incorporate other elements that ensure your pickup can also fulfill that itch for speed should you feel the urge to indulge. Pickups are now fitted with powerplants which, together with other mechanical enhancements, have the ability to surprise the unwary highway driver cruising along in his stately sedan.

Some of the pickups here will take home medals from competing with smaller cars at the drag strip. There’s even one that’s faster than a base model Porsche 718 Cayman – now that’s mighty impressive.

2004 was the last model year for the F150 SVT Lightning, but what a machine that was. It struck a perfect balance between the functionality of a pickup and the handling of a sports car. Even in stock form, the supercharged V8 under the hood was good enough to get the car to 60 mph in a scant 5.1 seconds before surging past the quarter-mile in 13.6 seconds at over 100 mph.

The Tremor is not a purpose-built performance truck like the F150-Lightning but it will still get the job done when it comes to speed and acceleration. It is powered by the widely acclaimed Ford EcoBoost twin-turbocharged V6 engine which will get the Tremor flying past 60 mph in 5.8 seconds.

There was a time when Dodge decided to drop the Viper’s V10 power plant into a truck and pair it with a 6-speed manual transmission. It turned out to be a pretty good idea – in the form of this tire-shredding monster. The Dodge RAM SRT-10 has a savage acceleration that will make you quickly forget it’s a truck. It’s fast too; able to hit 60mph in 5.2 seconds.

The 2016 GMC Sierra Denali is a big truck, weighing in at about 2,600kg. That’s why its performance in the speed department is all the more impressive. The 6.2-liter V8 engine under the hood can put out 420 hp and that will put up a stiff challenge on the drag strip. The GMC Denali can haul its mass from 0 to 60 mph in just under 6 seconds – 5.8 seconds to be exact.

This is the fastest truck built by Chevrolet – without modifications – and it’s well worthy of that title. The High Country is a top-level trim and is loaded with a host of gadgets that push its weight to the 2.5-ton mark but the 6.2-liter V8 engine shrugs it off easily and hauls the truck to 60 mph in 6.0 seconds before going on to do the quarter-mile 8.6 seconds later at 96.6 mph.

The first Raptor debuted in 2010 and 10 years later, Ford is showing no signs of slowing down. The 2020 SVT Raptor is loaded with even more goodies that enhances its image as a proper performance truck. It will conquer almost any off-road terrain but we also love what it will do on smooth ground; mash the pedal and the truck will dutifully oblige by hitting 60 mph in 5.5 seconds.

Hennessey has never been quiet about its ambition to create the fastest vehicles ever; be it sedan, SUV or pickup. This Velociraptor Ford Ranger is one of such creations. The power has been bumped by 90 hp, over the stock Ford Ranger, to an impressive 360 hp. That, and a host of other tweaks, have transformed the docile Ranger into a mean machine – one that will need only 4.9 seconds to hit 60 mph.

The Tundra is a functional pickup that will get the job done in a very efficient manner. However, it will also oblige with some high-octane thrill if you decide to dial things up a notch. The Tundra Limited 4×4 is powered by a 381 hp V8 engine that can spool up quickly and propel the car to 60 mph in 6 seconds flat.

Here’s another Dodge pickup powerhouse that puts up very commendable stats in the speed department. That aggressive front-end styling is not just for show; just behind that frown sits a massive 5.7-liter HEMI V8 tuned to produce almost 400 hp and 407 pound-feet of torque. It only needs 5.7 seconds to hit 60 mph and it will continue to power on past the quarter-mile in 14.4 seconds.

There are few cars more aptly named than the Nitemare F150, a pickup that Roush claims is the current record holder for the fastest production truck today. The figures are right there too to back up the claim. A 60 mph sprint will be over in a frankly ridiculous 3.9 seconds. That’s proper sports car territory.

The pickups from this giant Japanese carmaker are usually not known for speed but there are a few exceptions. The ‘TRD’ here means ‘Toyota Racing Development’ and that’s a clear indication of the capabilities of the supercharged Tundra. It will hit 60 mph in 4.4 seconds, faster than a Mustang GT or Dodge Challenger models of that time.

There’s a very interesting account of a matchup between the 1991 GMC Syclone and a brand-new Ferrari 348TS. It seems inconceivable but the pickup did beat the Ferrari to 60 mph from a standing start. The 4.3-liter turbocharged V6, helped by some clever design mechanics, was able to achieve this feat in an incredible 4.3 seconds.

This lightweight pickup sheds some serious weight and successfully translates that advantage to significant gains where speed is concerned. The pickup is powered by a 3.6-liter V6, mated to an 8-speed automatic, that is still powerful enough for a 6.1-second gallop to 60 mph. The truck continues to accelerate too, crossing the quarter-mile in just under 15 seconds at almost 100 mph.

This truck may be a little way down in the pecking order due to a fierce loyalty to brands like Ford, Chevrolet, and Ram. However, write it off at your own peril. The Nissan Titan’s 0 – 60 mph sprint time of 6.5 seconds makes it the slowest modern truck on this list but that stat is still pretty commendable for a non-performance vehicle that tops out at over 2,500 kg.

It’s the oldest truck here but one that’s earned every right to be included. This proper hotrod was a surprise in its day; under that boxy hood lay a high-performance V8 engine that needed only 7 seconds to hit 60 mph and it would continue accelerating rapidly until around 100mph when aerodynamics really started to object to that boxy design.

Next: Here Are The Sporty Cars You Should Buy Now Before It’s Too Late

A simple bloke with a not-so-simple car obsession!

After facing tough setbacks, here’s how these area nonprofits are changing...