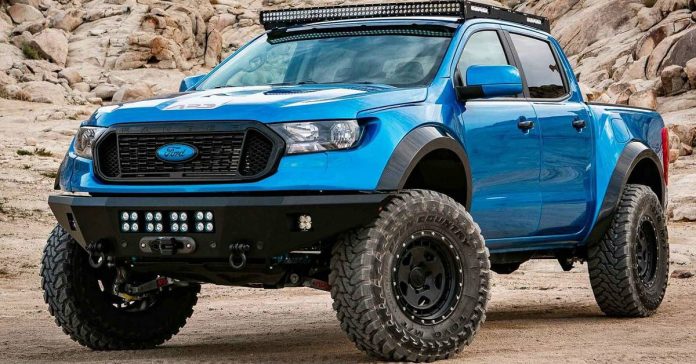 The Ford Ranger is a very likeable and capable truck, but modify it right and every aspect of it will be even better.

The history of the Ranger doesn’t start with the first truck to use this name. For many years before it would find its rightful home, the company experimented with the nameplate. Ford knew it wanted to use it, but couldn’t find where it belonged. Nowadays, the Ranger is associated with outdoors folk. It’s a keeper of countryside. However, the first vehicle to get a Ranger name was a 1958 sedan. That obviously missed the mark.

In the ’80s, the Ranger started the path to become its own line. Ford introduced the F-150 that took over the F-100 sales, so the second truck became redundant. Customers who wanted the F-100 were happy to get the F-150. At that time, the only smaller pickup that Ford had was the F-Courier. So, Ford axed the Courier and the F-100 together and created the Ranger. Here are 15 sick pics of custom Ford Rangers.

Autobot Autoworks Off-Road got a Ford Ranger WildTrack and modified it, turning it into this beast. One striking feature is the off-road wheels that consists of alloy wheels and huge tires. In order to install the wheels, the company had to adjust the height and add a MCC Rocker bar widebody kit that changed almost all components.

RELATED: 15 Reasons We Want To Take The Hennessey Ford Ranger VelociRaptor Round The Track

German tuning company Delta 4×4 used their own light alloy rim in matte black to create this truck. They say that this Ranger offers optimal traction for off-road use and provides a further 30 mm of ground clearance. In addition to that, the higher driver seating position gives a great overview.

APG offers a ProRunner set for the Ranger that includes larger and stronger drive shafts, widened wishbones and special mounts for the wheels. Add large off-road tires, a new suspension with custom dumpers and 12.5 inches of travel, and the Ranger becomes a real monster. You can upgrade your Ranger for $11K.

Tuner Tickford decided to build a unique compressor kit for the Ranger Raptor. The result is an engine that delivers 730 horsepower and 828 lb. ft. of torque. This engine makes the Raptor a true athlete. The majority of parts are made by the tuner himself. The Compressor package is available for $12K.

This Rambler RTR 2020 “can handle all driving situations with its Ford Performance all-terrain chassis. On top of that, there are some innovative extras. These include the powerful Ford Performance front winch integrated into the bumper, a winter-ready Yakima roof tent, the integrated snowboard holder and a built-in refrigerator for the weekend trip.”

Seen here is the Ford Ranger Lariat FX4 modified by PaxPower. They used custom wishbones and adjustable springs. With components such as modified air management and SCR performance chip tuning, the company could boost the power up to 210 hp. There is also a new paint job in metallic blue.

This Ranger features over 150 performance parts that help it conquer even the roughest terrain. This built was finished with the help of Ford Performance and Ford Accessories teams. They improved truck’s capability to move quickly when the pavement ends. This Ranger is perfect for camping people and those looking to get off the road.

According to the owner, “The backbone is an elaborate framework I knocked together using builder’s racks which serve as the skeleton for a one-off canvas canopy draped over the whole affair, providing easy access to my gear. The tailgate is lockable and I’ve got a secured setup for tools and camping gear alike.”

The owner bought the plain 2011 Ford Ranger XL in 2014 and gave it a complete makeover. He said he spent every weekend converting the truck into a drift machine. He has done everything imaginable except the engine swap. He says he gets drivers staring and giving the thumbs up.

The 1984 Ford Ranger was offered with a weak engine under the hood. This custom version, however, features a modified V8 unit. The project was done by a professional team called Anderson Brothers Customs. The truck features a chopped top and was painted in bright yellow with orange flame-like accents.

The Hellwig team wanted to build a truck that can be loaded with food, fuel and everything else several people need to spend 2 weeks in the wild. The truck can carry up to 1,100 pounds in the bed. It features custom helper springs and new sway bars to keep the machine steady.

This 1997 Ford Ranger isn’t only cool-looking, but also very capable. It was created for the desert running and dune jumping. The owner replaced gauges and seats, and the truck got a new cage for safety. The body is fitted with fiberglass fenders, hood and bedsides. The paint is custom.

Hennessey improved capabilities of this Ranger. A suspension upgrade raises the height by 4 inches, while 17-inch alloy wheels wrapped in BF Goodrich All-Terrain tires improve the stance. The front bumper got a tougher grille. LED lighting has been added to the front bumper, and the look is completed with black fender flares.

Seen here is the “custom 1991 Ford Ranger built for special police events. It is equipped with a police light bar, side spotlights, front mirror strobe light, rear window strobe light, PA system, and police pursuit flashing lights and siren. It is powered by a 4.0-liter V6 engine backed by an automatic transmission.”

NEXT: Check Out The Best Custom Jeep Gladiators… And One Hollywood Star!