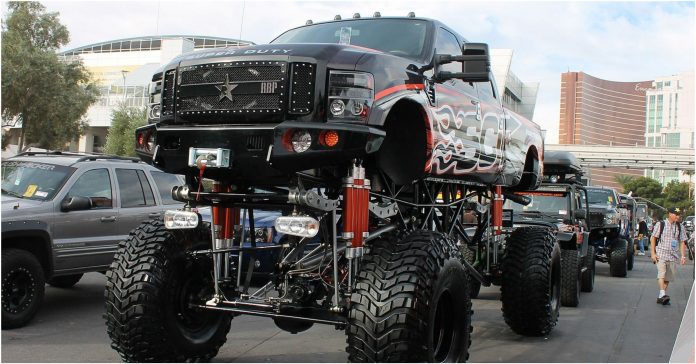 In every group, there’s the ‘odd bunch,’ so to speak. For JDM.-lovers, it’s ricers. For motorcycles, they’re called “squids,” and so on and so forth. The truck community too has its fair share of ugly ducklings. Not all of them are bad, though, but the ones that are truly stand out.

Whether it be modifications, driving styles, or a litany of other reasons, there are many things truck drivers do that we absolutely can’t stand. So, without delay, let’s dive head-first into fifteen of the worst things that truck owners do…

RELATED: 15 Used Pickup Trucks You Should Avoid With A Ten-Foot Pole

15 Kicking Up Their Mud

For the first issue, we have something that isn’t ugly (per se), but annoying. What we’re talking about are freshly mudded off-road trucks that kick up their dirt onto other cars. Nothing feels like more of a waste of time than spending hours washing your car, only to have it dirtied by some careless truck owner. For the sake of everyone else around you, please, clean your car!

Pulling up to a seemingly empty parking space, only to find a SmartCar hidden there is bad enough. What’s worse, though, is when someone takes up too many spots unnecessarily. Sadly, this characteristic is all too frequent in a number of truck drivers. Just because you’ve got a big vehicle, doesn’t mean that you get a free “Park however you want” pass…

The trucking community isn’t free from the usual problems plaguing car culture as a whole. Here and there, you can find some absolutely disgusting body kits on old, cheap, pick-ups; reminiscent of those on ’90s Honda Civics. And therein lies the point: if you’re going to spend a couple hundred bucks for an eBay kit, you might as well just get a Civic instead.

Having a huge, lumbering off-road machine can give undue confidence to the driver. Similar to sports car owners, they may feel that their purchasing their car also buys them the skill. It doesn’t. As such, you’ll find plenty of instances where truck drivers got too big for their britches: like trying to beat traffic, road-raging, etc.

RELATED: 10 Celebs Who Crashed Their Expensive Rides (And 5 Who Drive Like A Pro)

Those not intimately familiar with truck culture probably have no idea the extent to which these enthusiasts obsess over toolboxes. Instead of being a literal tool, some turn them into different designs; often flaunting theirs over others. There’s nothing wrong with customizing your ride, that is until you start shoving it into people’s faces; turning it into a competition instead of a design choice.

What do we mean by ‘poser?’ Well, a good place to see this first-hand is in younger communities, such as high schools. Often times, students may drive large trucks, wave a rebel flag, and proclaim their “country” status. In reality, though, the only thing that links them with hard-working farmers is their taste in vehicles. Nevertheless, a truck can help a suburban teenager L.A.R.P. as a ‘redneck’ for a little bit.

For those who have never heard of this term before, allow us to elaborate. “Rolling coal” refers to the process of dumping a large amount of black, diesel, smoke from their exhausts. Not only is it harmful to the environment, but it’s also used as a tool to cover bystanders/cars in a deep coat of black soot.

Air-ride suspension (better known as the act of “bagging”) is awesome on a ton of cars. That being said, though, there is still a lot that should avoid bagging all together. One of those is pick-up trucks, especially on models that could do much better. We get that it’s someone’s personal taste, but we still can’t help disliking the concept.

RELATED: 15 Perfectly Stanced Cars We Would Love To Own

7 Going Where No One Should

Earlier, we discussed a truck owners’ tendency to overvalue their capabilities in a big, jacked-up truck. Naturally, this leads to some precarious situations, like the one pictured above. On the interstate, you may’ve seen F-150’s cutting through grass medians to beat traffic, attempt to enter sectioned off areas, etc. Having Monster Energy stickers all over your truck doesn’t make you B.J. Baldwin…

This one is, by far, the worst of the bunch. Obviously, we’re talking about a truck owner’s superiority complex; also referred to as “compensating.” These fools believe that simply having a big, gas-guzzling, pick-up makes them God of the road! They’ll cut people off, have no concern for fellow motorists, cause accidents, and so on. Honestly, driving a truck like that doesn’t make you better, it makes you an a**.

Underglow was popular back in the early-2000’s, primarily due to The Fast and the Furious‘ fame, but that’s the past. The trend is (rightfully) seen as cheesy and unattractive on most vehicles, but not trucks. For some reason, the stigma surrounding underglow is almost absent in particular groups. Normally, removing stigma would be a good thing, however, when it’s concerning underglow, it is best to keep it in the grave.

This phenomenon has been around for quite some time. Surprisingly, it’s still very popular, regardless of how childish and dated the joke is. Of course, these tow-hitch mods resemble testicles, which is funny to anyone younger than 11. Mature adults, on the other hand, find it to be in bad taste, as well as weird overall.

There’s slamming a truck too low (which is bad enough) and then there’s lifting it to the heavens. For some reason, a handful of individuals can’t seem to find that perfect middle ground, going for something that mimics a monster truck instead. These kits are useful for off-road competitions, yet, we’d be willing to bet that barely any of them are used for that purpose. It’s kinda like swing-arm extensions on crotch-rockets.

Skipping leg day will prove to be a bad move over time, both in the gym and with cars. What do we mean by that? Wheels are, sometimes, compared to the legs of a car. They help support them, as well as contribute significantly to the overall aesthetic. However, like leg workouts, wheels are also frequently overlooked. It does make for a hilarious visual, though, whether it’s intentional or not.

A ‘Bro-dozer’ is what happens when you combine the last five points: a superiority complex, underglows, lift kits, and tiny wheels. Sometimes, just one eye-sore isn’t enough, so they go all out. As a result, these particular types of trucks have fallen into their own category: Bro-dozers. No relation to the Monster Jam truck…

NEXT: INKAS 2020 Lincoln Navigator Is Awash In Armored Luxury

James Jacobs is a freelance writer and U.C.F. Undergraduate student. I’ve been a busser, food-runner, host, and tutor previously. Now, I work for Valnet and HotCars as a writer, discussing and analyzing my passion: Cars and the automotive industry in general.

Inventory Levels Have Dealers Freaking Out

Pedestrian, 78, dies of her injuries after being hit by pickup truck in Renfrew

March trailer orders down; April expected to be worse

Scout Olympic camper truck can sleep up to 6 people for...