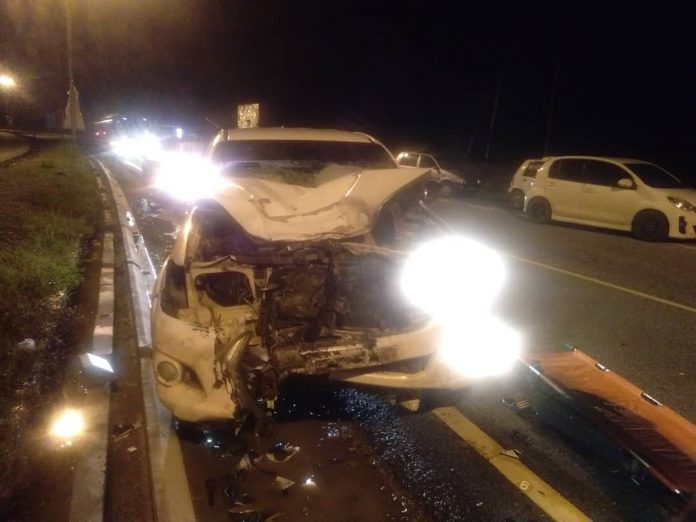 The damaged pickup truck at the scene last night.

KUCHING: A male motorcyclist and his pillion rider died after being involved in a colliding head-on with a pickup truck at the Jalan Serian by-pass around 9.10pm last night.

Sarawak Traffic Investigation and Enforcement chief Supt Alexson Naga Chabu, who confirmed the incident, said the deceased has been identified as Nick Noah Niklas and Neavin Danny, both 18 years-old.

“Both victims had suffered from serious head injuries and were pronounced dead at the scene by a medical personnel,” said Alexson.

He added that the two deceased had been heading towards Sri Aman while the pickup truck, driven by a a 40-year-old male from Jalan Tondong, Batu Kawa was heading towards Balai Ringin.

According to the driver of the pickup truck, he was trying to avoid two motorcycles who were coming in his direction from the wrong side of the road.

To avoid colliding with the two motorcycles, the driver swerved his vehicle onto the right lane (oncoming lane) which caused the collision.

The driver of the pick-up truck did not sustain any physical injuries and the case is currently being investigated under Section 41 of the Road Transport Act.

MTA employee handcuffed after crash with Pepsi truck in Midtown –...

COVID-19 impact on Axle & Shaft for Pickup and Trucks Market...