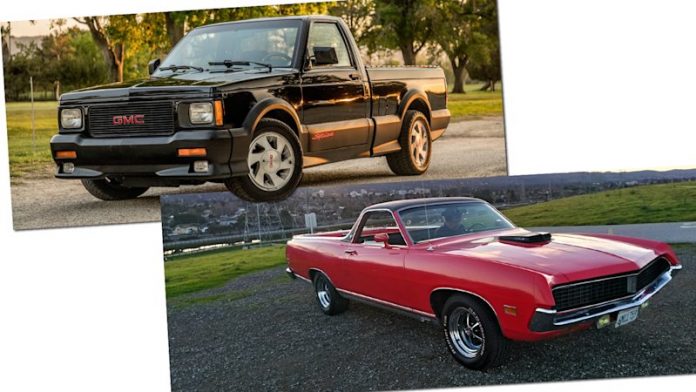 High-performance pickups would appear to be having a moment on the auction site Bring a Trailer, with two tempting examples up for auction right now: a 1971 Ford Ranchero GT and a 1991 GMC Syclone. These trucks are a generation apart, but they each represent the peak muscle truck of their time.

The Ranchero, of course, was Ford’s car-based pickup, and Ford took advantage of its Torino roots by offering the same ultra-high-performance 429 Cobra Jet V8 in the Ranchero as it did in the Torino-branded coupes and convertibles. The 429 V8 in this truck is said to be numbers-matching, and it looks the business topped with an air scoop poking through the hood. It’s paired with a three-speed automatic and a limited slip differential, reportedly one of only 82 1971-model Rancheros with this powertrain combo. As a Ranchero GT, this example sports hidden headlights, and the dual sport mirrors and vinyl top further establish its kinship with its passenger-car siblings. A set of factory Magnum 500 wheels and a respray in the original red add to the muscle-truck vibe.

Two decades later, car-based pickups were dead, so when GMC decided to revive the muscle-truck genre it did so with the mid-size Sonoma. The resulting Syclone put a more modern spin on the fast-pickup idea (and on the spelling of “cyclone”). This hi-po hauler uses a 4.3-liter V6 topped with a Mitsubishi turbocharger that helped it make 280 horsepower. It’s mated to a floor-shifted four-speed automatic and a Borg-Warner all-wheel-drive system with a 35/65 torque split. The Syclone was a one-year-only model, of which just under 3,000 were built. All were black with matching cloth seats with red accents.

The only other ’71 Ranchero to appear on BaT was a non-original GT with a 351ci V8 that was a no-sale at $7,900. This Ranchero is already nearly double that figure. Of the four previously Syclones that have crossed BaT’s virtual auction block, two have sold, for $36,000 and $50,000, but both had lower miles than this truck. At this writing, these two trucks are neck-and-neck, both in the mid teens with both auctions set to end April 23. Which powerhouse pickup makes you want to put your money down?