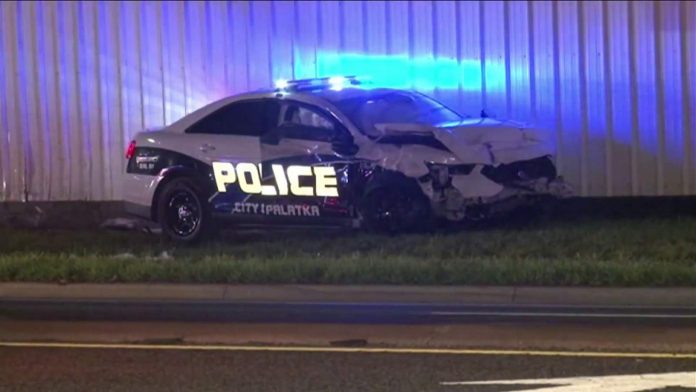 PALATKA, Fla. – Two men died late Friday night when their pickup truck crossed in front of a Palatka Police cruiser on U.S. 17 in Putnam County and was struck, police said.

According to the Florida Highway Patrol, the officer was headed east on Reid Street (U.S. 17) about 10:40 p.m. when the pickup truck failed to yield at the intersection of 14th Street South.

The front of the patrol car slammed into the driver’s side of the truck, and the impact flipped the truck. The patrol car kept rolling after the crash, jumped a curb and ended up hitting a mattress store building nearby, troopers said.

Tire marks from the cruiser could still be seen in the street Saturday, and the impact left a dent in the building.

The crash happened only blocks from the Palatka Police headquarters on Reid Street. Nearby business owners said it’s rare to see accidents on that road so the deadly crash was surprising.

According to troopers, the 31-year-old officer was hospitalized with serious injuries. The FHP report indicates the officer was also not wearing a seat belt.

He was still in the hospital Saturday.

A Palatka Police Department spokesperson said the officer has been on the force just under a year.

FHP reports no longer include the names of crash victims.

Here are the steps Hyundai-Kia is taking towards hydrogen cars