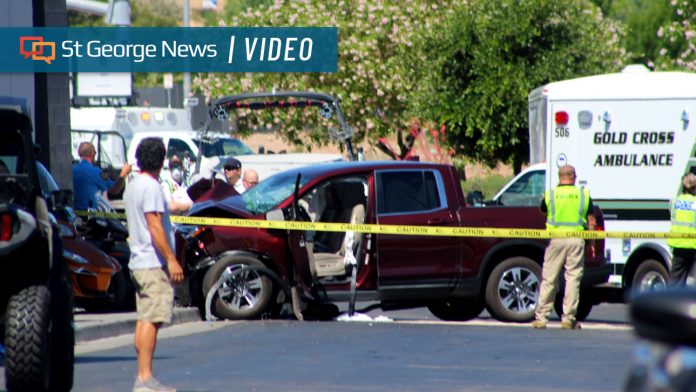 ST. GEORGE — An elderly couple was seriously injured when their pickup truck crashed into a local car dealership on Hilton Drive Thursday morning.

Shortly after 10:15 a.m., officers and emergency personnel responded to the intersection of South Hilton and Indian Hills Drive on a reported single-vehicle crash. The incident involved a red Honda pickup truck that crashed into a car dealership located just south of the intersection.

St. George Police Sgt. Dave Williams told St. George News that officers arrived to find the truck near the entrance of the dealership with an elderly couple inside who had sustained serious injuries.

“We don’t have an exact age on the driver and his passenger right now, but they both appeared to be elderly,” Williams said.

Gold Cross Ambulance sent two ambulances and a supervisor to the scene to evaluate and treat the injured patients. Both were being stabilized before being transported to Dixie Regional Medical Center.

According to witness statements taken at the scene, Williams said the Honda was traveling south on Indian Hills and continued straight through the intersection where it entered the parking lot of the dealership and collided with a large pillar located near the front entrance of the building.

The St. George Fire Department also responded and checked the pillar, which sustained damage but appeared to be structurally sound.

“The structure does not appear to be in any danger and everything there seems to be okay,” Williams said.

The St. George Accident Reconstruction Team was called out to take measurements, check the status of the traffic lights at the time the pickup entered the intersection, plot GPS coordinates and conduct a crash investigation to determine the cause.

Williams said a thorough investigation will be conducted, adding that their primary concern at the scene was to treat the injured and to make sure there were no public safety risks associated with the crash, which he said there were not.

The intersection was blocked and Hilton Drive was closed in both directions to allow officers to take measurements and map the scene using a drone provided by the Utah Department of Transportation’s Incident Management Team.

The St. George Police Department, St. George Fire Department, Utah Highway Patrol, Utah Department of Transportation and Gold Cross Ambulance resounded and tended to the scene. The vehicle was later towed from the scene and no injuries involving customers or bystanders were reported.

Cody Blowers was raised in South San Francisco, California. A 2013 graduate of Colorado Technical University, Cody earned her bachelor’s degree in criminal justice with a minor in paralegal studies. Through the course of her academic studies she discovered that writing is her true passion, and she is committed to providing credible, integrated news coverage. Cody joined St. George News in 2015, and when she’s not busy chasing the news, she can generally be found chasing her young granddaughter, Kali.