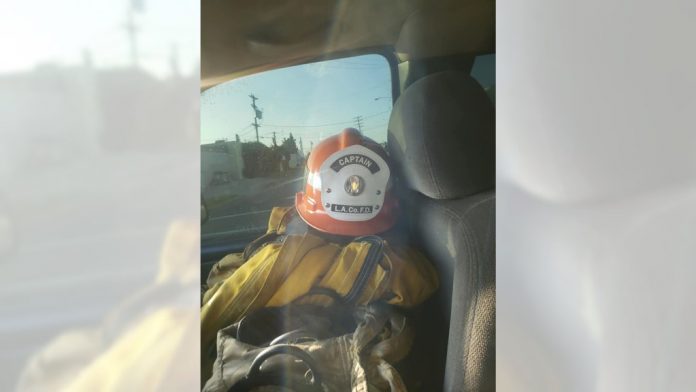 On his second night back home with his family after a month spent reporting to a growing number of people with flu-like symptoms and for some, the new coronavirus, Craig Heard, a Los Angeles County fire captain, was sleeping next to his wife in their Whittier house when a thief began to pick the lock of his pickup truck.

Inside the covered bed of the truck sat all of his fire gear, personal protective equipment and uniforms. On a normal day, Heard would have plopped his things in the living room. But he has adjusted to his new normal, reporting to medical calls where he came in contact with about 20 patients who eventually tested positive for COVID-19, two of whom required hospitalization. To protect his family from infection, Heard left his gear, possibly infected by the virus, inside his pickup.

A surveillance camera from Heard’s home shows a dark-colored truck pull up next to Heard’s white pickup on April 10. A man gets out of the truck. It takes him a little over one minute to unlock the door, start the truck, flip on the headlights and drive away.

The next morning, Heard, 41, went outside to run an errand, and instead of seeing his white 2005 GMC, he saw the concrete curb and an empty patch of asphalt.

“I was pretty shocked,” Heard said, adding this was the first time he had been victim of theft.

Though crime has been down across Southern California while most people are staying home to prevent the spread of the coronavirus, some thieves have still been up to the task. And for those on the front lines of carrying out their jobs in the face of the pandemic, such as first responders and healthcare workers, being a victim of theft can feel extra shocking and untimely.

Donna Burbaj, 31, a home health nurse living in Riverside, was isolated in her room after testing positive for COVID-19 when a thief decided to steal from her. She had contracted the virus from a relative who also works in healthcare, a cardiologist.

On Wednesday morning, Burbaj awoke to a call from her roommate. The doors of her car were open. Burbaj’s boyfriend went to investigate: the glove compartment and center console were ajar, and missing from the backseat were her two work bags, full of medical supplies and equipment.

Inside the bags were surgical masks, gloves, Clorox wipes, a blood pressure monitor, a thermometer, syringes and needles, and a stethoscope. Similar to Heard, Burbaj kept the bags in her car to prevent possible spread of the virus to her three roommates.

Burbaj said she spent a part of that morning crying, processing the feeling of being violated, an uninvited stranger stepping into her domain, another problem to deal with in what had already been a stressful week in isolation.

“It just sucks. I go out to different people’s houses and I know even in our office, they’re low on supplies and masks,” Burbaj said.

Most of her patients are elderly and have chronic illness such as diabetes that put them at higher risk of developing severe symptoms if they contract the COVID-19 virus. Wearing personal protection equipment while in their homes can mean a matter of life or death for her patients.

Both Burbaj and Heard have had to pay out of pocket to replace some of their equipment.

While the county is covering the cost for his helmet, jacket, pants, and air respirator mask, he has to pay for his uniform, boots, badge, helmet shield, gloves, and all of his tools, such as cutting devices used when extricating people trapped inside their cars after a collision.

Burbaj’s sister blasted out the experience of that theft on Instagram and was able to raise enough funds to cover most of the costs to replace the equipment. But prices for things have inflated. A forehead thermometer that had cost her $20 to $40 now runs at about $100 online, she said.

But among the stolen items were irreplaceable things. Burbaj’s stethoscope was a gift from her boyfriend after she graduated from nursing school. And in Heard’s glove compartment were various mementos like old fire ID’s from his time as a firefighter with Ventura County fire in the 90s.

‘You can keep the truck’

Despite the uneasy feeling of having been stolen from, Burbaj said she gives the thief the benefit of the doubt. Perhaps they’re stealing because they are in a desperate situation themselves, she said. And she wonders if the thief had been exposed to the virus.

“I feel bad ’cause they touched things that I touched. And they were in a space where I coughed in and sneezed in. They’re technically exposed to that,” Burbaj said.

Heard thinks the thieves had no idea they were stealing from a firefighter. He acknowledged the pandemic has left many people struggling economically.

In an effort to at least recover his gear, Heard posted photos and messages onto various community pages on Facebook, some garnering thousands of views and shares.

“PLEASE, return my gear and badge to any Fire station, no questions asked,” Heard wrote in one of those posts. “You can keep the truck.”

Heard filed a police report with Whittier police. Though he thinks it’s likely the thieves freaked out when they saw the fire gear and tossed it into a dumpster.

“The world goes on. It’s just another day. I just gotta move on. It did suck. But you just gotta move forward,” Heard said. For now, when he returns to work, he will rely on some spare equipment at the fire station and plans to borrow some from co-workers.

For Burbaj, she is already focused on returning to work. She is considering a move from home health to inpatient care and has been applying at many hospitals that are trying to meet the rising demand for nurses. When her symptoms subside, she plans on getting tested again for the disease. If negative, she’s eager to head back, despite the ongoing risk of coming in contact with others daily.

“I feel like it’s something I’ve been trained for. It’s something where I always knew the risk,” she said. “More than ever I know I want to do this.”

Edmontonian hits the road with booked-up truck: ‘People have loved it’

Here are job-hunting strategies for those in mid-career and out of...