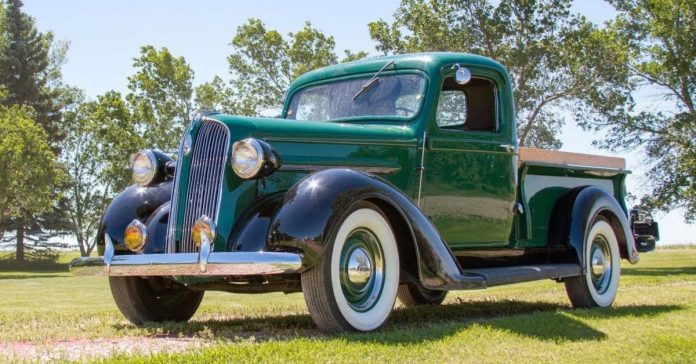 Pickup trucks came to prominence in the 1940s. With World War II ending and the boom of the suburbs, folks enjoyed a great ride to haul materials around. It took a while to get the pickup right and find the proper mix of a balanced ride and something strong enough to haul so much stuff. Usually, when folks mention “classic” pickups, they mean the 1960s and ‘70s or even the ‘50s. So it’s forgotten there were trucks coming before WWII.

Many of these models paved the way for the pickups we love today (especially Ford). There are models from long-forgotten manufacturers as well as trucks from companies not known for making these vehicles. A few may ring bells, but others are fun trucks (and a few not-so-fun ones) that have fallen through the cracks. Here are twenty pickups between 1920 and 1940 folks have forgotten about as a showcase of what truly makes a “classic” pickup.

Yes, this really existed. Virgil D. White applied for a patent and permission from Ford to build a snowmobile version of a Model T pickup. It finally came out in 1922, adding skis and chained tires/treads to the typical frame. The various attachments could allow it to get 19 mph on snow even if weighing it down too much was a bad idea.

It could also be adjusted to run on sand. White only made about a hundred units before transitioning into full snowmobiles, so this is one rare pickup.

It’s always easy to figure out if you’re seeing an authentic 1938 Dodge RC. This is the last model to use the “Dodge Brothers” radiator badge. This is also the last before the “art deco” motif that would take hold for Dodge in the 1940s.

Many were sold bare and then had various additions placed by dealers, including extra wheels, chrome headlights, and radiator shells. The six-cylinder engine could get up to 75 hp. This may have been the last of its pickup line, but it went out in style.

Stewart had been making minor headway in the truck business as the Great Depression wore on. Seeing a low market, Stewart stepped up with a half-ton line called the Buddy. Their panel trucks were a precursor to the delivery vans of today yet notable for how they fit into pickup status.

The Waukesha L-head six had excellent power to handle long hauls at reasonable speeds, and some trucks could have the paneling be removed. Sadly, it didn’t last long, yet Stewart may have been onto something with these trucks.

Today’s Macks are known for their huge sizes. So it’s easy to overlook the Jr. Despite its title, this was a pretty sizable truck, coming in at close to 14,500 pounds. It had either two or four-cylinder engines for low hp, which didn’t help it win over folks on long hauls.

In fact, less than five thousand were built over two years before it was discontinued to make it a blip on the Mack history books.

The “Woody” style of cars was picking up steam in the 1930s. Before they were used for wagons, the Chevrolet JC had an excellent style to it. This year saw the Woody trucks have a larger wheelbase and improved engine to handle the extra power.

The weight was impressive, which slowed it down, yet that wooden frame helped it feel lighter. The Woody Suburbans didn’t last long to make this a notable vehicle.

With the 1920s coming to a close, Ford decided it was time to move on from the Model T. The Model A retained the same style but built on a ladder chassis with mechanical brakes.

The engine was the highlight, 200 cubic inch L-head, 40hp inline-four with three-speed transmission. Combined with an electric battery, this was the next step in pickups to push Ford up the ranks.

The first major arm of General Motors, GMC experimented with trucks that would become quite popular over the years. The K-16 was an updated version of an older vehicle with a closed bed, and it was often used as a fire truck.

This version also works as a pickup even if the four-cylinder gas engine has meager horsepower and handling. Still, it nicely shows the early power of GMC at work.

Studebaker had been finding success in the ‘30s with those unique rides of theirs. The Coupe Express J5 boasted that unique art deco look Studebaker was famous for with the sloped curves based on the popular (if poorly named) Dictator line.

The engine was a bit weaker than others but could still provide power, and the wing windows were great in the days before A/C. Throw in how the front and rear fenders were interchangeable, and this was a decent pickup whose production was ruined by the advent of WWII.

Usually, Willys brings to mind the iconic jeeps. They were known for their post-WWII vehicles, but the company had produced a pickup before the War. They boasted the same “Go Devil” engine and 3-speed Borg-Warner T-90 manual transmission as the jeeps.

The truck may not have been much in speed but could carry over a ton, which was impressive for its time. WWII curtailed its production, but this showed Willys could do more than just jeeps.

A forgotten gem of early Chevrolet, the BB Huckster was showcased in the early 1930s. Powered by a 194ci Stovebolt Inline 6 Engine that’s paired with a Carter 1 Barrel Carburetor, the Huckster was a fast truck capable of decent hauling.

The wide frame helps with the performance, although the sheet metal does weigh it down a bit. While it wasn’t a huge seller, the Huckster is an excellent vintage pickup to come across at auctions.

Related: 8 Classic Pickup Trucks That Cost A Fortune (& 7 That Cost Nothing)

Despite being one of the more popular pickups of its time, the Plymouth PT-50 appears to have drifted into history. The fact that Plymouth was never known for trucks at all should make this even more notable. The L-head six-cylinder produced 70 hp and married to a very sturdy frame.

What kept it from truly taking off was its high cost and then the advent of WWII making cheaper pickups more popular. Plymouth almost never got into the pickup game again, so the PT-50 is a rare find.

This is historic as the last truck by Graham Brothers before they fully merged with Dodge. This has an exquisite style to it, mixing a little originality with the usual Dodge touches.

The 208-cu.in. L-head six-cylinder engines could produce almost 30 hp, and the three-speed floor shift handled the frame well. While the bed space may seem low, the Graham did show the potential the company may have had in great trucks before they went under.

By the 1930s, the pickup truck was gaining popularity, yet models still linked to the past. Dodge Brothers put a spin on it with the KC model. It stands out with its flatbed and looks more like a regular car than a traditional pickup.

The L-head six-cylinder engine displaced 201.3 cubic-inches and produced 70 horsepower with a three-speed transmission. It’s a great precursor to the trucks Dodge would become famous for in later years.

It seems amazing how many people forget the Ford TT, which paved the way for every pickup scene. The fact is that all Ford did was bolt a large frame to the typical Model T. They only sold 209 units in their first year, with many wondering what the point of it was.

The 1924 version upped the power with a heavier-duty frame and longer wheelbase. The engine can get nearly 30 mph and the hauling power better to show a truck that was a groundbreaker for the industry.

Related: The 5 Cheapest Classic Pickup Trucks (& The 10 Most Expensive)

Despite its name, International Harvester was actually located in Illinois and the basis of what is now Navistar. The International model trucks were produced in the ‘20s with the SPD one of the better models.

The “Six-Speed Special” lived up to its name with a transmission rare for its time. The Waukesha XA L-head 4-cylinder could get 30 hp, which was underpowered for its frame. The SPD was replaced by better engines in the ‘30s for a decent pickup.

There are several classic variations of the Model T, but this one stands out. The Depot Hack takes its name from how trains were the critical method of travel in 1923.

This car was meant to take passengers and luggage to the stations and to hotels, thus the “hack” part. The 176 cubic inch, four-cylinder engine could gain 20 hp as this truck was the Uber ride of its day.

Durant had been a successful company in the 1920s who were joining in the push for wooden trucks and wagons. The Star Woodie took a large wooden wagon box and bolted it to the typical Durant frames.

The four-cylinder engine was weak for the time, but it wasn’t bad for the back space. While it’s often listed as a “wagon”, its wide-open bed is more like a modern pickup. The line didn’t last long yet stands up as a decent ride.

It’s obvious how this got the nickname of “The Big Boy.” Needing to stay in business after the Great Depression, Hudson tried their hand at this fancy car. The six-cylinder engine could get 70 hp and some great interiors (including a clock, which was rare for cars back then).

The vehicle got a substantial promotional push (Amelia Earhart even promoted it), but it never became a big seller and was eventually phased out. Yet its size and style help it stand out amid classic pickup trucks.

Usually, Mack trucks are remembered for being big and noisy. Yet just before WWII, the company was experimenting with some lighter vehicles boasting unique stats. The ED began production in 1936 and lasted until 1944.

They were never huge sellers, with only 2,686 models sold between those years. The straight-six, 209 cubic-inch, Continental engine rated at 67 horsepower was good, but the handling was awful and could barely take a ton in weight. Little wonder Mack dropped this fast.

Usually, when an REO Speed Wagon is mentioned, people think of the band. But the reality is that the original Speed Wagon was an early attempt at a pickup truck. While some models were created around 1917, the ‘20s had them being produced in more significant numbers.

The 1925 model was the first with a six-cylinder engine while the ‘29 version had the Gold Crown” 268 cubic inch, 67 horsepower, six-cylinder engine. The 1933 Model BN is the rarest of the bunch with that engine and parts from the Flying Cloud and Royale luxury cars. Production stopped in the ‘50s, but the Speed Wagon should be remembered.

Next: Legacy Classic Trucks: Everything You Need To Know

Long-time writer online with love for movies, TV, comics, cars, video games and a mix of all of the above.