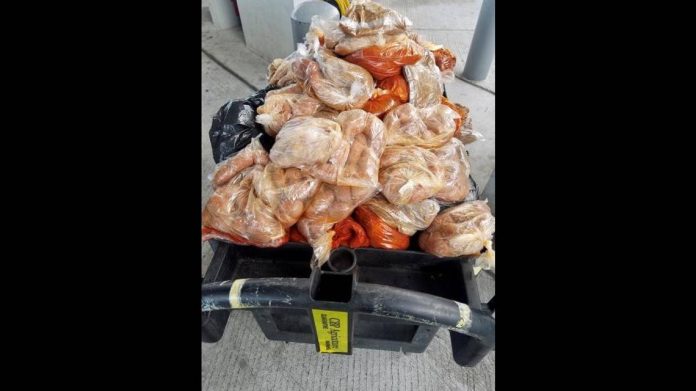 Border officials said they found an unexpected kind of contraband under the hood of an old pickup truck: more than 200 pounds of illegal pork.

The 30-year-old U.S. citizen was driving from Mexico last week when the car was stopped at the Juarez-Lincoln International Bridge, CBP said.

“The vehicle was sent in for a non-intrusive inspection when the driver was unable to open the hood,” CBP said in a news release. “Following an agriculture canine and non-intrusive imaging system examination, CBP officers and agriculture specialists discovered a total of 201 pounds of undeclared and prohibited pork products concealed in the engine compartment.”

The man was issued a $1,000 civil penalty for “the undeclared commercial quantity of the prohibited product” and could be fined up to $1,000 more, CBP said.

“At this time, Mexico is considered free of Classical Swine Fever (CSF) but pork importations need to meet special requirements,” CBP said. “Attempting to bring in prohibited agricultural items could lead to traveler delays and may result in a fine ranging from $300 to $1,000.”