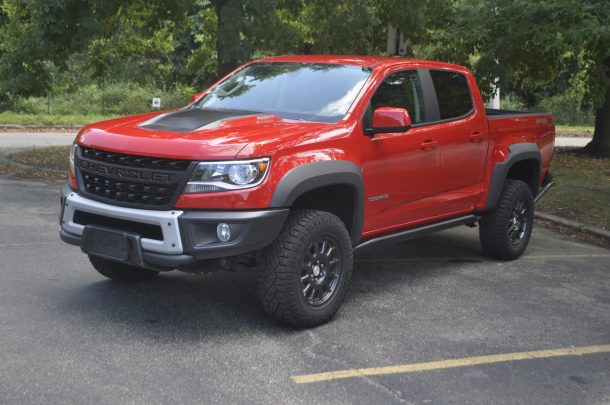 On paper, a midsize truck with a diesel powertrain and bad-ass off-road gear sounds like a recipe for fun.

And based on our first drive of the Chevrolet Colorado ZR2 Bison, it is – provided you actually get an opportunity to leave the pavement behind.

On road, however, in an urban environment — well, you get a truck that’s not much fun at all.

The 2.8-liter turbocharged four-cylinder diesel engine is torquey – 369 lb-ft, to go along with 186 horsepower – but that torque doesn’t translate into swift acceleration in this package. A six-speed automatic transmission is the gearbox on offer.

At least the off-road tires don’t screw with ride too much. I noted this on my first drive and it held true later – the Bison’s off-road mission doesn’t make it a chore to drive around the city. It’s pokey but otherwise not a pain.

Like I said previously, the Bison’s biggest flaw isn’t its on-road ride. Nor is it off-road capability – I saw on that first drive just how well the Bison could perform, even seven miles deep in the desert. Nah, the flaw here is something that GM needs to fix NOW in all its trucks, from the cheapest Colorado to the most expensive GMC Sierra Denali. It’s the cabin – which is way behind the times.

It’s true that Toyota Tacoma interiors look a bit dated, too, and the Ranger’s interior isn’t exactly awe-inspiring, either, but the Colorado’s cabin feels so far behind the times it might as well be wearing Zoobaz unironically. Chevy asks a lot of dough for this truck, and while that’s in large part because of its off-road specs, one would like nicer switchgear and materials at this price point.

This truck even has an old-fashioned key, fer cripes’ sake (although for some people, that’s not a complaint).

It’s not all bad inside – I appreciate large control knobs, and the infotaiment system isn’t bad in and of itself. The problems here are the small size of the infotainment screen and a lack of overall pizzazz. That makes the interior feel more dated than any one element. It’s not so much that the Colorado lacks the buttons we expect in modern trucks, it’s that Chevy went for a simplistic look but didn’t bother to make it sleek. Simplistic is good, but it’s better with at least a dash of creativity. Chevy just seems to have let function lead the way, without even considering form.

It’s fine for form to follow function, to borrow an old ad tag line, but form can’t just be an afterthought.

Especially in a truck that rings the register furiously. Just to start with the Colorado ZR2 crew-cab short box platform, you’re dropping $42,900. Add $3,500 for the diesel (which does have an exhaust brake), and you’re in the mid $40Ks.

Of course, the ZR2 base package also provides off-road goodies such as fully locking front and rear differentials, a trailer brake, all-terrain tires, a towing package, and protection for the rockers. The rear-axle ratio is 3.42:1.

The truck also gets a 2-inch lift, while the front and rear tracks both widen by 3.5 inches. Other standard and available features that have nothing to do with off-roading include Android Auto, Apple CarPlay, satellite radio, in-car Wi-Fi, heated front seats, heated steering wheel, multiple USB ports, and wireless cell-phone charging.

Another way in which the Colorado is a bit behind the times is that it lacks most of the driver-aid tech that’s now common in the industry. Then again, that’s a good thing in the eyes of some customers, who prefer things to be old-school.

Still, this is a $53K truck that doesn’t offer modern tech. That will be a hard sell for some.

Some will appreciate the Colorado for its throwback simplicity. Some will be bothered by its lack of new tech and aging cabin. Others won’t care because of what it can do off-pavement.

That last bit may be the key. For what it can’t do on road, the Bison more than makes up for it on the trail, sleek design be damned.

Mitsubishi pickup truck found burned out after fire in Radcliffe