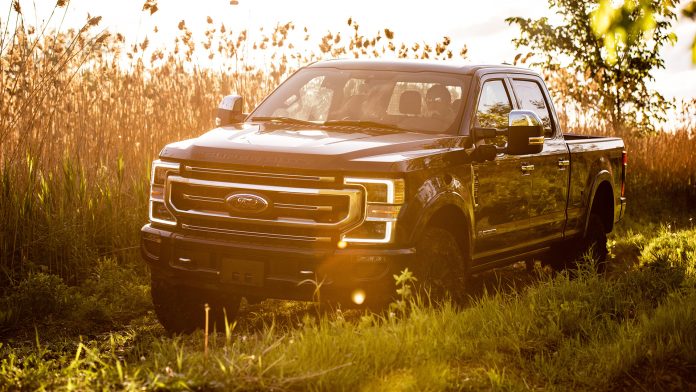 The trail I had found for my test was a heavily beaten maintenance road used to access and/or fix high-tension power lines. During a typical humid spring, the area floods, causing man-deep puddles, severe ground deformations, steep rocky inclines and of course, a shit-ton of mud. Suffice it to say it was the ideal scenario for the vehicle at hand. Except this year, we’ve been experiencing dryer than usual conditions here in Quebec, so my trail wasn’t as mucky as I had anticipated it to be.

Nevertheless, the experience did allow me to fiddle with the Tremor’s go-everywhere toys. Four-wheel-drive gets activated by way of a small knob located on the right of the steering wheel. It’s also where you alternate between low and high gears, as well as lock the rear differential by pulling on the knob itself. The only thing this system lacks is an “auto” feature which lets the all-wheel-drive system do its thing in the background automatically. That would have been nice, especially considering GM and Ram both offer it.

Then there are the drive modes, which allow you to navigate between Towing, Slippery, Deep Sand, Snow and Rock Crawling, as well as the comical Eco mode. All modes considerably change the traction control and the transmission’s behavior.

The F-250 Tremor basically ate up that trail, which was an indication of just how capable it is. The Tremor’s suspension feels sturdy and articulates wonderfully over large gaps, but it’s still not as spectacular as the setup Ram has patented. Ram actually injected Jeep Wrangler wizardry in its truck, allowing it to disconnect its sway bars for ultimate freedom of movement. No other pickup truck currently does that.

But the Tremor’s tires grip effortlessly on rocky surfaces, while the ten-speed gearbox fantastically adapts to the various drive modes. It just always finds the right gear for the task, allowing this king-sized apparatus to smoothly ease its way out of the deepest crevasses no sweat. It’s all very impressive.

As the truck sank its front axle into the next puddle, I was luxuriating in the F-250 Platinum’s immeasurably spacious, quiet, and fine interior. My truck had the exquisite Kingsville Dark Marsala leather surfaces, complete with massaging and cooling seats, a panoramic roof and a 10-speaker, 1,000-watt Bang & Olufsen sound system.

As impressive as it all is though, the Super Duty’s cabin is ironically starting to show age; with GMC’s own woes on that front, Ram still wins this round hands down. This is especially apparent when you spot some shady cabin materials, hard plastics, and a Sync 2 infotainment system (Ford is now moving onto Sync 3) that feels slow compared to the newer stuff currently on sale. Furthermore, the system can also only be had with an eight-inch screen, while Ram offers the possibility of a large, 12-inch, Tesla-like tablet.

Is It Easy To Live With?

Of course, driving a lifted 20-foot long truck around town comes with its share of challenges. Luckily, the F-250’s numerous camera systems and sensors make parallel parking rather easy, although I was quickly irritated by the fact that they only automatically engage in reverse. You need to manually tap a button if you want to see what’s happening up front while inching forward.

Once on the road, the Power Stroke’s colossal torque means it vigorously launches the truck forward the moment you feather the throttle. Turbo lag, an inevitable turbodiesel flaw, is noticeably less present here than with the competition. Power comes on strong and remains steady as the brute steadily picks up speed, emitting snorting and whistling sounds as its gargantuan turbocharger shoves compressed air into the engine’s massive combustion chambers.

I was also pleased with how well the 10-speed transmission goes about its business. I’ve driven this in other Ford or GM applications, and I’ve complained about it lagging in the Mustang or even in the Expedition, but here, the software calibration is by far the best I’ve experienced. Ford put a cool little cluster in the gauge pod that allows you to see in which gear you’re in; take off from a stoplight, and barely 40 feet away the truck’s already shifting into fifth. It’s all so seamless and non-dramatic that you often wonder if there’s even a transmission in there at all.

Memories of growing up Italian in St. Patrick’s Ward (11 photos)

Germany Arrests 4 IS Suspects Planning Attack on US Bases