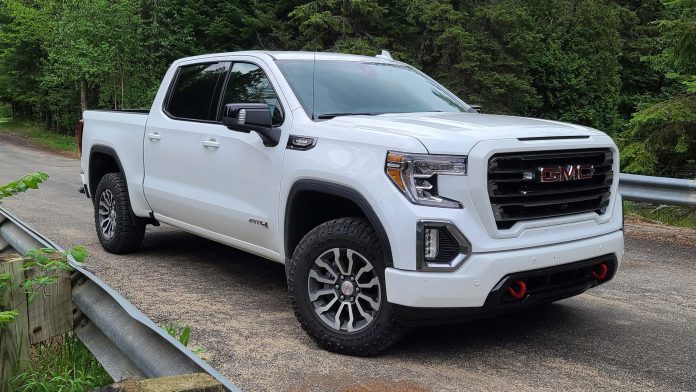 That’s the way I feel about pickups.

As a speed-addled sports car guy, hulking pickups are low on my list of performance vehicles. But when you need a tool to get things done, there is no substitute for a truck, as I found out when I escaped to northern Michigan recently in a 2020 GMC Sierra AT4.

As regular readers of this column know, performance cars have been my refuge during the shutdown: Cadillac CT5 V-Sport, Mazda Miata, Tesla Model 3, Alfa Romeo Giulia Quadrifoglio, BMW M8. These stallions took me away to Hell, Michigan and Woodward Avenue and the Huron River where I could social-distance at speed.

The 2020 GMC Sierra AT4 is made in America. In Fort Wayne, Indiana to be exact. (Photo: Henry Payne, The Detroit News)

Heading north, I thought it would be great to exercise a sports car as well. I wanted to flog it over the roller-coaster hills of Antrim County on M-32. Or up the Lake Michigan coast through the Tunnel of Trees on twisty Route 119.

But when it came time to leave, the only thing in my driveway was … a truck. It would turn out to be an inspired choice. There would be lots of nails that needed a hammer.

While southeast Michigan remained on lockdown, our benevolent Tsar Whitmer decided to open up north for business May 19. Apparently her husband wanted to go boating at their second home. We set course for our family’s summer domicile as well.

The interior of the 2020 GMC Sierra AT4 is comfortable and ergonomically useful — but it lags competitors like the Ram 1500. (Photo: Henry Payne, The Detroit News)

Like a kind of mechanical centaur, pickups are half wheelbarrow, half auto. Travel with a family and the wheelbarrow half is useless — where does the luggage go? My recommendation: Buy a tonneau cover so you can use the bed for cargo when needed. Only Mrs. Payne and I would make this journey, so the Sierra crew cab’s enormous rear seat was enough for our bags — and coolers, blankets, athletic bags, beverages and everything else you want on the lakes.

Recognizing the wheelbarrow’s shortcomings, pickups have become ingenious about creating internal cargo space (my favorite is Ram trucks’ “basement” compartments under the second-row floor). But the Sierra (and cousin Chevy Silverado) have their own hidden compartment — behind the backseat. What’s next? A spinning door to a secret room?

This cleverness continues up front where the Sierra boasts twin glove compartments, center console storage deeper than the Mariana Trench — there’s even a storage bin on top of the dash.

GM has been shamed for its uninspired interior design compared to, say, the Ram 1500. For example, where Ram uses a compact rotary gear-selector, Sierra sticks to an old-fashioned, steering-column shifter. Nice for space-saving — but, compare Sierra’s stalk to modern variants found in a Tesla or Mercedes GLE, and the pickup seems oh-so-15-years-ago.

The 2020 GMC Sierra AT4 features hidden storage for clothes or a laptop behind the rear seats. (Photo: Henry Payne, The Detroit News)

The interior blah is especially notable because the GMC’s exterior is typically awesome. Sculpted bod. Strong shoulders. Chrome grille. The AT4 got a lot of looks.

The accolades just fell out of people’s mouths. Sierra is also the sports car of trucks. With its best-in-class chassis light-weighting, I’ve enjoyed pushing GMCs through the twisties since the first 2016 Sierra Denali I drove with a Corvette-shared 6.2-liter V-8 under the hood.

My 2020 Sierra was outfitted with a 3.0-liter turbo-diesel inline-6, but it provided plenty of giddyap — particularly its low end, 460-pound feet of torque. I had some fun through the Route 32 curves before my wife got tired of swinging from the A-pillar grab handle.

We arrived at our Charlevoix family cottage and there were plenty of nails needing a hammer after a long winter away. Like bicycles.

We share the cottage with family and eight bicycles were strewn about the garage, six in various stages of disrepair: flat tires, seized wheels, rotted seats.

We called the local Revolution Bike Shop who told us to bring them over. No problem, we had a pickup. Bike capacity: six.

I know it’s six because we stacked every last one into the GMC’s rear bed. Side-by-side. Try that in a sports sedan.

The loading was made easier by GMC’s six-function Multi-Pro tailgate. You know it from its jaw-dropping TV ads. Sports car motorheads like to wow friends by lifting the hood. I wowed neighbors with the Sierra tailgate. Push the button and …

2. A loadstop bar keeps boards from falling out the back.

4. Drop the loadstop and you have a work surface — or bar.

5. Drop the inner gate to “walk in” to the tailgate and create a standing desk.

6. Drop a step that makes stairs into the bed

I used that last feature to walk the bikes into the bed — a task that would otherwise require two people.

It wasn’t just bike shops opening up north. Swiss Hideaway Canoe Rental was open for trips down the Jordan River — but with a catch. Due to social-distancing regulations, they couldn’t pick us (and canoes) up in their vans at the end of the journey.

“We’ll rent you the canoes at a discount if you can bring them back yourself,” they said.

No problem. We had a pickup.

We dropped the Sierra at the East Jordan pick-up point — then piled into my son’s rental car (he and his gal pal had flown in from Seattle) to drive to the put-in spot. After our two-hour canoe trip, we loaded the canoes into the pickup for the ride back to Swiss Hideaway.

The Multi-Pro tailgate proved its worth here, too, as the “walk-in” feature allowed me to better tie down the canoes. Meanwhile, my son used the GMC’s corner bumper steps (why aren’t all truck equipped with these?) to jump in and out of the bed around the canoes.

Up north is pickup country. Far from urban Detroit where vehicles are used for commuting to tight parking garages, big trucks have more room to maneuver. The Sierra AT4 is also lifted two inches to explore irregular terrain.

The 2020 GMC Sierra AT4 can be pricey at $83,000, but it comes loaded with content including diesel engine, 2-inch lift for off-roading and the Multipro tailgate. (Photo: Henry Payne, The Detroit News)

Henry Payne is auto critic for The Detroit News. Find him at hpayne@detroitnews.com or Twitter @HenryEPayne.

Aaron ‘Jay’ Danielson had tracked Portland protests. He was near home...

Troubleshooter: Does your pickup really need a bed cap?