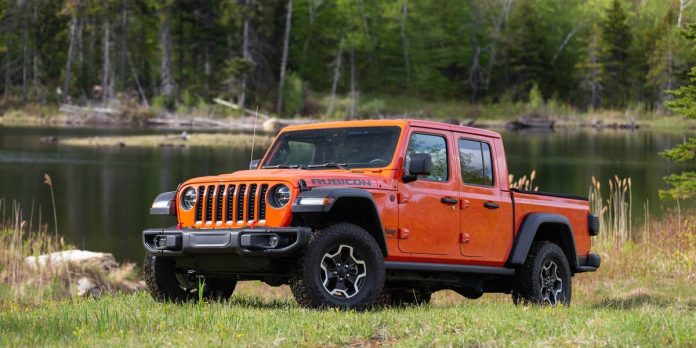 When the nice media fleet people kindly dropped the 2020 Jeep Gladiator off in front of my Brooklyn apartment, I had to laugh. Contrasted sharply against the gray concrete and the similarly gray cars typically parked here, the orange Jeep was garish, lurid, and rude. A punchline straight to the eyes.

But it wasn’t just the color. There was presence. The Gladiator stands tall; it has beefy, all-terrain tires. Swaths of blocky, black trim. Squared-off fenders that stick out inches from the body. A design composed of straight lines and right angles.

The good news is that the Jeep Gladiator’s look will likely age well; straight lines and 90-degree angles don’t exactly go out of fashion.

The 2020 Jeep Gladiator: Jeep went wild on the optional features

In fact, if you were to eye it straight in the familiar seven-slot grille-face, you wouldn’t be able to tell there’s a pickup bed attached back there at all. From the side, too, its front half is a Jeep Wrangler. Its back half is a rectangle.

Show me the person who would realistically option their Gladiator in such a fashion, because I cannot imagine them. $62,000 is a lot of money for a midsize pickup! The options Jeep gave its press car were appreciated, but they didn’t really add or detract from the truck’s primary job, which is being a truck.

Details and safety ratings: Built for off-roading, but not for fuel economy

Powered by a 3.6-liter Pentastar V6 engine, the Gladiator makes a claimed 285 horsepower and 260 pound-feet of torque. A six-speed manual comes standard, but an eight-speed automatic is optional.

The engine is designed to produce low-range torque — meaning that it’s best-suited for low speeds and while doing low-speed things, such as off-roading, driving during harsh conditions, hauling cargo, or towing something.

But it also means that the Gladiator was designed from the ground up as something intended for off-roading and transporting heavy loads. Body-on-frame vehicles are generally cheaper to build, too.

Rubicon-trim Gladiators also wear a Jeep Trail Rated badge, which means that they have added ground clearance, big tires, 30 inches of water fording ability, and up to 7,650 pounds of towing capacity.

Although the National Highway Traffic Safety Administration has not yet given the 2020 Gladiator an overall safety rating, it did award the truck four out of five stars for overall frontal crashworthiness. The front driver side earned four stars, while the front passenger side earned five stars. Side crash hasn’t been rated, but rollover scored a mere three stars. The agency reported a 26.7% risk of rollover.

What stands out: The thing is a god in its off-roading element

Despite its fearsome and rugged looks, the Gladiator is actually a comfortable place to spend a few hours during long commutes. There’s abundant room in the cabin for four passengers, and even the rear seats are roomy. Plenty of headroom and legroom.

The bed, for us, hauled two suitcases, two backpacks, bags of groceries, electronics, a purse, a laundry hamper, and two large director’s chairs. Jeep provided a tonneau cover and that came in very handy, as it kept all of our stuff dry.

Some light off-roading later, it was clear to me the big Jeep was in its element. Trundling up and down grassy knolls and through the woods, the Gladiator happily bumped, tilted, and thumped across the uneven terrain, always solidly planted.

The off-roading suspension drank in the turbulence — not so much soaking it up completely so that you, the driver, would be numb to it — but rather in a way that was pliable and inspired confidence.

Driving the truck across this sort of environment was akin to sitting astride a very sure-footed, four-legged animal. Sure, I wouldn’t recommend doing it with an open mug of coffee in your hand, but all four wheels consistently felt they were working together, cohesively, under me.

That feeling was a direct result of the truck’s four-wheel drive and locking differentials — which allows both wheels on an axle to travel at the same speed so when one wheel loses traction, both keep spinning and hopefully will pull you out of the low-traction situation.

The 11.1 inches of ground clearance also meant that the Gladiator could crawl over a great number of things in its way. The trunk of a fallen birch tree, for example, would have torn off the front bumper of (and caused significant damage to) your average crossover or SUV, but the truck stepped right over the obstacle and thought nothing of it.

What falls short: Not a happy highway camper

The saying, “jack of all trades, master of none” unfortunately rings extremely true here. As stoked as the Gladiator clearly is while splashing about in muck or sand, it doesn’t do the highway cruising with nearly as much gumption.

Don’t get me wrong; the Gladiator is a very fine around-town commuter, great for running errands. You sit high and can easily see around and over other cars — a very big deal for a short person such as myself.

But once you hit the highway, that confidence and sure-footedness from the low-speed off-roading all but evaporates. The bouncy suspension, so well optimized for uncivilized terrain, feeds some unwelcome wobbliness into the cabin. The big, all-terrain tires hum loudly at high speed.

The Jeep also didn’t like maintaining highway speeds. Other cars merely require periodic throttle inputs to keep up consistent speeds of about 65 mph or so; pretty effortless and thoughtless stuff. The Gladiator felt as though it was constantly driving through molasses that kept dragging its speed down. Eventually, I gave up trying to hold to a constant speed by myself and instead switched on the cruise control.

And thanks to the approximate aerodynamics of a brick, I observed the Gladiator to return an average of 19.2 mpg during the course of my loan, which included city driving, highway driving, and around-town errand running. On the truck’s window sticker, the EPA gives the Gladiator a fuel economy and greenhouse-gas rating of three out of 10.

Hardware wise, I do wish the wing mirrors stuck out a bit further. The Gladiator is a long vehicle and it isn’t always easy to see where it ends. It has thick C-pillars, which result in blind spots during over-the-shoulder glances. Wing mirrors with a wider field of view would have been helpful there.

How the Gladiator compares to its competitors: A bit more expensive, and a bit more uncouth

Certainly, other trucks are likely more comfortable and civilized than the rather uncouth Gladiator. That’s the new truck trend these days: SUV-like quality and comfort, but with a bed for all your stuff.

But if you want a truck where you can pull its doors off, a truck that revels in getting muddy from playtime and going where there are no roads, the Gladiator is for you. It’ll do the suburban life just fine, but you can tell its heart is elsewhere.

Our impressions: Maybe if I didn’t live in Brooklyn

Perhaps this is a uniquely Me Problem, but I actually felt too short for the Gladiator. At five-foot-three, I was disappointed by the truck’s lack of running boards (don’t worry, you can get them as an option). It took several days for me to get used to the massive step up I had to take to climb into the cabin. Twice, while exiting backward, I misjudged the distance from the truck to the ground and nearly fell out of it.

Thankfully, the Jeep has handles at the A- and B-pillars that passengers can use to pull themselves up, but this crutch falls apart when you approach the truck with items in both hands, such as a phone, car keys, and a beverage. Even if you manage to open the door with one finger, you’ll still need to first reach into the truck to put everything down before grabbing the handle to hoist yourself in. It’s an extra step.

The lofty ground clearance — so great for fallen trees and the like! — also means that the bed is quite high up. Maybe you’re tall enough that you can just reach in from the side to retrieve your items. To that end, I am ecstatic for you. I had to physically climb into the bed and push everything toward the tailgate before I could remove it.

Despite these small inconveniences, though, I liked the Gladiator. I appreciate its existence. I respect its off-road capabilities and how stable it always felt. If I lived in the desert, preferably somewhere in the American Southwest, I’d definitely consider one. But as it currently stands, I live in Brooklyn, and in Brooklyn, the Jeep pickup truck simply feels too big to be allowed.

That being said, I have a hard time figuring out who the Gladiator is actually for. You’d think, given the popularity of midsize trucks, they would sell more quickly than Jeep could make them. It certainly seems like the automaker was betting on this very thing to happen. But it didn’t.

The Gladiator went on sale during the second half of 2019. Yet, the Compass, Wrangler, Cherokee, Grand Cherokee, and even the Renegade sold better than it did in Q4. I remember automotive readers being very excited about the Gladiator. But it doesn’t seem like many people bought them.

Perhaps it’s because the Gladiator markets itself a little bit too much to the niche truck buyer. The higher price tag certainly suggests that. This truck appeals to the buyer who probably wouldn’t use their Gladiator as a work tool, but rather as a recreational vehicle. A playtime buggy. A toy.

Look no further than Jeep’s own press images of the truck, which feature it prominently at play (or doing play-adjacent activities): fording creeks, going to the beach, rock crawling, hauling a boat, and transporting kayaks and dirt bikes. This is the truck you load up with camping equipment to get to that far-out campsite that’s inaccessible to everything except lifted Jeeps and donkeys.

It’s not a bad territory to occupy, even if a little niche.