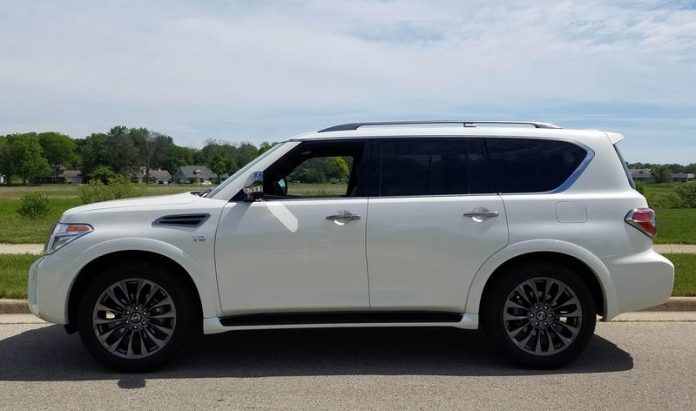 In some ways you’d think Nissan would own the large SUV market.

Its small Rogue is extremely popular as is its mid-size SUV, the Pathfinder. Consider too that Nissan’s large SUV boasts the most power in its class and is one of the lower priced big people haulers on the market.

But, when I mention the Nissan Armada, do you think of a top-tier large SUV?

Probably not, you likely think of Chevy and GMC’s Suburban or Tahoe/Yukon, maybe Ford’s Explorer or even Toyota’s hefty Land Cruiser. But that’s not Armada’s fault. It’s not because Armada isn’t strong, capable, and big enough to snag your attention. It’s probably because you don’t hear much about it, yet it has been around for 17 model years.

Originally it was based on the strong Nissan Titan pickup, but it has evolved into a much more luxurious and refined full-size ute, a kissin’ cousin to Infiniti’s QX80.

So how big and capable is it?

It’ll tow 8,500 pounds, and some sources claim up to 9,000 pounds. Much of that is thanks to its powerful Endurance V8, a 5.6-liter beast that creates 390 horsepower and a torque rating of 394. Compare that to the competition and you’ll see Nissan is the muscle-bound middle linebacker of SUVs.

I mean look at this thing. It looks massive and muscular, not sleek and sexy.

Naturally that size means there’s a third-row seat so you could haul eight folks along with a trailer and a family’s worth of gear. Even with the third-row seats in place there’s 16.5 cubic feet of cargo room, about the same as a large sedan’s trunk. If you don’t need that third row the space grows to 49.9 cu. ft. and with both rear rows reclined Armada holds a cavernous 95.4 cu.ft. worth of stuff and things.

But like its main competitors, those other brands you pictured when I said full-size or big SUV, Armada doesn’t look or feel like a work truck. It’s fairly quiet and luxurious inside. The tested white Platinum version with the Platinum Reserve package giving it some exterior and interior perks for $2,250 that looked high-end.

The package not only provides dark chrome trim outside (grille, door handles, mirrors), it spiffs the interior with two-tone brown leather seats, dash and door trim. This looks rich and feels it too with a soft sensuous surface. Plus, for $450 there are captain’s chairs in the second row, which allows only seven passengers to fit in this model but means the first two rows of folks travel in style and comfort. Third row room is a bit snug.

Seats are fairly flat with only a bit of lower back and hip support. Yet the flat seats are wide, comfortable and easy to slip in and out of. Front row seats are powered, plus heated and cooled while rear outboard seats are heated. There are running boards to help us shorter drivers crawl aboard too, and the third row seats will power down nearly flat. Buttons to drop the seats are inside the power rear hatch. But be forewarned that lowering the seats isn’t quick.

Naturally there are all the usual standard safety features such as automatic braking, blind-spot warning, backup intervention, lane departure, smart cruise control, and such. All work fine and the 360-view camera is a help, especially because as with most big utes, the A-pillar/side mirror design is thick and can obstruct side views at some angles.

More interior perks include the power sunroof, a well laid out dash with good dash knobs and buttons (a lot of them), and a rear-seat entertainment system to amuse kids and teens on a long road trip. Wireless headphones are standard as are screens in the headrests of the two front seats.

On the console is a knob for putting the 4WD system in high or low depending on how deep the muck is you’re traversing off road. One problem though, that chrome and black gloss console becomes extremely reflective on sunny days. That can be a major distraction to a driver.

I know I didn’t mention the drive and ride quality earlier here, because it’s much like that found in other large SUVs. Ride can be a bit bouncy as these are big trucks. On the highway though the Armada is smooth sailing. In town you feel the potholes, yet cushioning from the suspension doesn’t allow it to shock you too much.

Note too, the test truck added 22-inch wheels and tires for $2,250. They look great, but I’d save the cash as they actually make for a harsher ride.

Handling is fine for a big truck, but it’s Armada’s power that stands out, and 4WD comes on this model.

All the Armada’s weight and strength bring down the gas mileage rating to what some would call pathetic. The EPA rates the truck at 13 mpg city and 18 mpg highway. I got just 13.5 mpg in about 70% city driving. Remember, SUVs don’t have gas guzzler taxes, so that poor mileage only costs you at the pump, no $1,000 tax.

One last thing on pricing. Since when is white a premium color? This model’s bright white exterior added $395 to the price. That’s not a lot when you’re paying north of $70,000, but really, white costs extra?

Editor’s note: Mark Savage’s auto review column, Savage On Wheels, looks at a new vehicle every week and tells consumers what’s good, what’s not so good, and how the vehicle fits into the marketplace.

New Ford F-150 is expected to come equipped with a sleeper...