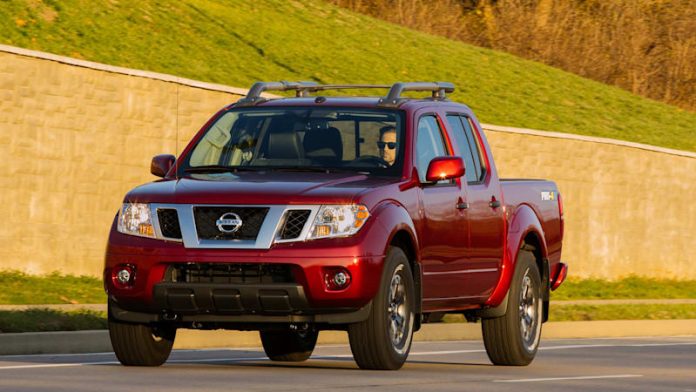 The 2020 Nissan Frontier marks the last in a particularly lengthy pickup truck generation that dates all the way back to the 2005 model year. Next year we’ll get a completely redesigned model, but before that happens, Nissan is giving the old truck one last “hurrah” with a taste of the new one in the form of a fresh V6 engine and nine-speed automatic transmission, the only choices for this year. And the new combo is a mighty good sign of things to come.

Just on paper, the engine and transmission make strong cases for themselves. The 3.8-liter V8 makes 310 horsepower, which is 49 more than the old 4.0-liter and 158 more than the discontinued four-cylinder base engine. Its 310 horses also make it the most powerful midsize truck in the segment. Its 281 pound-feet of torque is unchanged, but that’s still more than what you get from the V6s in the Chevy Colorado or Toyota Tacoma. Only the diesel Colorado and the Ford Ranger’s turbo four-cylinder top the Nissan’s torque rating. Combined fuel economy of 20 mpg with RWD and 19 mpg with 4WD improves upon its 4.0-liter predecessor by 1 and 2 mpg, respectively. Credit goes to the lighter more efficient engine and the additional gear ratios, however, fuel economy is still dead last in the segment among similar automatic V6 RWD trucks. The 4WD ties the V6 Gladiator and Colorado, and tops the Colorado ZR2 with a V6. Odds are the next-generation truck will improve this further.

The Frontier’s engine and trans also impress in the real world. The V6 is responsive, and the extra power is noticeable, letting the Frontier accelerate comfortably and quickly. Power is strong throughout the rev band, and it doesn’t sound strained when winding up to redline. In fact, the engine is fairly smooth and muted across the board. That’s not to say it sounds good either, giving off a muffled drone, but it’s unobtrusive. For those who hate automatic start-stop systems, you may be relieved to hear this Frontier lacks such a feature, though that’s also likely one of the contributors to its below-average fuel economy.

The transmission is arguably even better than the new engine. It manages its many speeds with aplomb, decisively picking the right gear and never having to double downshift to find the right one whenever you jab the throttle. It never seems to shift too early or too late, either. Keep the throttle pinned and it will hold a gear practically to redline; ease off and it’ll start working its way through the other gears until it settles at one with a low rpm. Each shift is silky, too. It can be a little slow on the shift, but that’s the case with every truck in this segment.

So the new powertrain is great, but what about the rest of the truck? Well, to quote the Talking Heads, it’s basically the same as it ever was both inside and out. In some ways that’s good. The Frontier is still a genuinely small vehicle compared with newer pickups, making it easy to maneuver. It has superb visibility thanks to a high seating position, low dash and window sills and lots of glass area. The Frontier’s chassis is still stiff, and even our test Pro-4X with its off-road-tweaked suspension had a compliant ride. Steering is slow but has solid feedback.

In other ways, the age is an issue. The interior looks just as dated as you’d expect from something barely changed since 2005. Its hard, shiny plastics are rugged, but make the truck feel especially chintzy. There isn’t much in the way of comfort, convenience or safety features. Only this year have power windows, locks and a tilting steering wheel become standard. A telescoping wheel is still missing. The infotainment screen is old and low-resolution, and there’s no form of Apple CarPlay or Android Auto for mirroring your phone. At least USB and Bluetooth connectivity is quick and easy. The instrument panel has little information beyond the main dials for revs, speed, fuel and coolant temperature. You can find average fuel economy and average speed in the odometer, but nothing else. And forget about driver aids such as blind-spot monitoring, automatic emergency braking, etc., which aren’t available at all. The Frontier also underperforms in the IIHS small overlap frontal crash test, too.

None of that is really surprising, though. A new powertrain was never going to be enough to make the 2020 Nissan Frontier a midsize truck for everyone. If you want or need more modern safety and convenience features, definitely wait for the next-generation, which should rectify those issues, or go with a different midsize pickup. But if you can look past that, and want a powerful, comfortable truck in a very manageable size, the 2020 Frontier is the best example of Nissan’s pickup yet, and it’s worth a second look.

Truckers have cleaner records than many other working drivers: report –...