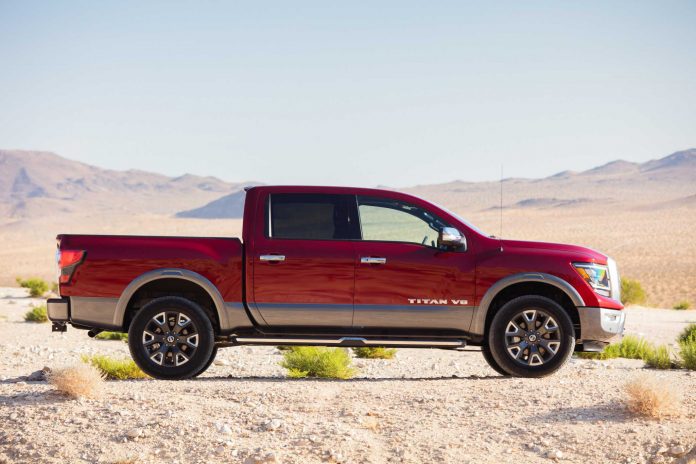 We didn’t expect to get the warm fuzzies for the Nissan Titan crew-cab pickup truck, especially upon discovering it was built for off-road capabilities, including all-terrain tires ill suited for highway driving. But after just a few miles of highway and suburban driving in western Connecticut, we moved it up to third place among our favorite pickup trucks, trailing only the medium-sized Honda Ridgeline and full-sized Ram 1500.

What changed? Well, we’d never driven a Titan before, though we test-drove a Nissan Armada two years ago. The Armada is beefy sport-utility vehicle built on the same platform as the Titan. It didn’t make a great impression on us, though we were able to understand its appeal. The relatively small subset of drivers who need to tow very heavy trailers, may occasionally go off-road, and want a fairly comfortable ride, gravitate toward heavy-duty rigs like the Armada.

The Titan impressed us immediately with its placid, quiet ride and its competent handling. Thanks in part to its acoustic laminated glass, which Nissan says “drastically cuts down on high-frequency wind noise,” the Titan is one of the quietest trucks we’ve driven.

Built in Canton, Miss., the Titan is available as a king cab or crew cab. The base Titan King Cab S starts at $36,100 with rear-wheel drive. All Titans come with the class-leading 400-horsepower Endurance V-8 engine and 9-speed automatic transmission.

Nissan strives to set the Titan apart from the competition, in part, by making the big, powerful V-8 engine standard equipment. For example, the least expensive Chevrolet Silverado king cab starts about $8,000 less than the base Titan, but it also has a lot less punch — a 2.7-liter, 310-horsepower turbocharged inline Four, compared with the Titan’s muscular 400-horsepower V-8. The lowest-priced Chevy also is a work truck whose accoutrements don’t stack up well against the Titan’s.

Equipped with all-wheel drive, the Chevy delivers better fuel economy — 19 mpg, 22 city, compared with the Titan’s 15/21. But the Titan’s mileage is far superior to the comparable Tundra’s: 13/17.

Another strong suit for Nissan’s entry in the full-sized pickup-truck sweepstakes is an unusually comprehensive warranty: five years and 100,000 miles, bumper to bumper.

Major competitors, in addition to the Tundra, are the Silverado, GMC Sierra, Ford F150 and Ram 1500. Nissan also builds a midsize pickup truck, the Frontier.

Steven Macoy (semacoy@gmail.com) is a longtime car enthusiast and full-time editor who lives in Bethel.