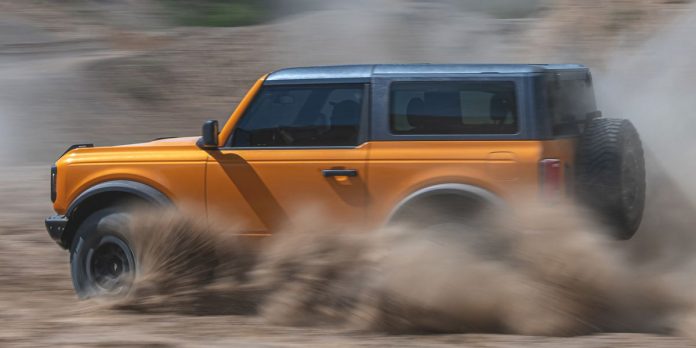 Details on the new 2021 Ford Bronco have been trickling out slowly, ahead of the truck hitting showrooms next year. From its initial reveal to the many hidden Easter eggs to Ford’s parade of accessory-laden concepts, anticipation is boiling over—to the point that more than 165,000 hand raisers have already put their name (and $100) down for one. While the hype will surely continue until we actually drive the new Bronco in a few months, we can confirm a new key piece of info after briefly riding in an early pre-production model: It’s going to be as good off-road as we thought it might be.

Our passenger-seat time was limited, lasting only 10 minutes over roughly two miles of trails and obstacles in southeastern Michigan’s Holly Oaks ORV Park. Our ridealong was in a two-door Badlands model, one of the Bronco’s more dedicated off-road configurations with 33-inch all-terrain tires, electronically locking front and rear differentials, and a hydraulically actuated front anti-roll bar disconnect. An available Sasquatch package with 35-inch mud-terrain rubber looks very imposing. The Bronco’s standard 270-hp turbocharged 2.3-liter inline-four with a seven-speed manual transmission got us around. A two-door Jeep Wrangler Rubicon with its standard 285-hp 3.6-liter V-6 and six-speed stick serves as the closest point of reference.

The Bronco’s larger dimensions versus the Wrangler are immediately apparent. At 100.4 inches, the two-door Bronco’s wheelbase is 3.6 inches longer than the Jeep’s, and the Badland’s 76.3-inch width is 2.5 inches wider than the Rubicon’s. It’s not full-size-pickup big, but expect to incur some woodlands pinstriping when branches claw into the paint on narrow two-tracks.

The larger size means more interior space than the Jeep. You won’t feel crowded by the dashboard or rub elbows with the front-seat passenger. However, we did find the sharp-edged lid of the Bronco’s center-console bin to be ideally positioned for whacking your funny bone. Passenger grab handles on the dash and console are welcome if a bit of a stretch to reach. This is a prototype, so it’s not up to production levels of fit and finish, but the Bronco’s switchgear and ergonomic layout are familiar Ford fare, and everything we touched and looked at seemed satisfyingly utilitarian. Smart packaging results in an impressive amount of room to stretch out in the back seat of the two-door, along with a decently sized cargo hold.

From our experience with the latest Wrangler and our ride in the Bronco, it seems like the Bronco is more stable, likely due to its wider stance and independent front suspension. A Wrangler may have a similarly high degree of capability in the dirt, but its solid front axle inhibits ride quality, and its recirculating-ball steering makes for a vague front end. The last two-door Rubicon we drove felt spooky enough at speed to warrant two hands on the wheel and didn’t inspire a lot of confidence when sliding around on dirt roads.

From the right seat, the Bronco felt planted and composed—and rather comfortable—as the driver tossed it into tight, sandy switchbacks and drifted up hillsides. Granted, the carefully laid-out course at Holly Oaks was no Rubicon Trail, which Ford’s development drivers have already conquered in the Bronco. But the venue did reveal the Badlands’ agility and body control, as well as good bump absorption on hard hits. To drive that home, our driver bounced over a couple of angled concrete slabs.

The controls for the locking diffs and disconnecting anti-roll bar are located on the center stack and within easy reach. The disconnect was only activated once during our stint to highlight the Bronco’s wheel articulation over chassis-twisting ridges, but the rear locker was a boon for traction in the soft sand. The G.O.A.T. (Go Over Any Terrain) terrain-mode selector dial (with seven settings in the Badlands) is placed on the console behind the shift lever, although our entire trek was done in the Sand mode.

With 310 pound-feet of torque, the 2.3-liter four has plenty of low-down grunt yet still pulled well at higher revs as we crested steep ascents. We can’t comment yet on the optional 310-hp 2.7-liter EcoBoost V-6 nor on the available 10-speed automatic, which comes standard with the six and is optional on the four. The most that we could gather about the seven-speed manual is that it seemed to easily slot into gear. The stick’s dogleg first gear serves as an ultra-low “crawler” ratio and works well for slow, technical driving over rocks and ruts.

Ford also let us ride in the Bronco Sport Badlands. For something based on the Escape and without the long-travel suspension and big tires of the big Bronco, the “baby Bronco” surprised us with its sure-footed capability as it tackled some of the same trails as the big truck. Fitted with the optional 250-hp 2.0-liter four and eight-speed automatic, the pre-production Sport had plenty of power. But more interesting was the deep, throaty engine note that played through its stereo speakers and gave the impression of more than four cylinders under the hood. The Ford folks we pressed for an explanation were stingy on specifics but noted that the Sport is closer to production than the prototype two-door we experienced. The prototype’s 2.3-liter four had the buzzy thrum of a four-cylinder Mustang, but it’s likely that it’ll sound better when it reaches production. Here’s hoping the production Bronco sounds as tough as the Sport.

We won’t be able to verify that until we drive the Bronco ourselves next year. And we won’t know for certain how it compares to the Wrangler until we hit the sand, mud, and trails with them both side by side. But our preview ride did put to rest any doubts that Ford is serious about fighting the Wrangler in the dirt and on the trails.

Here are the steps Hyundai-Kia is taking towards hydrogen cars