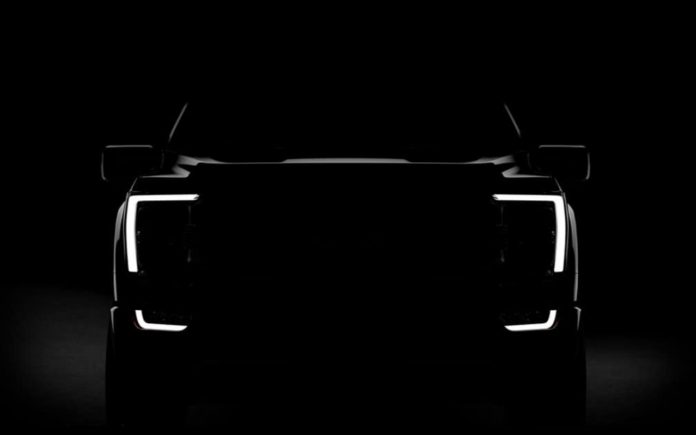 Ford will double down on tech and cabin features in the new 2021 F-150, though the biggest changes to the best-selling pickup look set to be hidden from sight. The automaker plans to reveal the new truck on June 25, though a combination of leaked and early-announced features have already given us a solid idea of what to expect.

It’s clearly a big deal for Ford. The F-150 remains the US’ best-selling vehicle, and it’s a perennial cash-cow for the American automaker. Recent iterations have seen not only a switch from steel to aluminum for the body, but an expansion of the F-150 into categories more commonly associated with luxury vehicles.

Just as much, though, we’ve seen the rest of the truck industry attempt to do the same, and at this point the current thirteenth-generation F-150 is looking a little dated in places compared to its rivals. The dashboard in particular has been out-maneuvered by Ram and others, with what looked like a decent-sized touchscreen back at its 2015 debut now feeling somewhat small.

Ford will address that with its latest SYNC 4 infotainment system – as previewed already in the new Mustang Mach-E electric crossover – which supports up to 15.5-inch displays. Embedded 4G LTE with WiFi hotspot and app support are also on the cards.

Keeping all that running, and indeed underpinning the entire new fourteenth-generation F-150, will be a brand new electronics architecture. Known as FNV-2, or Fully Networked Vehicle 2, it’s the same platform as Ford has used on the Mustang Mach-E. It means that different modules that make up the truck can be individually updated, using an over-the-air (OTA) system.

In the case of the electric Mustang, Ford’s big boast is that every piece of the car can be modified using FNV-2 and OTA updates. It remains to be seen if the new F-150 takes the same approach, though it’s hard to imagine not using the flagship technology on its flagship pickup. That goes doubly so when you consider that Ford will be able to offer integration with F-150 fleets to businesses wanting remote monitoring and management.

More visible to individual drivers will be new features intended to raise the 2021 F-150’s comfort game. That will include a lay-flat passenger seat comparable, sources tell Reuters, to the flexible seating in first class plane cabins. “You can basically live in the truck,” the unnamed source suggested.

Outside, meanwhile, the expectation is that Ford won’t stray too far from the current generation of truck. Expect it to be crisper and bolder, though; a new teaser image spotted on Ford’s homepage by the F150gen14 forum suggests sharper hood angles and a more distinctive light signature. That’s not necessarily going to feature on every trim, of course.

One big lingering question is whether the new F-150 will feature Ford’s freshly-announced Active Drive Assist system. Confirmed so far only for the Mustang Mach-E, it’s an advanced driver assistance system that combines adaptive cruise control and lane-keeping on divided highways, relying on an attention-monitoring camera so that the driver need not keep their hands on the steering wheel.

It’s another feature that taps into FNV-2, though the Mustang Mach-E will need an extra Prep Package in order to support the new ADAS. The software itself won’t be available for the EV until the second half of 2021, Ford has said, though it will allow buyers of the crossover to order their vehicles with the Prep Package from the factory from day one. Ford could take a similar approach with the 2021 F-150, which is expected to begin production later in 2020. An all-electric version of the pickup will follow within the next two years, Ford has promised.