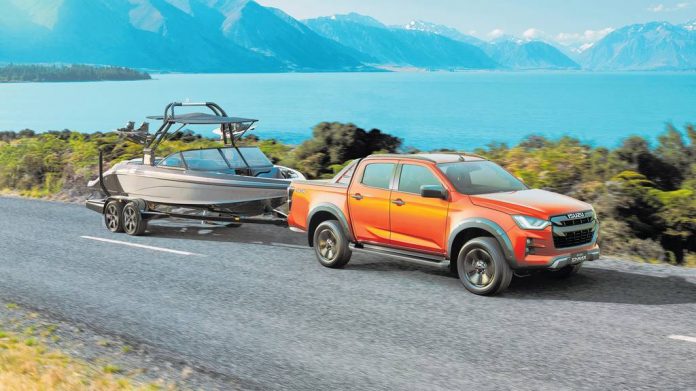 Isuzu Ute has proven one of the Australian auto industry’s greatest overachievers since arriving in 2008.

The truck company offshoot does one thing and does it well — produce rugged, go anywhere vehicles — which has won it many fans in the ute market.

Despite an ageing model, the D-Max still makes up around 7 per cent of all utes sold in Australia so far this year — but it has greater plans for the third-generation D-Max.

The brand says it’s shooting for a 10 per cent slice of the pie, which would put it right amongst the Mitsubishi Triton and Nissan Navara ute stalwarts.

It’s certainly put a lot of effort into the first all-new D-Max in eight years: six years and 4 million kilometres of testing, with Australian tastes well and truly front of mind.

Despite our small population, Australia is of major importance to Isuzu due being its biggest export market from its Thai factory.

As such, we’re the second country to get the new D-Max behind Thailand.

Once again, we get a 3.0-litre four-cylinder turbo diesel unique to our market, however outputs have been bumped up 10kW and 20Nm to 140kW and 450Nm.

As respected as the outgoing engine is, it’s always been a tad noisy and agricultural sounding.

Hence, Isuzu has added a heap of measures to keep the noise down — which is good for in cabin serenity, but has seen fuel use rise fractionally in higher spec offerings.

Switching to 4L simply requires coming to a stop, putting the gear selector into neutral and then turning a dial.

There’s up to 800mm wading depth, the same three-leaf rear suspension set-up as its predecessor, and trailer sway control is standard.

In fact, even though safety gear may make many off-roaders’ eyes glaze over with boredom, it’s seriously one of the new D-Max’s most impressive traits.

Isuzu has made its Intelligent Driver Assistance System standard across the range — yes, even the single cab chassis bulding site entry model — and it’s got some seriously impressive kit for any vehicle, let alone a ute.

It uses a binocular camera system to offer the usual modern day features, but also turn assist to stop you from crossing into another vehicle’s path, driver attention assist to detect when you’re getting drowsy or distracted and lane departure prevention which will resist you changing lanes if your indicator isn’t on.

There’s also a centre airbag for the first time in a ute.

Thankfully, the safety modes can be turned off when off-roading, before automatically turning themselves back on when the vehicle is restarted.

It’s not just the standard safety gear which has been improved.

The entry-level SX 4×2 is available in all three D-Max body types: single cab, space cab and crew cab, all high riders (the low rider variant has been dropped).

The single cab-chassis has the traits a tradies and fleet managers want — a 1.3-tonne payload, 2550mm alloy or steel tray, easy wipe down vinyl floor etc — but also the aforementioned safety gear plus niceties such as a seven-inch infotainment display, voice recognition, digital radio, the highest resolution screen available in a ute, Android Auto and even wireless Apple CarPlay.

It even has a reach adjustable steering wheel, hopefully the new normal for utes going forward.

The LS-U can be had as either a crew cab or space cab and adds leather steering wheel and gear knob, 9-inch infotainment display, some eadditional speakers, electric lumbar support for the driver, dual zone air-conditioning with rear air vents on crew cab, rear park sensors (one of the only safety items not standard across th erange) and more.

The fourth and range-topping variant, the X-Terrain, has its eye squarely on buyers of upper end utes such as the Ford Ramger XLT and Toyota Hilux SR5.

It scores remote engine start, locks itself when the driver walks away, liano black and leather interior, matt black roller tonneau cover, sports bar, front and rear underbody spoilers, front and parking sensors and other styling tweaks to stand out from its stablemates.

The additions do see the payload drop to 970kg.

Of course, pitching the D-Max as more of an upmarket vehicle has had an impact on price.

All models have had a price hike. The current range-topping D-Max LS-T is $54,800 plus on road costs; the X-Terrain is $62,990, though Isuzu says the equipment levels mean the now discontinued LS-T shouldn’t be compared, and it also has an introductory price of $58,990 drive-away for the X-Terrain.

It’s important given the D-Max is the second biggest selling 4×2 ute this year.

Isuzu says its customers are loyal and won’t mind the price increases, especially given the D-Max’s strong resale value.

It’s also worth noting the new D-Max has the same six-year warranty/150,000km warranty, seven-year roadside assist and seven year capped price servicing program as before, but the cost of servicing has dropped roughly 12 per cent on the outgoing model.

Though nothing was confirmed, Isuzu execs said they were open to introducing a “super-ute” variant above the X-Terrain to rival the likes of the Ranger Raptor, should buyer demand be there.

We’re scheduled to drive the new D-Max later this month, stay tuned for our first impressions.

Best commuter bikes: Our pick of the best bikes for your...