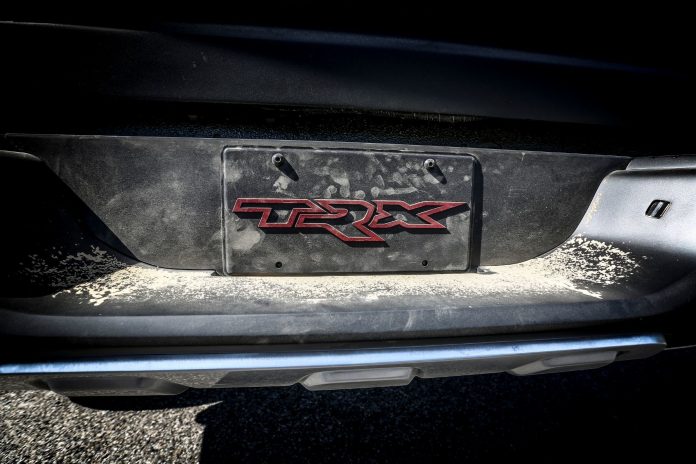 It’s finally official. The 2021 Ram 1500 TRX will debut Monday, August 17 via an online streaming event. The Ram TRX – named after, what else, a Tyrannosaurus Rex or T-Rex – was first seen as a concept a few years ago. Back then, it was called the Rebel TRX and had the Ford F-150 Raptor affixed firmly in its sights.

However, we’re not entirely sure why Ram took its sweet time in giving the go-signal for production. And after a multitude of teaser videos and spy shots on social media, the 2021 Ram TRX is finally debuting this Monday at noon EDT (9 a.m. PDT) via Ram’s official Facebook page and YouTube channel.

The 2021 Ram 1500 TRX is a high-performance derivative of the standard 1500 truck. Unfortunately, Ram has been secretive in dishing out the specs and standard equipment before the debut, but here is what we think will happen on Monday.

For starters, it might come with a standard Hemi V8 like in the Rebel TRX Concept. The first-generation Ford Raptor also came with a V8, but it now has a twin-turbocharged EcoBoost V6 that is shares with the Ford GT supercar. But for the Ram TRX, the rumor mill suggests a 6.2-liter V8 with 707 horsepower, the same motor found in the Dodge Challenger and Charger Hellcat models.

Ram might also shoehorn the Challenger Hellcat Redeye’s V8 with 797 horsepower into the engine bay. If this is the case, we’re expecting both V8 motors to come with an eight-speed automatic gearbox (hoping to a 10-speed) and a high-performance 4×4 drivetrain.

Of course, there’s also the possibility of fitting an optional and less-powerful Hemi V8, or maybe an enhanced 3.6-liter Pentastar V6 for the base model. One thing is probably for sure, though: You can’t have a manual transmission in the new Ram TRX, but it wouldn’t hurt to plead.

If Looks Could Kill

As expected, the Ram TRX has all the necessary ingredients of a badass truck. We expect the Rebel TRX to be festooned with muscular fenders and wheel arch extensions to look the part. If the production model stays true to the concept, you can also expect a Dynatrac Pro 60 rear axle (complete with an electronic locking differential) and an open differential front axle. We imagine Ram will also include all the necessary accessories to accompany your overlanding adventures.

The 2021 Ram 1500 TRX is debuting on Monday, August 17th. Official pricing is still forthcoming, but we estimate a base Ram TRX with the V6 engine to start at $43,000, while the more power Hemi V8 models will have base prices starting at around $54,000. The first deliveries are expected to arrive in early 2021.

Alvin Reyes is the Associate Editor of Automoblog. He studied civil aviation, aeronautics, and accountancy in his younger years and is still very much smitten to his former Lancer GSR and Galant SS. He also likes fried chicken, music, and herbal medicine.