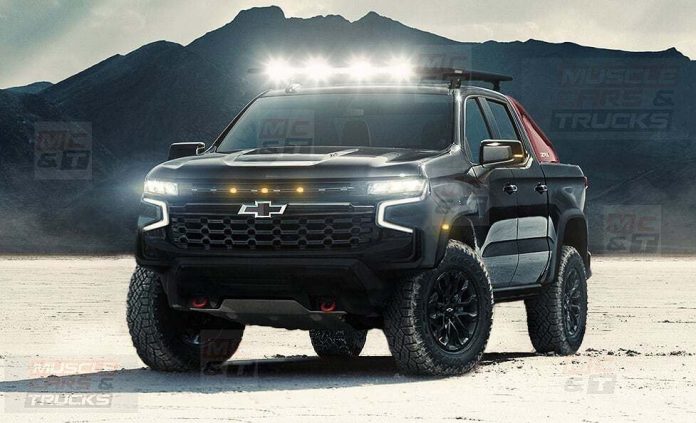 MC&T is proud to share exclusive details today of an upcoming off-road full-size truck from General Motors, the Silverado ZR2. Foremost, the 2023 Chevrolet Silverado ZR2 won’t quite be the Ram TRX or Ford F-150 Raptor hunter that GM fans want, but that’s not to say it’s not worth getting excited about. Chevrolet has proven that they can build a class-leading off-road pickup truck with the Colorado ZR2, and the brand aims to supersize that recipe.

Here are the details. For starters, the 2023 Chevrolet Silverado ZR2 will feature improved off-road suspension, and next-generation Multimatic DSSV dampers – a little different than what we see today. The full-size truck will also feature rear and front electronic locking differentials, as well as improved approach and departure angles thanks to unique rear and front bumper designs. And since it’s arriving a model year after the 2022 Silverado refresh, It will have a revised center console in the interior, as well as a nip/tuck to the front and rear fascias. Our proprietary rendering above predicts what the truck will look like.

Unfortunately, as is the case with the 2021 Tahoe Z71 and Suburban Z71, the Silverado ZR2 will not offer the 3.0L LM2 Duramax diesel engine. This is due to packaging constraints from tapering the lower front fascia for improved approach angles. Under the hood will be gas engines only, capped by the 6.2L L87 V8 engine and 10-speed automatic transmission. That’s good enough for 420 horsepower and 460 lb-ft of torque.

The upcoming Silverado ZR2 was previewed at the 2019 SEMA Show, under the guise of a Chad Hall Racing truck. The upfitted Silverado 1500 featured DSSV dampers, a unique suspension, underbody plating, and BFG all-terrain tires. It did not have the updated bodywork, however. Below is a video of Chad Hall himself talking to Zane Merva of GM-Trucks from March 2020 that hints at the tech transfer going on from dirt track to street:

The Silverado ZR2 program was forced to punt to the 2023 model year due to COVID delays, after initially being targeted for 2022. That means that the big ZR2 will hit the market in the 2022 calendar year. Similarly, the T1 refresh that was in place for the Silverado and Sierra for the 2021 model year is now for 2022. Delays like this can be found throughout the General Motors lineup, and the rest of the industry.

You might be wondering what happened to the “ZRX” name that was being thrown around for the past year or so. In short, General Motors may have trademarked it, but it would appear that the Chevrolet marketing team decided that the ZR2 nomenclature was perfectly fine. In this case, they’re right. ZRX didn’t seem to be necessary, for two reasons. One being that the ZR2 has come into its own as being recognized as an off-road mountain goat in regards to the Chevrolet Colorado ZR2 midsized truck. The second is that with the 2021 Ram TRX being readied by the other team, ‘ZRX’ was simply too close, and simply too confusing. At least they learned from Bolt/Volt, right?

Speaking of Ram TRX, don’t expect the 2023 Chevrolet Silverado ZR2 to keep up with it in the wide open dunes. The horsepower difference will be that of several hundred, as the ZR2 will not offer any engine upgrades over what is currently seen with the 5.3L L84 and 6.2L L87 V8 engines. In a sense this seems a bit odd, as most enthusiasts in the half-ton truck market seem to gravitate to the opened-out, pre-runner Baja truck type of fun off the road. And on the road, they simply can’t have enough horsepower. Just ask Ram why they even put a Hellcat in the TRX in the first place.

GM has a supercharged Silverado on proposal, which would be more in line with the market (as in: demand, sales, profits, growth, customer satisfaction), but we’re not sure how this big truck brushes with their “All Electric Future™“.

Compared to recent reports coming out about what’s powering the next-generation Ford F-150 Raptor, as well as reports that Ram will eventually offer a non-supercharged version of the TRX, The Silverado ZR2 could match up rather nicely with these two trucks. It’s alleged that Ford will offer a PowerBoost Hybrid V6 system and 10-speed automatic as the base powertrain in the Raptor, which could push out power numbers of around 500 hp and 600 lb-ft of torque, but truck enthusiasts will still say it’s missing two cylinders. Meanwhile, FCA will likely take a more simplistic approach, and drop the beloved 392 Hemi V8 paired with a TorqueFlite 8-speed transmission into the engine bay of a more basic Ram 1500 TRX. The 6.4L Apache V8 Hemi engine is traditionally good for 485 hp and 475 lb-ft of torque.

Pricing for the 2023 Chevrolet Silverado ZR2 is still too early to determine, but since the Trailboss starts a little over $50,000, we’re targeting the truck to come in at least below $60,000. Considering what Ford and Ram are cooking up to fill in the space below their $70,000+ supercharged V8 trucks as outlined above, this is simply going to be too much money.

It’s unlikely that half-ton truck enthusiasts will be very forgiving to a pickup that’s down on power compared to the segment. Nor will they be happy to realize that they will have a hard time tuning it on their own, thanks to the implementation of GM’s Global B electrical architecture. Chevrolet will have to figure out how to create superior value with this upcoming truck. Because if they don’t, they risk flopping in a market that seemingly has no end to its appetite for horsepower and off-road hardware. The ace up the sleeve could be a potential Silverado ZR2 Bison, as it’s been hinted from Chevrolet marketing officials that they seek to do more business with American Expedition Vehicles. Guess we’ll have to wait and see.

Digging for a living – Owner//Driver