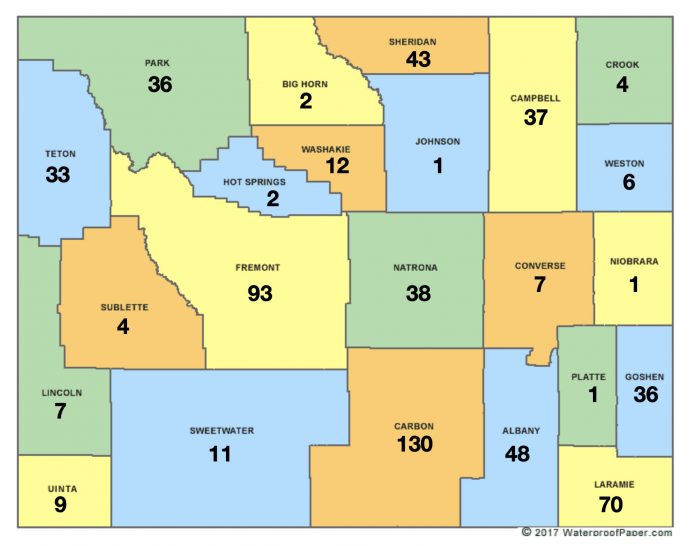 Editor’s Note: This is a map of the active coronavirus cases in each county across Wyoming. The number of active cases is determined by subtracting the total number of recoveries seen since the illness first reached Wyoming in mid-March from the total number of confirmed and probable cases diagnosed during the same time period and taking into account deaths related to the disease.

The number of active coronavirus cases in Wyoming dropped by nine on Saturday as only six counties reported new laboratory-confirmed cases.

Figures from the Wyoming Department of Health’s daily coronavirus update showed that 14 new laboratory-confirmed and seven probable cases were reported Saturday, while the number of people to recover from the illness since it was first diagnosed in the state increased by 30.

As a result, the number of Wyoming residents still sick with the illness fell by nine to total 631.

Carbon County had 130 active cases; Fremont County had 93; Laramie had 70; Albany had 48; Sheridan had 43; Natrona had 38; Campbell had 37; Goshen and Park had 36; Teton had 33; Washakie had 12; Sweetwater had 11; Uinta had nine; Converse and Lincoln had seven; Weston had six; Crook and Sublette had four; Big Horn and Hot Springs had two, and Johnson, Niobrara and Platte had one.

The active cases were found among 536 people with laboratory-confirmed cases and 95 with probable cases.

The number of laboratory-confirmed cases seen since the pandemic began in March increased by 14 on Saturday to total 3,210, with new cases reported in Campbell, Carbon, Lincoln, Natrona, Sheridan and Teton counties. Carbon County saw the largest growth in cases at five.

The number of probable cases, where a patient has coronavirus symptoms and has been in contact with someone with a confirmed case but has not been tested, increased by seven to total 574.

The Department of Health reported that of the 3,784 people infected with coronavirus since March, 3,116 have recovered, including 2,637 patients with confirmed cases and 479 with probable cases.

Experts weigh in on the program militarizing American cops