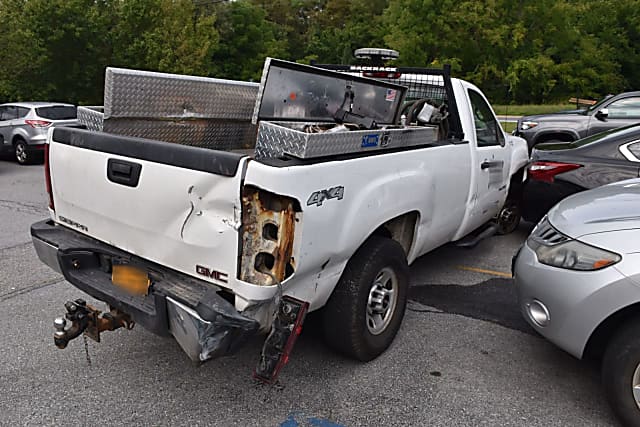 A 23-year-old man driving a stolen pickup truck was arrested after taking New York State Police troopers on a chase on the Taconic State Parkway, nearly striking several pedestrians before crashing into a parked car and attempting to flee on foot.

Troopers blocking a lane on the parkway for the New York State Department of Transportation in Dutchess County at approximately 9:15 a.m. on Wednesday, Aug. 19 in LaGrange attempted to stop a driver in a work zone for violating traffic laws.

Police said that the driver, later identified as Rome, New York resident Andre-Pierre Cadrette failed to comply with troopers attempting to pull him over, and proceeded to speed away.

Cadrette struck a guard rail and went on to exit the parkway onto Route 82, police said. He proceeded to flee to the Kimberly Korners Shopping Center nearly striking several pedestrians before crashing into an unattended parked vehicle.

After striking the parked car, police said that Cadrette attempted to flee on foot, but was taken into custody by troopers without further incident.

According to police, further investigation determined that the pickup truck had been stolen from Poughkeepsie earlier in the morning and that Cadrette also was involved in a hit-and-run crash in Wappinger before the police chase.

Cadrette was charged with criminal possession of stolen property, reckless endangerment, and reckless driving. He was issued an appearance ticket following his arrest and is scheduled to appear in the Town of Lagrange Court on Tuesday, Sept. 1 before being transported to the Mid-Hudson Regional Hospital for evaluation.