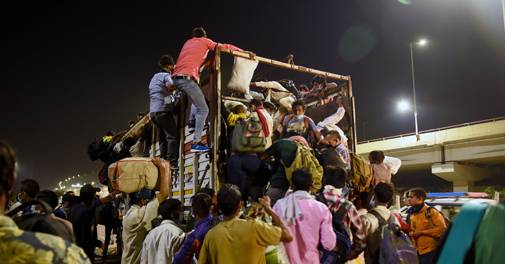 Auraiya accident: The incident took place at around 3 am on early Saturday morning. The truck was coming from Rajasthan. All the labourers were mostly from Bihar, Rajasthan and West Bengal

At least 24 migrant workers were killed and 15 critically injured after a truck they were travelling in collided with another lorry in Uttar Pradesh’s Auraiya district on Saturday.

“24 people have been brought dead, 22 have been admitted to hospital and 15 labourers have been referred to Safai PGI,” Archana Srivastava, chief medical officer, Auraiya told ANI.

The incident took place at around 3 am on early Saturday morning. The truck was coming from Rajasthan. All the labourers were mostly from Bihar, Rajasthan and West Bengal.

Srivastava added that the migrant labourers were going to Bihar and Jharkhand from Rajasthan.

Meanwhile, UP Chief Minister Yogi Adityanath has directed the commissioner and Inspector General of Kanpur to visit the accident site and submit a report on it.

Additional Chief Secretary (Home) Awanish Awasthi told the news agency that CM Adityanath has given directions that all injured be provided medical care. ” The CM has asked the Commission and IG Kanpur to visit the site and give a report on the cause of accident immediately,” Awasthi added.

The CM also wrote, “Instructions have also been given to provide all possible relief to the victims and to get a quick investigation of the accident”.