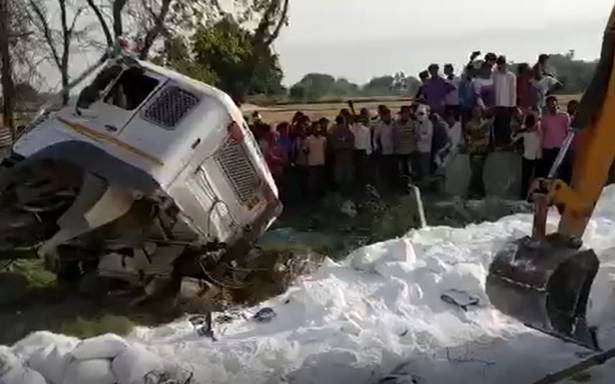 Twenty-five migrant workers were killed and several injured when a trailer truck they were travelling in rammed into a supply lorry near Auraiya in Uttar Pradesh early on Saturday, said police.

The larger trailer truck, laden with bags of supply material, was coming from Rajasthan. The supply truck, which was going from Delhi to Madhya Pradesh, had stopped near a dhaba on the side of the highway near Chiruhali, when the trailer, which allegedly carried over 50 persons, rammed into it from behind. Both vehicles overturned, police said.

“A big truck laden with cement bags and Rajasthan number plate, rammed into it from behind,” said the DM. “Maybe the driver fell asleep,” he added.

An injured woman said they had stopped the vehicle so that they could attend the call of nature and for refreshments.

Of the deceased, 12 belonged to Jharkhand, four to West Bengal (4) and two each were from Bihar and U.P. Many of the injured were from M.P. Fifteen seriously injured were shifted to the Saifai Medical College.

ADGP Jai Narayan Singh said it would be investigated how so many people were on the truck.

Eyewitnesses told local media that the trailer hit the supply truck in high speed, following which both fell into a nearby ditch. Many of the migrants were sleeping on the trailer.

Also read: 16 migrant workers run over by goods train near Aurangabad in Maharashtra

Two station in charge officers under whose jurisdiction the accident took place have been suspended.

Chief Minister Yogi Adityanath has instructed the police to file cases against the owners of the two vehicles and seize the vehicles. He appealed to migrant workers not to risk their lives by walking back home or boarding illegal and unsafe means of transportation.

In a high-level meeting, he instructed officials in border districts to not allow any migrant worker to walk back or board any truck or motorcycle. Such vehicles running unlawfully would be immediately seized.

Awanish Awasthi, Additional Chief Secretary Home, later issued an order instructing buses that are returning empty after dropping migrants home to pick up those walking on the highways and drop them near close to their districts on highways.

Mr. Adityanath expressed his condolences to the families of the deceased.

An immediate clarification had been sought from Additional SP and SSP Mathura, and SSP and Additional SP Agra, along with ADG Agra and IG Agra, said a government spokesperson. Agra and Mathura have borders with Rajasthan.

Samajwadi Party president Akhilesh Yadav announced that his party would provide a compensation of ₹1 lakh each to the kin of those killed.

You have reached your limit for free articles this month.

Find mobile-friendly version of articles from the day’s newspaper in one easy-to-read list.

Enjoy reading as many articles as you wish without any limitations.

A select list of articles that match your interests and tastes.

Move smoothly between articles as our pages load instantly.

A one-stop-shop for seeing the latest updates, and managing your preferences.

We brief you on the latest and most important developments, three times a day.

Not convinced? Know why you should pay for news.

*Our Digital Subscription plans do not currently include the e-paper ,crossword, iPhone, iPad mobile applications and print. Our plans enhance your reading experience.

Man hospitalized, in serious condition after he was shot near his...