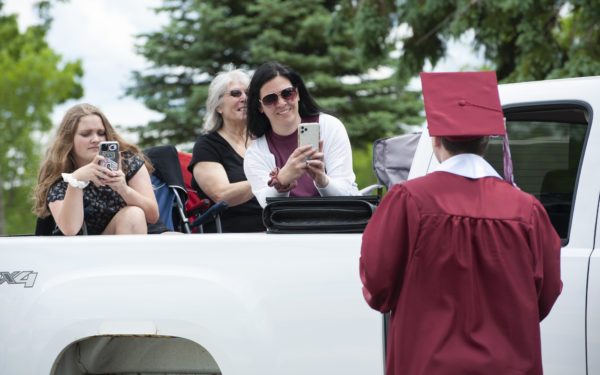 A family takes photos of a graduate from the back of a truck during a drive-thru graduation ceremony at Bangor High School on June 14.

The BDN is making the most crucial coverage of the coronavirus pandemic and its economic impact in Maine free for all readers. Click here for all coronavirus stories. You can join others committed to safeguarding this vital public service by purchasing a subscription or donating directly to the newsroom.

Much of the typical pomp and circumstance of a high school graduation was on display Sunday at Bangor High School, with students wearing gaps and gowns, and balloons and streamers fluttering in the breeze. But the ceremony itself was far from typical.

It was the school’s first drive-thru graduation ceremony — a new type of event in which graduating seniors line up in cars and hop out one at a time to get their diplomas from school officials. Many Maine high schools have adopted such ceremonies this year due to the global COVID-19 pandemic and a ban by Gov. Janet Mills on gatherings of more than 50 people.

A Bangor High School graduate sits in the front seat of a car during the drive-thru graduation ceremony on June 14.

Other high schools in Belfast, Bar Harbor, Naples, Rockland and South Paris also have had similar drive-thru graduation ceremonies, two of which were held at small local airports and two at the Bridgton Twin Drive-In movie theater. Other high schools have divided their graduating classes into small, separate groups, each with its own ceremony, in order to reduce physical contact between the participants.

Melissa Tian waits for her name to be called during a drive-thru graduation ceremony at Bangor High School on June 14.

On Sunday at Bangor High School, instead of tightly packed rows and rows of folding chairs, the main formation at the ceremony was a line a cars, trucks and vans that slowly rolled by the school’s front entrance as each member of the Class of 2020 got out, had their name read aloud and was congratulated by school officials, and then returned to their families in their cars waiting nearby.

Before the procession got rolling around 1:30 p.m., graduates and their families waited in cars near the school’s Grandview Avenue entrance and listened to short speeches given by class leaders and school officials and broadcast live on WZON radio. There was some applause with vocal cheers in response to the remarks, but most of it was drowned out by attendees honking their car and truck horns in approval at the south end of the school’s entrance road.

A ’20 tassel hangs on a graduation cap at Bangor High School on June 14.

Principal Paul Butler noted how challenging the past three months have been for students and staff alike — as they have for everyone — since schools in the city and across Maine shut down and shifted to remote learning.

Rebecca Chappelle’s family celebrates in the back of a pickup truck during the drive-thru graduation ceremony at Bangor High School on June 14.

“I welcome everybody to a unique but nonetheless special closure to a remarkably difficult year … for a graduating class that is remarkably strong and resilient,” Butler said.

He also recognized that as difficult as it has been for students and staff to miss out on each other’s company, the unusual ceremony was an opportunity to have a little fun.

A family cheers and snaps photos from a hatchback during Bangor High School’s drive-thru graduation ceremony on June 14.

“At this point, I am so excited because there was a period in my life where I occasionally watched NASCAR,” the principal said. “And I’ve been really excited to announce it would be a great time to start your engines.”

Some seniors rode in large, rented passenger vans that could carry a lot of people, and others rode in pickup trucks with relatives sitting in folding chairs set up in the back. A few, including some who rode through the procession in antique automobiles, took a cue from Butler’s NASCAR comment and had their drivers rev their engines, as if they were eager to move on to their post-high school lives.

Ezra Hamer-Nagle, right, dances in the car during a drive-thru graduation ceremony at Bangor High School on June 14.

After the procession got underway and some students had hopped out of their families’ cars to have their names announced and pictures taken, a few seniors mused about the odd circumstances of how their high school careers have ended.

Seated in the rear passenger seat of his family car, Cameron Hopkins said he was glad to participate in the unconventional ceremony. He said he was not disappointed with the way the spring term of his senior year had played out.

Families of Bangor High School students sit in parked cars at the beginning of a drive- thru graduation ceremony on June 14.

“It’s very unusual,” he said. “I am proud of what Bangor High School has done this year” by continuing to serve its students despite the pandemic.

Morgan McGraw-Low said she was disappointed her fellow seniors and their families couldn’t have a traditional graduation, where they could enjoy each other’s company more.

A parent looks out the window and take photos during the drive-thru graduation ceremony at Bangor High School on June 14.

“I wish they would have done it differently,” she said, adding that her whole family couldn’t make it because of the limit on cars per family. “The whole car thing is kind of weird.”

Allison Dearing, in one of two cars that her “blended” family brought to her graduation, said she was disappointed that her family couldn’t all be in one group where they all could talk to each other. But she added she had been concerned that there would be no ceremony at all.

A family takes pictures and celebrates during the drive-thru graduation ceremony at Bangor High School on June 14.

“I think it is better than I thought it would be,” Dearing said.

In another car, senior Jesse Karnes smiled when asked what he thought of his spring term and odd graduation. He focused on what he liked about it the best.

“It was pretty quick,” Karnes said with a grin.