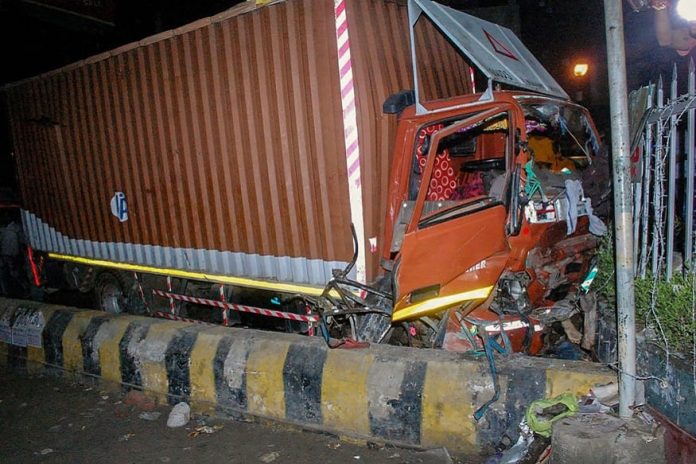 Three labourers, including a woman, who were sleeping by the roadside during their return journey to Madhya Pradesh from Rajasthan, were run over by a speeding truck on Unhel-Mohanpura Road in Ujjain district, a police official said.

Due to the lockdown, a group of 12 labourers were returning from Jaisalmer in Rajasthan. They were dropped till the Madhya Pradesh border by the Rajasthan government, from where they boarded another vehicle to reach their village- Mohanpura, in-charge of Bhairavgarh police station Jaishi Ram Barde said.

As the vehicle they boarded dropped them about 20-25 km away from their village, they decided to sleep along the road during the night, he said.

“While three of them slept by the roadside, others decided to take rest a little away from the road, which saved them,” he said.

Around 3 AM, a speeding truck ran over them, killing all three of them on the spot, Barde said.

The deceased were identified as Vikram (55) Badri Banjara (35) and Dhulibai (55), the official said, adding that after their autopsy, the bodies were handed over to their relatives.

A case under section 304 A (causing death by negligence) was registered against the truck driver, who fled from the spot but left the vehicle behind.

The state government has announced ex-gratia of Rs 4 lakh each to the three victims, Ujjain Collector Shashank Mishra said.

Support the daily wage earners who have been hit the hardest by the COVID-19 crisis. Click here to contribute to the cause. #IndiaGives

The daily News18 Coronavirus COVID-19 newsletter – Get your copy here.

3 truck drivers test positive for COVID-19 at border no new...

Council votes 4-2 to put Spears on Utility Board

How border crossings at Mutukula expose Uganda to COVID-19