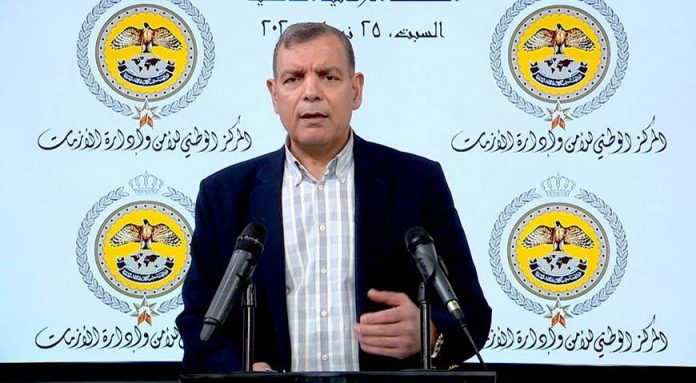 The total coronavirus caseload in the Kingdom currently stands at 444.

A total of four new COVID-19 cases were confirmed on Friday, the minister said during Friday’s press briefing, adding that the four cases include two truck drivers from a neighbouring country and two people who became infected from a driver with the virus. A total of eight patients recovered, he said, including five at King Abdullah University Hospital and three at Prince Hamzah Hospital, the Jordan News Agency, Petra, reported.

During Saturday’s press briefing at the National Centre for Security and Crisis Management, Jaber said that a total of 2,569 coronavirus tests have been conducted across the Kingdom, bringing the total number of tests conducted since the outbreak to 63,737, according to Petra.

Also speaking during the briefing, Minister of State for Media Affairs Amjad Adaileh announced that the government decided to ease curfew measures in Mafraq, some 80 kilometres northeast of Amman. The governorate will be closed to the rest of the Kingdom as of Sunday, but its residents will be allowed to leave their homes from 8am to 6pm on foot or by vehicle.

He added that authorities are considering relaxing curfew regulations in other governorates, but that next steps will depend on developments regarding the spread of the virus.

Resuming public sector work will be gradual and through successive phases, Adaileh said, emphasising that it will be identified in accordance with the recommendations of specialised teams.

A number of public sector institutions will resume work with a limited number of workers during the next week, he announced.

Monitoring teams are working intensively to detect any violation of government regulations, including illegal market practices, the media minister said, warning that legal measures will be taken against any violators.

Commenting on the daily press briefings from the ministers of health and media during the holy month of Ramadan, Adaileh said that while briefings will continue to be shared in the coming days, they will be given at varying times and in varying forms according to new developments and information.

Also speaking during the briefing, Minister of Labour Nidal Bataineh said that non-Jordanian workers who wish to return to their home countries will be allowed to leave Jordan ‘as soon as possible’ and will be exempt from residency or work permit fines, among others, he said.

He added that the registration process for departure from the Kingdom, available in Arabic and English on the platform hemayah.jo, will start on Sunday and end on May 4, Petra reported.

Lasting benefits will emerge in the Covid-19 fight

Commercial Vehicle Sales Are Ailing, So Why Is The Connected Truck...